Hogs' Moore happy to be back on the field 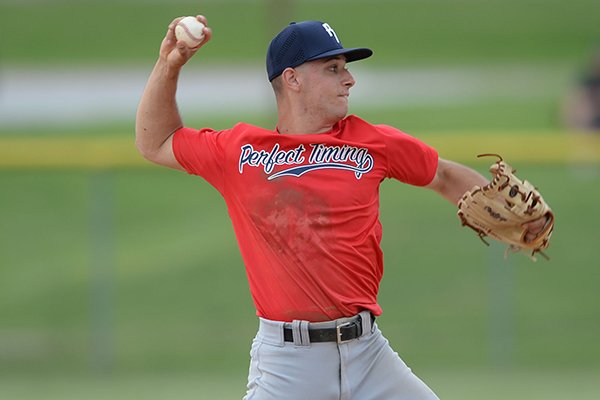 SPRINGDALE — Robert Moore was likely headed to a stellar freshman season at the University of Arkansas before his season was cut short by the covid-19 pandemic in March.

The true freshman and the son of Kansas City Royals General Manager Dayton Moore played just 16 games, but had a big impact in limited time. Moore was named the national player of the week in February, and the SEC co-freshman of the week in what turned out to be the final week of the season. On Tuesday, he was named a freshman All-American.

“A little rusty,” Moore said after his PT White team earned a 1-0 victory Tuesday in the Perfect Timing College League. “I think it will take a few days or maybe a week to get back in a rhythm.”

Moore is one of almost a dozen Arkansas baseball players in the league, giving fans starved for live sports a summer respite.

Moore played shortstop Tuesday night and worked with former Springdale Har-Ber standout Mack McCrosky to turn a pair of double plays that helped four PT White pitchers combine for the shutout. He will be shipping out to Florida in about two weeks to play in a collegiate league for the remainder of the summer.

“I have to be there June 15,” said Moore, who was back home in Kansas when he got the call of the Perfect Timing League kicking off. “I had some teammates who were playing and said they were starting June 1 here, so I called to try to get in and they were able to get me in.”

Broyles off to Florida

A familiar figure was in center field for PT Grey on Tuesday as former Fayetteville standout Thomas Broyles returned to Northwest Arkansas.

Broyles had been in Missouri finishing up his spring semester and working at a golf course when he got the call about the Perfect Timing League. A chance to get back on the field while staying at home was too good of an opportunity to pass up, he said.

“It’s been a while since I’ve been able to do much,” Broyles said. “I really haven’t had a place to hit or do much of anything since everything has been shut down.”

Broyles had a single in Tuesday’s 1-0 loss to PT White.

Broyles, who earned his bachelor’s degree in sports management at Missouri, is heading back to Florida in the fall to play at Southeastern Florida, an NAIA school where he will have two seasons of eligibility remaining.

“It’s a really good program. They were 26-1 last season and won it all the year before,” Broyles said. “They are giving me a full ride so I’m pretty excited to get school paid for. I’m a fifth-year junior. I’m getting my MBA and that’s what I wanted.”

Arkansas Razorbacks radio commentator Phil Elson was among a large number of fans at Tyson Complex on Tuesday for the second night of the Perfect Timing College League.

“It looks like everybody is really happy to have baseball right now,” Elson said. “More than anything, everybody seems relaxed. The players seem relaxed, happy. And there are more people out today than there were yesterday, which is cool. I think word got around.

The league will play games Monday through Thursday both in Springdale and in Tulsa through the first week of July.