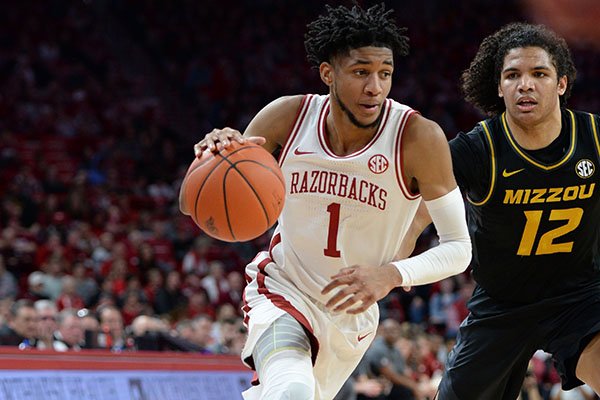 Arkansas guard Isaiah Joe (1) drives to the lane Friday, Feb. 21, 2020, as he is pressured by Missouri guard Dru Smith during the first half in Bud Walton Arena in Fayetteville.

The NBA has reportedly set a date for its 2020 draft and the NCAA a deadline for underclassmen to withdraw from the draft.

The NBA will hold the two-round draft on Oct. 15, according to ESPN NBA reporter Adrian Wojnarowski. The draft was originally set for June 25, but was postponed, along with the draft lottery and combine, due to concerns regarding the spread of covid-19.

Wojnarowski reported the draft lottery will be held on Aug. 25.

The NCAA has given underclassmen until either 10 days after the NBA draft combine or Aug. 3 — whichever comes first — to withdraw from the draft and return to college. A date for the draft combine has not been announced.

The NCAA’s original deadline was June 3, but the NCAA pushed it back to an undetermined date.

Arkansas guard Isaiah Joe, who has averaged 15.2 points per game and shot 37.8 percent from 3-point range in two seasons with the Razorbacks, declared for the draft in April. Joe did not sign an agent, according to Razorbacks coach Eric Musselman and Joe’s father, Derrick, leaving the door open for a possible return in 2020-21.

Mason Jones, who led the SEC in scoring in 2019-20, entered his name in March. He signed with an agent in May and will forego his senior season at Arkansas.

According to The Athletic’s Sam Vecenie’s latest 2020 NBA Draft Big Board, which was released on May 5, Joe is listed as the No. 70 draft-eligible player in the class. Jones came in at No. 76.

On June 3, Sports Illustrated NBA draft analyst Jeremy Woo projected Jones as the No. 56 pick to the Charlotte Hornets. Joe was not listed.