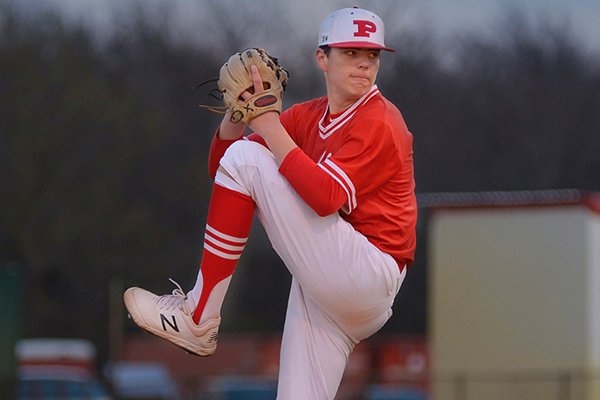 Pottsboro (Texas) pitcher Barrett Kent is shown during a 2020 game. Kent, a class of 2023 recruit, has committed to play at Arkansas.

Barrett Kent (6-4, 187 pounds) committed to the Razorbacks’ recruiting class for 2023. Kent, who is 15, said he is projected to grow around two more inches.

Kent completed his freshman year at Pottsboro High School and plays summer baseball for the Dallas Patriots. He said he was recruited by Arkansas pitching coach Matt Hobbs beginning about a month ago.

“Arkansas has always been one of my dream schools and really once they started taking interest it was a no-brainer,” Kent said.

“My parents (who attended Texas Tech) almost went there for college and both of my neighbors went and they are die-hard Razorback fans. I’ve been keeping up with them and they’ve been pushing on me.”

Kent throws a fastball, changeup and slider. His fastball has been consistently hitting 88-89 mph, he said.

As a freshman, Kent pitched in four of his varsity team’s 10 games. He recorded a 3-0 record with 27 strikeouts and pitched two complete games.

Kent is at least the fourth player to commit to the Razorbacks’ 2023 class, joining right-handed pitchers Kyler Spencer of Conway and Jared White of Southlake (Texas) Carroll, and left-handed pitcher Hayden Thomas of Lexington, S.C.