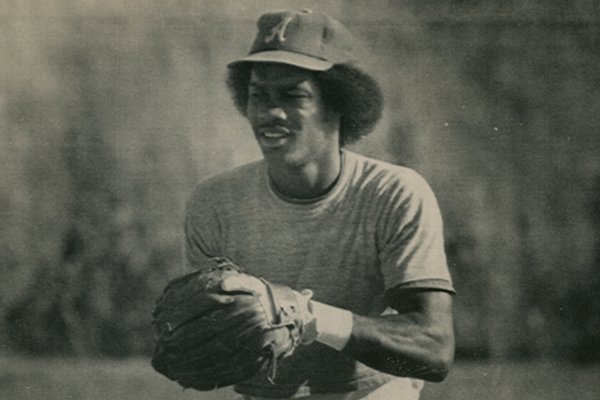 Arkansas second baseman Johnny Ray covers the base during a 1979 practice in Omaha, Neb.

FAYETTEVILLE — Forty-one years ago today, the University of Arkansas — a newbie at the College World Series — took on mighty No. 1 Texas in the winner’s bracket final at Rosenblatt Stadium in Omaha, Neb.

The Longhorns, already winners of three CWS titles by then, had lost their first game of the season to the Razorbacks 2-0 on March 2 in Fayetteville. Texas won that series by taking the next two games 3-2 and 1-0 at George Cole Field and rampaged through the Southwest Conference with a 22-2 record.

The Longhorns were 61-6 and a heavy favorite to topple the Razorbacks in their third postseason meeting during the 1979 season. They had also downed Arkansas 6-2 and 12-6 during the SWC Tournament in May at Austin, Texas.

“We knew we were playing pretty good at that particular time and we won a lot of games there [at the SWC Tournament],” said Johnny Ray, Arkansas’ second baseman. “Of course, when you’re playing Texas in Austin for the championship, it’s kind of tough.”

The last meeting of the season between the bitter rivals was in the neutral setting at Rosenblatt. And the Razorbacks were working with a little extra motivation.

During the College World Series, the Razorbacks and Longhorns were staying in the same hotel in downtown Omaha.

“I remember getting into an elevator at the hotel, and we were playing them either that night or the next day,” said Norm DeBriyn, who was Arkansas’ coach in 1970-2002. “I got into the elevator and I recognized some Texas players in there. They’re talking, and I looked.”

Razorback freshman Kevin McReynolds, who DeBriyn said “never said two words” was on the elevator and, to no one’s surprise, wasn’t talking.

“I didn’t say anything,” DeBriyn said. “I remember the Texas players talking about Arkansas. They didn’t recognize me or Kevin. They said something like, ‘Arkansas, if you get by [Marc] Brumble and get by Ronn Reynolds and Johnny Ray, we’ve got them beat.’

“Kevin McReynolds, I kind of lifted my eyes up and looked at him. I knew he heard the whole thing, and never said a word. We get off the elevator. I don’t think they could get him out the next night. I think he had a heck of a night.”

Indeed, McReynolds hit a solo home run in the third inning to bring Arkansas into a 1-1 tie with the Longhorns. Brumble hit a three-run double in the inning, then McReynolds doubled home two more runs as Arkansas broke the game open with a seven-run third en route to a 9-4 victory.

Brumble also made a handful of sterling defensive plays in left field, including climbing into the stands to grab a foul ball in the first inning and making a couple of running catches at the wall in the seventh.

“They beat us some during the season,” McReynolds recalled. “But when you get to that point, what happened prior to that doesn’t matter. It’s ‘mano a mano’ out there. That game trumped what had happened during the season.”

DeBriyn called on freshman right-hander Scott Tabor, who had pinched a nerve in his throwing shoulder while warming up during the Razorbacks’ 5-4 victory over Pepperdine in the CWS opener.

“I’ll never forget the wind blowing my hat off,” Tabor said. “I had a big afro then. The wind blew my hat off and I reached up to grab it, and I pinched my shoulder.”

An anti-inflammatory helped Tabor recover and take on the Longhorns.

“It’s always sweet to beat Texas,” said Tabor, who pitched into the fifth inning. “Then watching their attitude, because they’re Texas. They’re arrogant. Any time we could win against Texas, it was always great.”

The Longhorns outscored Arkansas 22-12 while winning four of five meetings prior to the College World Series that season.

Texas Coach Cliff Gustafson gave Keith Creel a surprise start, and the Razorbacks knocked him out in the big third inning.

Jeff Huddleston relieved for Tabor and worked the final 41/3 innings to pick up the victory for Arkansas.

“I don’t think it was any kind of a motivational game for us,” said Ray, who would hear different from Razorback fans. “Texas back then was one of the better college teams in the nation, and everybody wanted to beat them because of all the success that they had.

“Going into Omaha, we were confident we could beat anybody. Texas just happened to be on our schedule at that time, and we played well and beat them.”