State of the Hogs: Broyles, Arkansas were always special to Majors 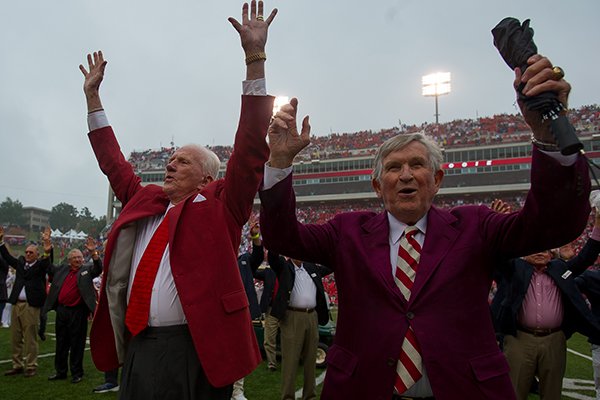 Johnny Majors (right) and Frank Broyles participate in a Hog Call prior to an Arkansas game against Alabama on Oct. 11, 2014, in Fayetteville. The men were on the field for a ceremony celebrating the 50th anniversary of the Razorbacks' 1964 national championship team. Majors was an assistant coach for Broyles for four seasons from 1964-67.

Johnny Majors was known as a great recruiter as a college football head coach at Iowa State, Pittsburgh and Tennessee.

Among the many All-Americans signed by Majors was Heisman Trophy winner Tony Dorsett at Pitt. Dorsett stared as the Panthers won the 1976 national championship.

I learned firsthand about the persistence and doggedness of Majors in July 2014 and how he probably recruited Dorsett. He wore me out to provide information for a column on Frank Broyles.

After a 30-minute interview with Majors at a charity golf event in Bryant, he chased me for three days in hopes of adding new tidbits about his mentor. Majors worked four seasons for Broyles, including in 1964 as secondary coach when Arkansas won the national championship.

Majors died this week at 85, a Hall of Famer as both a player and coach in a career that started as a Single-Wing tailback at Tennessee and ended after the Vols had won three SEC football titles.

Majors spent the better part of a week in Arkansas in July 2014, first to play golf in a charity event at Bryant, then speak at a Little Rock luncheon and finally to toast Broyles in a huge Rogers dinner.

It was after that golf outing that Majors begin to chase me. I could only wonder how doggedly the former coach had chased Dorsett.

I did not give Majors my phone number. But the then 79-year-old decided there was more Broyles information that was important.

My phone rang two days later from a Knoxville number and the voice message began, “Clay, I got your number from Harold Horton. I have more to tell you about Frank.”

Then he filled the allowed time for a voice message. When the time expired, there would just be a click.

Then, another call would come in, and the message would begin, “This is Johnny, I have more to say on Frank.”

That happened five times before I came in from mowing the lawn and could return the call to Majors, but only after listening to the messages with great tidbits of time spent coaching with Broyles.

“I love him,” Majors said when I asked about the ferocious way he ran me down to provide more detail of his time with Broyles.

To be honest, what I’d gotten over lunch in Bryant was perfect. But there was great information in the later phone visits, too. Majors called later in the week with more, then more when we shook hands again after the Rogers dinner. That was probably eight visits in the course of six days and no information was repeated.

“I just want to make sure that your readers understand exactly the greatness of Frank Broyles and what he meant to so many young assistant coaches who ended up becoming head coaches,” Majors said. “He trained us. It was finishing school to become a head coach. That is what Frank was doing at Arkansas all of those years.”

Majors had some of that, too. Perhaps it was learned from Broyles, but there was sure a way of making your point. I knew Majors loved Broyles.

At the dinner in Rogers before a crowd estimated at 1,000, Majors turned to Broyles in his closing remarks to offer, “to coach again when” Broyles decides to return to coaching.

Broyles was three years short of his passing then and not going to coach again, but Majors said he was all in if Broyles did. He said he knew it would be lucrative. It sure was the first time. He called his four years at Arkansas “the happiest” of his coaching career.

He said Broyles was the first coach to arrange for courtesy cars for assistants. He said his salary went from $11,000 to $14,000 after the '64 national title, plus the top four assistants on staff got an additional $2,000 to do a radio show, and that they also got $1,000 university bonus, $1,000 Razorback Foundation bonus and a housing allowance of $800 from the state. He said they were the best-paid assistants in the country.

Majors said he learned much from Broyles, including both tactical expertise and technical coaching points. Majors said he played tailback at Tennessee (where he finished second in the Heisman Trophy race in 1956) and was not equipped as either a secondary coach or an offensive backfield coach when he arrived in Fayetteville.

“I coached corners when I first got to Arkansas and Coach Broyles taught me the proper technique,” Majors said. “He knew it and showed me the exact way to coach them.

“Then, when he moved me over to the offensive backfield in ‘67, I was coaching something I hadn’t hardly done since high school, how to make a handoff or take a snap. So Coach Broyles taught me proper technique for all of that. He demonstrated how to take a snap before we began spring training that season.

“His ability to coach technique was outstanding. He was as good as anyone in the specifics of technique. I learned so much from Coach Broyles.”

Majors inherited a great secondary when he arrived at Arkansas in the spring of 1964. He had Ken Hatfield and Billy Gray as the halfbacks (cornerbacks), Charlie Daniel as monster (strong safety) and Harry Jones at free safety. Actually, some of those were converted from offense, most notably Gray and Jones, quarterbacks the previous season.

Things ended smoothly that year with all those shutouts, but nothing was easy to start the season when the Hogs slipped by Oklahoma State, 14-10. Then there was a 31-22 comeback victory in Week 2 against Tulsa.

“The first year at Arkansas, I remember vividly,” Majors said. “We had somewhat of a struggle in Little Rock with Oklahoma State and then against Tulsa. The Oklahoma State game was close. And we beat Tulsa, 31-22, after trailing, 14-0.

“I got introduced to the passing game very quickly as a defensive backfield coach. Tulsa had Jerry Rhome and Howard Twilley. They were 20-for-28 that day, but we won the game because we kept them out of the end zone most of the time.”

The Hogs figured it out and eventually got a great pass rush from the likes of tackles Loyd Phillips and Jim Williams, ends Bobby Roper and Jim Finch, and nose guard Jimmy Johnson.

“I did some shaking and was quite nervous when I was introduced to the Southwest Conference passing game,” Majors said. “But we matured every week and that may be the greatest disciplined team of all time.

“I’m pretty sure that that team still holds the record for fewest turnovers and fewest fumbles. It was phenomenal. When you don’t turn the ball over – no fumbles or interceptions on offense – you are going to win.”

The Hogs had 14 total turnovers, just six lost fumbles. Eight of those turnovers came in the first three games. There were almost none in that streak of shutouts to end the season.

“We shut out the last five opponents,” Majors said. “Harry Jones touched it twice as the safety man and returned two interceptions for touchdowns. And we led the nation in punt returns.

“We not only didn’t beat ourselves on offense — with discipline on offense, which comes from Coach Broyles and assistant coaches — but on defense. To shut out the last five and to score on defense on interceptions and punt returns, it’s one of the greatest teams in American football as far as not beating yourself and having a great defense.”

The Broyles way was to be innovative. Seldom did Broyles stand pat. He was always looking for an edge, former assistant Ken Turner said.

“If someone was doing something good, Coach Broyles sent someone in the spring to talk to them,” Turner said. “He sent me to North Carolina to check their kicking game and he sent me to Alabama about receivers. He did that with all of our coaches. We’d go talk business with them and come back before spring practice.

“He did let you coach, but he knew more football than any head coach I ever worked for. He’d hire you to coach, but he would say, ‘Well, we might ought to do this.’”

If there was a lesson on persistence in that training, Majors learned it.