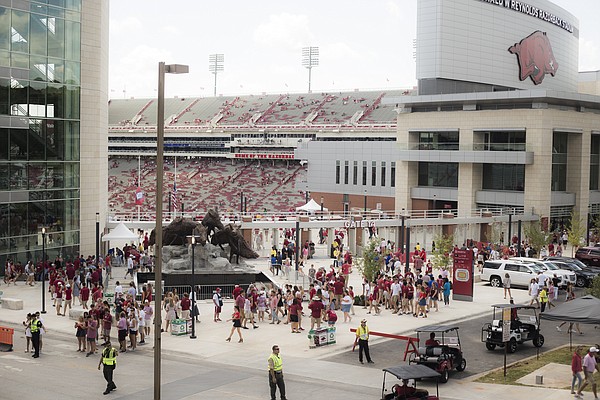 Attendees crowd the north endzone entrance during a tailgate before a Saturday, September 1, 2018 at Razorback Stadium in Fayetteville.

FAYETTEVILLE — Big donations of $1 million or more accounted for 47% of all contributions in fiscal 2019 to the nonprofit organization supporting athletics at the University of Arkansas, Fayetteville.

The Razorback Foundation’s $31.2 million fundraising total in the 12-month period that ended June 30, 2019 — up about $3 million from the previous year — was reached as it sought support for three UA athletics construction projects expected to cost about $47 million. The foundation reports its contributions annually to the Internal Revenue Service and filed its return last month.

Wanless said available data shows wide variations from school to school when it comes to giving. But now the coronavirus pandemic is causing worry nationally about donations in support of college athletics.

“I think everyone is worried. There probably isn’t an athletic development director that doesn’t have some concern right now,” Wanless said.

Gifts to the Razorback Foundation — either in the form of tax deductible giving or made to secure tickets — play a major role in funding UA athletics.

Giving for the Razorbacks + Enlarge

Giving in support of Razorback athletics m ade up about 16% of annual revenue used to cover operating costs in fiscal 2019, according to a separate report submitted to the NCAA. The report listed about $137.5 million in operating revenue for the year and $22.6 million in contributions actually used during the year, so not including pledges.

The foundation also played a highly public role in negotiations over buyout terms with former football head coach Bret Bielema. The recent IRS filing lists a $4,268,333 “guaranty payment” in calendar year 2018 to Bielema, who was fired in November 2017 immediately after the team’s final game of the season.

In January 2018, the foundation announced an agreement on buyout terms with Bielema. The foundation agreed to pay up to $11.9 million over three years, with the payout to be reduced based on Bielema’s future employment.

However, the foundation, in a statement to the Democrat-Gazette, said that “based upon inquiry, investigation and consultation with legal counsel, the Foundation concluded that it has no further payment obligation to Bret Bielema.”

A guaranty adjustment of $7,072,771 listed in the most recent 990 return is “consistent with this determination,” according to the statement from Meredith Pettigrew, the foundation’s director of strategic communications and stewardship.

Tom Mars, an attorney with offices in Rogers and Atlanta known for his role in high-profile cases related to college athletics, said he’s one of five attorneys assisting Bielema “with this matter.” Mars declined to comment when told of the foundation’s statement.

Wanless, whose research includes studying athletic giving, said an economy hurt by the pandemic generally affects all types of philanthropy.

Athletic giving specifically can involve an emotional tie between a donor and the athletic program, Wanless said, as well as those gifts made to procure tickets and parking, making it a sort of “hybrid” compared with other types of philanthropy.

Looking back at giving during and after the most recent recession can give some insights, Wanless said, but the pandemic also has created unique circumstances for college athletics.

With the outbreak beginning to cause havoc in the U.S. in early March, “many of the annual fund donors will have renewed by then,” Wanless said.

But the pandemic also is affecting athletics directly, Wan-less noted.

In early 2019, the Razorback Foundation created a new gift society for major donors of $25,000 or more. The fiscal year included some public announcements of major gifts in support of facilities projects.

In addition to gifts, a $24.9 million bond issue that’s to be repaid over 15 years is helping finance the athletic construction projects.

The biggest project is an approximately $27 million baseball clubhouse and training center set to open in the summer of 2021.

The J.B. and Johnelle Hunt Family Baseball Development Center is being built in part through fundraising that includes an announced $5 million pledge from the Hunt family known for establishing J.B. Hunt Transport Services Inc., which is based in Lowell.

The pledge was announced in November, however, outside the 12-month period ending June 30 covered by the foundation’s most recent tax return.

The Razorback Foundation, in a statement, said the project “has generated more than 120 gifts during the current campaign from numerous Razorback fans.”

Other construction projects include a track-and-field performance center, estimated by the university in June of last year to cost about $15 million. Documents from a January 2019 University of Arkansas System trustees meeting state the foundation had a $3 million gift agreement to support the Frank O’Mara Track & Field High Performance Center.

In December 2018, the university announced a $6 million gift from the family of the founder of Tyson Foods Inc.to support a project estimated at $15 million-$20 million to renovate and expand the indoor Randal Tyson Track Center, a project described by UA in June 2019 as being done in phases, with the first phase costing about $5 million.

The foundation’s 990 return lists total contributions in the form’s Part VIII. Major donations are listed on what’s known as “Schedule B,” or Schedule of Contributors.

“Generally by looking at the total of contributors listed on Schedule B and comparing it to total contributions, gifts, grants and other similar amounts from Form 990, Part VIII, line 1h, that will provide the percentage of large contributors,” said April Wallace, lead manager for tax practice and ethics with the American Institute of CPAs, a member association for accountants.

The foundation’s most recent IRS return lists five donations in amounts of $1 million or greater, the largest in the amount of $5 million. The identities of the big donors are not made public on the IRS form.

Federal tax law changed in 2018 to eliminate an 80% charitable deduction for contributions made in exchange for tickets to collegiate athletic events.

The foundation, in a statement from Pettigrew, said “individual charitable donation decisions often involve a number of considerations including, among others, tax deductibility.”

The statement continued: “Without question, we believe that all athletic foundations and public tax-exempt entities would benefit by restoring the 80% charitable deduction in Section 170(l) of the Internal Revenue Code.”