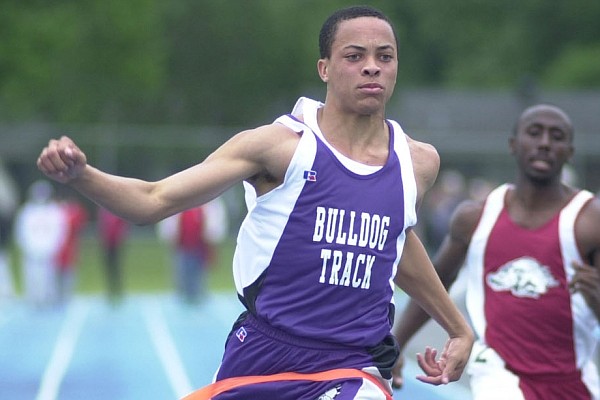 Wallace Spearmon, center, shown winning his heat in the 100 meters at the state track meet his senior year, was a three-sport standout at Fayetteville High School, but went on to be a two-time NCAA champion in the 200 meters and an Olympian.

Jim Yurwitz recalls how he watched Wallace Spearmon win the boys 100-meter dash during the 2003 Class AAAAA state track meet at Hot Springs, when the Fayetteville sprinter appeared to be out of the race moments after it had started.

“I was near the starting line, on the concrete bleachers when it happened,” said Yurwitz, who was Rogers’ track coach at the time. “The gun went off, and I don’t think his block slipped. He just stumbled out of the blocks, and he put his hands on the track.

“When he came back up and got under control, he was a good 5 to 7 meters behind the entire field. He then caught them all and beat them by a few meters. It was pretty impressive — one of the most impressive races I’ve seen.”

Spearmon did a lot of work on the track, much like many Fayetteville athletes, and it helped him a third-place finish in the 2003 high school decathlon. But it was his sprinting that led him to Arkansas and eventually to the Olympic Games.

“He was a sprinter, but he could do everything — especially at the high school level,” Yurwitz said. “I would be willing to bet that if he knew how to train in high school like he learned how to train in college, he could have been one of the best sprinters this state has ever seen. And there have been some really good ones in Arkansas.”

Northwest Arkansas boys track athletes have represented themselves well when it comes to distance races, and the Arkansas Activities Association’s list of state records bears that out.

But in the long run, nobody probably did it better than Fayetteville standout Camren Fischer, who dominated many meets from 2017-19 in whatever race he ran that day. But instead of going for records, Fischer was more interested in compiling points to the Bulldogs’ team total.

“He never really worried about records,” Fayetteville coach Drew Yoakum said. “He worried about his teammates and how well they were going to do and what he could do to help the team.

Fischer, now at Princeton, was brought up as a freshman and finished third in the 1,600 and second in the 3,200 during the Class 7A state meet in Conway. He won the 1,600 and the 3,200 the next three years, then made it a Triple Crown in distance races when he won the 800 in the 2018 Class 7A meet at Bryant and again at last year’s 6A state meet at Lake Hamilton.

There is no telling what Fischer could do if he focused on just one race. In his first time to run the 800 and against a slower field of runners, Fischer ran it in 1:55.07 to set the 7A-West (now the 6A-West) Conference record, and he capped his Triple Crown last year when he set the 6A state record in the 3,200 with a time of 9:23.58.

“He was one you didn’t have to worry about getting somebody to pace him,” Yoakum said. “He was self-motivated and knew what he had to go out and do. His mindset was it was full-throttle, no matter what it was.

Hop, skip, and a record jump

Brandon Workman’s best jump of his high school career was one that didn’t make it to the record books.

The Rogers High standout competed in the 2014 7A-West Conference meet at Springdale Har-Ber when he set the league record at 48-3, but that wasn’t his best jump. Workman actually won the event with a leap of 49-3.25 that day, but the wind behind his back was too strong to allow it to be a legal jump.

“The thing I remember the most about that day is watching Brandon triple jump,” Yurwitz said. “He put one out there about 47 or 48 feet, and he missed the board by about 2 feet. We adjusted his steps a little bit, and he came down and fouled by about an inch and a half. He had the best jump he’s ever had, and it was well out above 50 feet.

“We had them measure it, and they did a real quick measure. It wasn’t exact, but it was well over 50 feet.”

Workman’s last jump that day was the 48-3 that now stands as the conference meet record. He then jumped 48-7 at the Class 7A state meet the following week in Cabot and broke the previous 7A state mark of 47-11 by Donavan Loring of Little Rock Parkview in 2006 and the overall record of 48-0 by Rivercrest’s Clinton Whitted in 2010.

Avid followers of Arkansas high school track will agree that the overall boys state shot put record is probably one of the most untouchable marks. Paul White of Russellville set the record in 1974 with his toss of 65 feet, 10.75 inches, and not many have made a serious threat to it since that time.

Bentonville’s Bryant Parlin gave it his best shot last year and fell short — but not by much. Parlin won the Class 6A state championship at Lake Hamilton with his personal-best toss of 64-9 and beat his closest competitor by almost 13 feet.

“Bryant had that in his mind,” Tigers coach Mike Power said. “Not so much the records, but being the best athlete he can be. He improved his diet a lot better. He put on muscle and lost a little bit of fat, and he was focused on being the best senior he could be. If records happened, so be it.

“He was trying to improve with each meet, and it came to a point where the record became a conversation.”

Parlin, who threw the shot 52-3 to win the 2018 Class 7A state meet at Bryant, began the outdoor season with a toss of 59-9 at the Springdale Invitational, and the numbers continued to rise weekly. Before his big state-meet outing, his personal-best came in Russellville — White’s hometown — when he threw 63-9 during the Cyclone Relays.

But it wasn’t the only record Parlin, who is now competing at Oklahoma, was chasing.

He was within striking distance of the Class 6A state discus record of 185-0 set by Cabot’s Jesse Williams of Cabot in 2005 and the overall mark of 187-11 set by Crossett’s Bobby McDaniels in 1985. He passed them both when he threw 189-10.75 at the Kansas Relays, but it isn’t recognized as a record because it didn’t happen in a state meet or the Meet of Champs.

“He went in there with some great athletes, and he rose to the occasion,” Power said. “That’s our school record, and I think it’s going to stay for a while. Once he put it out there, everyone in that crowd behind the discus ring knew it was going to be big.”

Records in the making

It could be just a matter of time before Fayetteville’s Isaiah Sategna places his name in the state record books. The only question is when it will take place and will it be in the 300 hurdles, the long jump or both.

The bad news: Sategna lost his chance to do it this year when the coronavirus pandemic wiped out spring sports. The good news: he still has two more years to accomplish those feats.

“Isaiah is just an unbelievable athlete,” Yoakum said. “As dominant as Camren was in distance, Isaiah is in hurdles and jumps. His ability is whatever he wants it to be. He can jump out there and push himself, and we’ve done everything with him from the 400 on down.

“His jumping ability in the long jump and the high jump is incredible, as well as the sprints and the hurdles. He’s just one of those athletes we are blessed to have, and he gives it his all. And he’s top-notch at it.”

As a freshman, Sategna exploded on the scene in a hurry. He won three events and accounted for 54 of the Bulldogs’ 158.5 points they scored to win the Class 6A state meet.

“He would have done some great things this year,” Yoakum said. “But as he gets stronger and more mature and understands what kind of ability he has, he’s only going to improve. The sky is the limit for him.

“It’s exciting to have two more years from him and hopefully, beyond us, something the state can enjoy. Those kind of athletes don’t come around too often.”