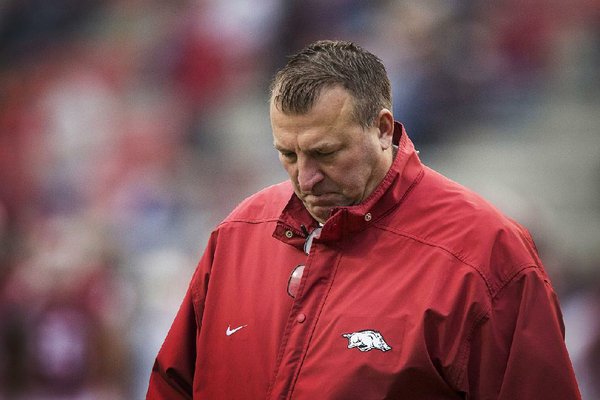 FAYETTEVILLE — Attorneys for former University of Arkansas football coach Bret Bielema filed a lawsuit Friday against the Razorback Foundation, arguing the foundation broke the terms of its buyout agreement with Bielema.

The lawsuit — which demands $7.025 million in compensatory damages, as well as punitive damages, attorney fees, court costs and a jury trial — was filed in federal court in the Western District of Arkansas. The resolution of the legal action largely could revolve around the portion of Bielema’s buyout agreement that called for him to actively seek employment or “mitigation” after his firing.

The filing of the lawsuit was first reported by Variety, whose sister outlet Sportico obtained the court records.

The Razorback Foundation, the fundraising arm for UA athletics, is listed as the defendant in the lawsuit because it was the third-party guarantor for Bielema’s contract with the UA.

The lawsuit states the foundation is in breach of its promise to pay Bielema’s final buyout agreement, in breach of a non-disparagement agreement between the sides, and caused the publication of false information about Bielema.

According to his negotiated buyout agreement with the Razorback Foundation, Bielema was to be owed up to $11.935 million through the end of his employment agreement with UA that ran through December 2020.

The foundation stopped making payments to Bielema after January 2019, alleging material breach of contract, according to the lawsuit.

The suit states the foundation erroneously alleged Bielema made no effort to obtain employment comparable to his old job at Arkansas, while the foundation accused Bielema of intentionally being paid less than $150,000 by the New England Patriots in 2018.

The sides in the dispute staked out firm positions Friday.

Marshall Ney of the law firm Friday, Eldredge & Clark in Rogers, which is representing the Razorback Foundation, issued a statement on Friday afternoon.

“What I can share at this point before digesting the entire document is that the Foundation previously demanded that Bret Bielema return the $4,555,833.29 that had been paid to him prior to the Foundation’s discovery of his multiple material breaches of the agreement. It appears that Bielema filed suit in order to avoid being sued.”

Bielema has a deep legal team involved in the lawsuit, including lead attorney Tom Mars, who has offices in Rogers and Atlanta. Mars is well-known for representing former Arkansas and Ole Miss coach Houston Nutt in his legal issues with Ole Miss. He’s also know for his largely successful work with athletes on NCAA eligibility matters.

Bielema’s attorneys argued in their 64-page lawsuit that the foundation’s “concern about its financial health … provided a strong incentive to breach the terms of the Final Buyout Agreement on the premise that Coach Bielema would have no appetite for litigation and would eventually decide to settle for pennies on the dollar.”

The lawsuit claims Bielema’s request for “an award of compensatory and punitive damages, arises from the Foundation’s calculated, bad faith efforts to renege on its contractual obligations to Coach Bielema without cause.”

Bielema was fired Nov. 24, 2017, by interim athletic director Julie Cromer Peoples, moments after the Razorbacks completed a 4-8 season in his fifth year as head coach. He compiled a 29-34 record at Arkansas, including an 11-29 mark in SEC games. Prior to his five-year stint at Arkansas, Bielema was 68-24 in seven seasons at Wisconsin with three Big Ten championships.

His attorneys argue Bielema followed established practices for recently fired head coaches. According to the lawsuit, Bielema was paid a $25,000 independent-contractor fee in 2018 before being hired as a special assistant to New England Coach Bill Belichick, a job that paid $100,000 between July 2018 and January 2019.

In their filing, Bielema’s attorneys state either Bielema or someone acting on his behalf made “serious efforts” to obtain another college head coaching position and inquired about vacant jobs at Nebraska, Arizona State and Arizona in the months after his firing at Arkansas. It states no athletic directors or search firms contacted Bielema about a vacant coaching position in 2018.

The suit states Bielema negotiated contracts with the Patriots and New York Giants that allow him to take a college head coaching job without penalty.

Bielema was promoted to defensive line coach in New England in 2019 at a salary of $250,000, according to the suit, and he left for an assistant coaching job with the Giants in January at an annual salary of $400,000.

“Throughout his tenure with the New England Patriots and the New York Giants, Coach Bielema exercised his best efforts to be considered as a candidate and be hired as the head football coach at a DI school,” the suit states.

The “demand letter” from the foundation informing Bielema he would no longer be paid his severance was sent by outside legal counsel and “made it appear that the Foundation’s leadership had come completely unhinged,” the lawsuit states.

The suit states the foundation demanded Bielema pay back all of the $4,234,999.96 in previously disbursed buyout payments within 15 days of the January 2019 letter, and the letter “blindsided” Bielema.

After beating Texas 31-7 in the Texas Bowl to conclude a 7-6 season in 2014, Bielema signed an amended contract on Feb. 6, 2015. The new deal increased his salary and included lucrative buyout terms, calling for Bielema to be paid $15.4 million if he was terminated before Dec. 31, 2017.

According to the lawsuit, Razorback Foundation Executive Director Scott Varady had a phone conversation with Bielema’s agent, Neil Cornrich, not long after the firing in which, Bielema’s attorneys claim, Varady said he did not believe the foundation owed Bielema $15.4 million.

The lawsuit also claims Varady said in that phone call the “spirit” of the buyout agreements in Bielema’s contracts in 2012 and 2015 called for the use of a “buyout-reducing formula." In 2017, the Arkansas Democrat-Gazette reported the formula would reduce Bielema’s buyout amount to approximately $5.9 million at the end of the season.

Bielema’s attorneys point out that a buyout-reducing formula that was part of Bielema’s initial employment agreement with the university was not included in 2012 and 2015 buyout agreements with the foundation.

“It has yet to be determined whether the buyout-reducing formula was omitted from the 2012 and 2015 Buyout Agreements intentionally or the result of negligence by whoever drafted and approved those two contracts on behalf of the foundation,” the lawsuit states.

Varady declined comment for this story and referenced the statement from Ney.

Bielema’s lawyers also contend the foundation declined several written requests from Bielema’s counsel to meet with the foundation’s outside legal counsel to “share information and discuss the disputed facts,” and that the foundation agreed to meet only on the condition that Bielema first make a “serious” settlement offer.

The lawsuit also states that on Jan. 31, 2020, one year after Bielema received the “demand letter,” Bielema’s legal representatives requested the foundation participate in the mandatory dispute resolution meeting required by the buyout agreement. The lawsuit claims the foundation refused to meet or engage in fact-sharing with Bielema’s legal team and did not budge from its position to “make a serious settlement offer first, then we’ll talk,” and the fact-sharing meeting did not occur.

Bielema’s attorneys allege that current Athletic Director Hunter Yurachek appears to be the “driving force” behind the foundation’s decision to stop making payments to Bielema, based on his criticism of huge buyouts when he was hired.

Bielema’s attorneys also claim the foundation leaked false information to the media that portrayed Bielema in a false, negative light and interfered with his ability to obtain a Division I head coaching position.

In that claim, Bielema’s attorneys pointed out similar wording in what they termed the “demand letter” received from the foundation’s outside counsel and a Nov. 6, 2019, column in the Arkansas Democrat-Gazette by sports editor Wally Hall that had bullet points listing the reasons the foundation felt Bielema had breached the agreement.

Bielema’s attorneys summed up their claims for relief in three counts:

• The foundation breached promises to pay Bielema’s severance in the final buyout agreement.

• The foundation breached the non-disparagement promise included in the final buyout agreement.

• The foundation made a “false light invasion of privacy” that caused harm to Bielema’s reputation and his ability to be hired as a head coach.