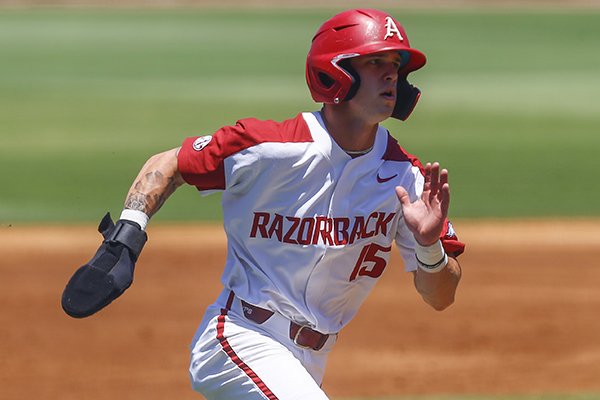 Arkansas' Casey Martin runs home to score on a RBI single from Arkansas' Dominic Fletcher during the first inning of a Southeastern Conference tournament game against Ole Miss, Wednesday, May 22, 2019, in Hoover, Ala. (AP Photo/Butch Dill)

FAYETTEVILLE — After the Philadelphia Phillies picked Casey Martin in the third round of the Major League Baseball Draft on Thursday, he heard from the team’s biggest star.

Phillies outfielder Bryce Harper — a six-time All-Star, the 2012 National League Rookie of the Year and the 2015 NL Most Valuable Player — reached out to Martin on FaceTime.

“One of the probably biggest moments of my life, honestly,” Martin said Friday during a Zoom call with media members. “I’ve grown up watching Bryce Harper play. He’s a stud. He plays the game hard, and never would I have dreamed I’d be on the other end of the phone with him.

“But, man, here we are. It was definitely cool and exciting. It’s something I’ll remember for the rest of my life.”

Martin, a Lonoke native and a starting infielder for the University of Arkansas the past three seasons, said he doesn’t remember all of his conversation with Harper.

“Man, I kind of blacked out in the middle of it to be honest,” Martin said. “It was just so unreal. He just told me congrats and said he’s ready for me to come down and get to work. He said, ‘Man, I told our guy that we had to draft you back in February.’

“He said, ‘I’ve been watching you. You’re a stud. But I told our guy we’ve got to have you.’ Sure enough, I got drafted by the Phillies.”

Martin, who played third base as a freshman and shortstop as a sophomore and junior, helped the Razorbacks advance to the College World Series in 2018 and 2019.

“I guess you could say my takeaway is just because I’m a college baseball player, these older guys actually watch,” Martin said of Harper’s knowledge of his game. “They watch, they pay attention, which is awesome to see.”

Martin was drafted 87th overall after being ranked as a top-35 prospect by Baseball America and mlb.com.

“Casey fell a little bit as far as the number of where he was picked,” Arkansas Coach Dave Van Horn said. “I knew the Phillies really, really liked him, and that was only their second pick.

“When he fell to them, they were really excited about that. He’s still going to get paid really nicely and I think, bottom line, he’s with an organization that really wanted him. He’s happy about it, so I’m happy for him.”

Van Horn said the Phillies have been interested in Martin since he was in high school.

“I know a couple of their scouts, and we’ve talked a few times over the last year or two about Casey,” Van Horn said. “They had the 15th pick of the first round [and took high school pitcher Mick Abel], and they didn’t pick again until [87th]. They didn’t feel like Casey would be there, but there he was and they got him.”

The slot value for the 87th pick’s signing bonus is $689,000, but that doesn’t mean Martin received that from the Phillies.

“I wouldn’t say how much,” Martin said of his signing bonus. “But I think I got a fair amount for where I was picked and for my value.”

Martin had to wait through all of Wednesday night’s first round and then for several hours Thursday night before hearing his name called.

“It was a stressful day, but a very exciting moment, I can tell you,” Martin said. “A moment I had worked for my whole life. It’s been a crazy ride up until now, and I’m just really grateful to be in the situation I’m in, whether going first, second, third, fourth, fifth round. I don’t care.

“I’m just grateful to have an opportunity to continue my baseball career and move on to the next level. I think it’s time.”

Along with those glowing numbers, Martin had 165 career strikeouts.

“Everybody says swings and misses,” Martin said of what negatively affected his draft stock. “That’s what all the scouts say. So we just have to continue to work on that.”

Martin said getting more at-bats will help him cut down on strikeouts.

“In college, you get maybe 200-something at-bats and in the professional leagues, it’s over 500.” he said. “I have such a motor that it’s like when it gets going, I’ve got to slow down. I think once I get more repetitions, that motor will slow down just naturally. I just think I need to get as many at-bats as I can.”

Martin said the Phillies haven’t told him what position they want him to play to start his professional career, or when that might begin with all of baseball still shut down by the coronavirus pandemic.

Playing second base, Martin said, wouldn’t be an issue for him.

“When I came [to Arkansas], they actually put me behind Carson Shaddy at second before I moved over to third,” Martin said. “So I don’t see why not [with the Phillies]. Just another position you could put in your utility bag, I guess you could say.”

Playing the outfield also wouldn’t be a problem, Martin said.

“Before I made the transition to shortstop and second base when I was 14 or 15, I grew up playing catcher and outfield,” he said. “So it’s just another position I can play, which helps me out in the long run, I think.”

A Philadelphia writer who covers the Phillies asked Martin to describe Lonoke.

“Well, I can tell you right now, I’m sitting here looking at five or six big ol’ rice bins,” Martin said. “We’re a big farming town. It’s all fields, it’s all corn, it’s all rice, it’s all beans. It’s nothing but beat-up old roads and jacked-up old trucks and farm land. That’s really all it is.”

“It’s like a small-town hick town,” Martin told the Philadelphia writer. “Whatever you’re probably picturing is probably exactly what it looks like. Got a bunch of fish farms here, too. Just a bunch of farm land, man, a bunch of trees. Not really much to do here besides hunt and ride around.

“Definitely wouldn’t want to live anywhere else, I can tell you that.”