Curtis Washington tries switch hitting as he ponders what's next 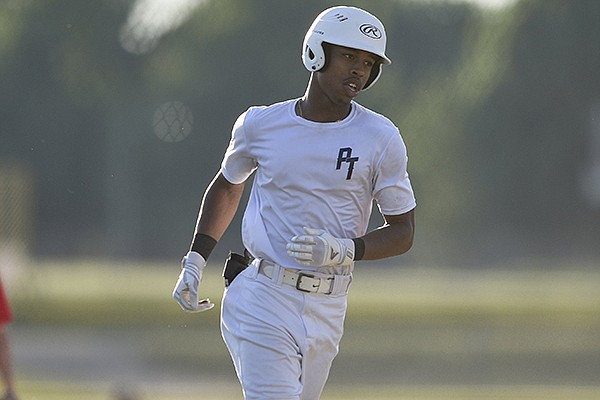 Curtis Washington runs the bases after hitting a home run during a game in the Perfect Timing League on Monday, June 15, 2020, at Tyson Sports Complex in Springdale.

SPRINGDALE — Curtis Washington Jr. said the coronavirus pandemic gave him the opportunity to work on his hitting from the left side of the plate.

It paid big dividends for the University of Arkansas outfielder Monday evening as he corked a game-tying, two-run home run off the metal wall beyond the center-field fence at Tyson Park.

“I had a lot of time off, so I worked on my left-handed swing,” Washington said after hitting home runs from both sides of the plate and rallying Perfect Timing White to a 5-4 victory over Perfect Timing Red. “I came up here in the summer league to work on my switch-hitting so I could up my game.

Washington always wanted to be a switch-hitter like his favorite player, former Atlanta Braves slugger Chipper Jones, and he would work on batting both ways while at the park with his father. However, he hadn’t started doing it during a game until recently.

The way he swung the wood Monday gave no indication of a player who was previously 1 for 16 during the first two weeks of the Perfect Timing Collegiate League. He batted right-handed off Red left-handed pitcher Jordan Wicks and lined out to right to start the game, but he turned on a Wicks pitch and belted it for a solo home run in the fourth inning, cutting Red’s lead to a 3-2 margin.

The next time Washington batted, he turned to the left side as he faced Red right-hander Grant Jones during the top of the sixth. He already had two strikes when he turned on a pitch and homered for a 4-4 tie.

“He had a good game at the plate,” Red coach Phil Cebuhar said. “It’s kinda cool to see a guy hit a home run from both sides of the plate, and he was able to do that.”

Defensively, Washington is a utility player and can play both the infield or outfield. He would rather prefer to be in center field or at shortstop, but he played third base in Monday’s game. He put the tag on a pair of Red runners for outs, one on a stolen base attempt and the other on a throw from the outfield.

“I’ve played everywhere my whole life,” Washington said. “I feel like that has helped me. My athleticism, I love to use it and show it off.”

Washington, who came to Arkansas from West Memphis, said he will play in the area summer league as he tries to figure out his next move. He played in 30 games for the Razorbacks as a freshman, including six starts in the outfield, but he played in just six games and had five at-bats this spring before the coronavirus pandemic suddenly ended the season.

Washington, who has entered the NCAA transfer portal, said he would prefer to stay at Arkansas, but he also has visited some other programs, although he declined to mention what schools. He said he would make his decision later this month or in early July.

“I don’t know if I’m leaving or not yet,” Washington said. “So I’m going to stick around here for now. I plan on staying here, but if any other offers come up, I might take it.