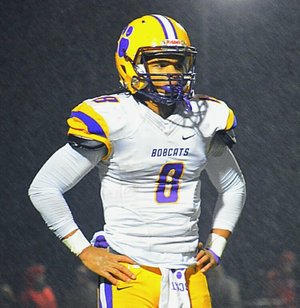 Chris Harris is an athlete in the class of 2020. (Photo courtesy of Jona Lewis)

Arkansas preferred walk-on Chris Harris is doing everything possible to be ready for when he reports to Fayetteville later this summer.

“I’ve been working out about 3-4 times a day,” Harris said. “I try and run a mile every day, do arms and legs. They tell me they're probably looking at me at slot. I’ve been catching and doing a lot of DB drills just in case.

“I push myself to be uncomfortable.”

He’s working with former Razorback and NFL tight end Chris Gragg and former Pittsburgh tight end Will Gragg, who began his college career at Arkansas. The Graggs' father, Kelvin, is the superintendent of the Dumas School District.

Harris was named to the Arkansas Democrat-Gazette All-Arkansas Preps second team as a junior.

He only played in four games as a senior after Coach Max Pennington returned from a 100-day suspension after sending a parent a racist text. According to a report in the Arkansas Democrat-Gazette, he later claimed the word he meant to send was 'beggars.'

Harris and several other players left the team when Pennington returned.

“That’s the only position they’ve seen me play,” Harris said. “I can catch really well. I’m not going to drop any passes. Working out with Will Gragg over the last couple of months and training, too, I’m good at running routes now.

"I’ve gotten good at getting my feet under me. I learned more of the game by being with him.”

One of the best dual-sport athletes in the state, he also was a standout in basketball. Harris has impressive strength in the weight room with a 300-pound bench press, 475-pound squat and a 255-pound power clean.

Harris said he downplayed his desire to be a Razorback during the recruiting process, but there’s no doubt he wanted to be in Fayetteville.

“Deep down in my heart, I always wanted to play, whether it was basketball or football at Arkansas,” said Harris, who has a 3.6 grade point average. “I love the school. I had other options, but it was a no-brainer that my heart wanted to go to Arkansas.

"I get to play a sport I love for my home state.”