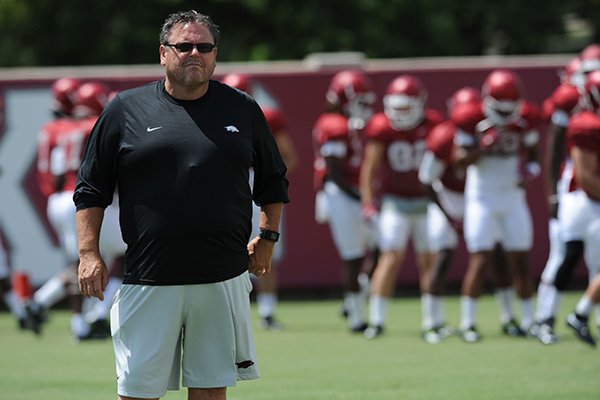 FAYETTEVILLE — Arkansas football players will be allowed to return to the field for modified practices beginning July 24.

The NCAA Division I Council on Wednesday voted to accept proposed guidelines for a six-week preseason period. The changes are intended to make up for practice time that was lost in the spring due to the covid-19 outbreak.

Under the amended preseason model, players will be eligible to participate in up to six hours of walk-throughs that include the use of a football between July 24 and Aug. 6.

Beginning July 24, players can participate in up to 20 hours of football activities, including up to eight hours of weight training and conditioning, up to six hours of walk-throughs, and up to six hours of team meetings and film review. Players would be required to have two days off each week during that time.

“When all of this started happening, I got on the phone with the NFL folks because my feeling was, because of spring ball and all of those things, I felt like we needed an OTA situation where we could at least go out," Pittman said June 3. "You talk about injuries, a big part of injuries is not knowing what you’re doing, going the wrong direction, not fitting the right gap. There’s conditioning, there’s strength, then there’s knowing what you’re doing. So, I did reach out to several NFL teams and expressed that to the SEC office, what my feelings were.

"It would be a non-physical type of situation and all of those things, but we need terminology on the field, we need technique on the field, we need all of those things that we didn’t have the opportunity to get in spring ball. We need to be able to do it, and it doesn’t have to be a tackle situation or anything like that. We’re just trying to learn."

The Razorbacks did not conduct any spring practices this year. The SEC suspended team activities three days before the practices were set to begin in March.

Traditional preseason practice is scheduled to begin Aug. 7 at Arkansas, 29 days before the Razorbacks' scheduled season opener against Nevada on Sept. 5 in Fayetteville.

Football players returned to campus for voluntary group workouts last Monday and have been able to participate in virtual meetings with coaches since April.

Beginning July 13, players will be able to participate in up to eight hours of weight training, conditioning and film review through July 23. Film review must be capped at two hours per week during that time.

“The Football Oversight Committee worked hard to create a model that balances the proper precautions due to the covid-19 pandemic with the need for an acclimatization period to safely return to play,” said M. Grace Calhoun, athletics director at Pennsylvania and chair of the Division I Council. “The Council members believe approving this model is a positive step forward for the sport.”