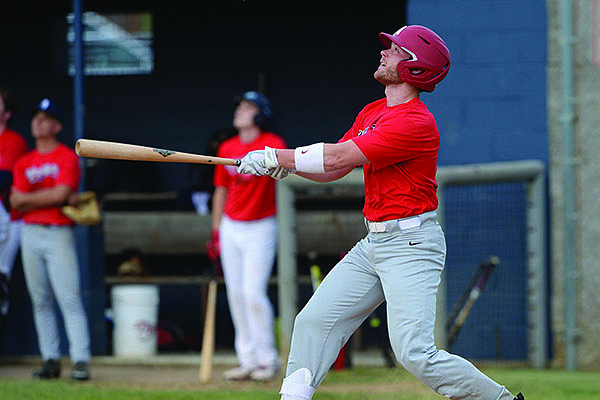 Smith smashed a long home run to center field during PT White’s 5-2 loss to PT Cardinal at Tyson Park. Smith will be a redshirt senior at the University of Arkansas in 2021 after sitting out this season because of NCAA transfer rules.

Smith is an infielder who played three seasons at East Tennessee State, where he hit .304 with 7 home runs, 14 doubles, and 30 RBI as a junior in 2019. He hit his home run Wednesday to straightaway center field off Kevin Kopps, his teammate at Arkansas.

“I knew I was facing Kopps, so I knew I was going to be getting a lot of cutters,” Smith said. “I got one up, that was about it. I know we’re going into the fall (practice) and we’re going to have plenty of battles. But it felt good, so I’m excited.”

The Major League Draft is over, but the search for baseball talent continues.

The Major League Draft was limited to only five rounds this year, which leaves plenty of room for scouts to sign free agents and to look at players for future drafts.

Scouts representing the New York Yankees, San Francisco Giants, and San Diego Padres had stopwatches and radar guns out while watching a 5:30 p.m. game Wednesday in the Perfect Timing College Baseball League at Tyson Field in Springdale. The radar guns were out and focused on the mound when Jacob Burton took over for PT White in the third inning.

Burton is a hard-throwing sophomore who made five appearances in a shortened season for Arkansas. Burton made 11 appearances as a freshman for the Razorbacks, all in relief.

Burton went down after being hit on the leg by a hard grounder Wednesday, but he recovered and threw the runner out at first base.