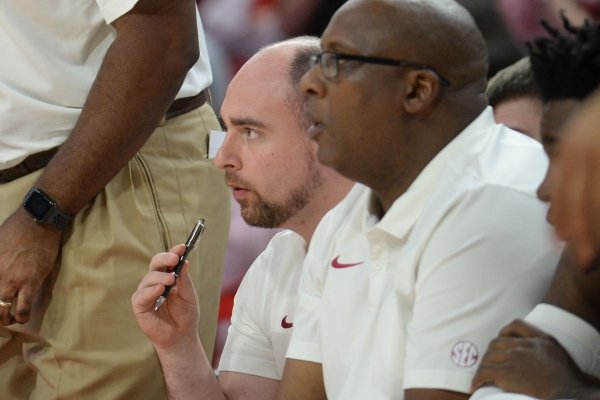 Arkansas director of basketball operations Anthony Ruta (left) began his coaching career as a graduate assistant at Arizona State, his alma mater, during the 2012-13 season. That is where he met Eric Musselman, who was then an assistant for the Sun Devils.

Shooting guard James White had a Zoom meeting with Arkansas basketball director of operations Anthony Ruta on Wednesday, and a virtual tour is on the agenda.

Because Arkansas is short an assistant with the departure Chris Crutchfield to a head coaching job, Ruta is temporarily filling in and is able to recruit.

Ruta and White have been texting and talking on the phone prior to the Zoom meeting. White described Wednesday’s conversation as being about the Razorbacks' style of play.

“(Ruta) said we’re going to get on another one soon for the campus tour and facilities and all that," White said.

White, 6-5, 175 pounds, of Conyers, (Ga.) Heritage has 16 offers, including from Florida State, Alabama, Florida, Georgia, Arizona State, Georgia Tech and others. He is drawing strong interest from the Razorbacks.

“I shoot the ball very well. I can get to the basket off the bounce also to set my teammates up in good positions for them to score,” White said. “Also, at 6-5, I can rebound the ball very well and can guard the 1-3 positions which makes me very versatile, and also (I'm) able to play the 1-3 with my playmaking ability.”

White has had positive interaction with Ruta.

“He’s a great coach. He’s a player's guy,” White said. “He really likes his guys. He likes my ability to score the ball.”