Mixed feelings: Players disappointed for Opitz, but happy to see him return 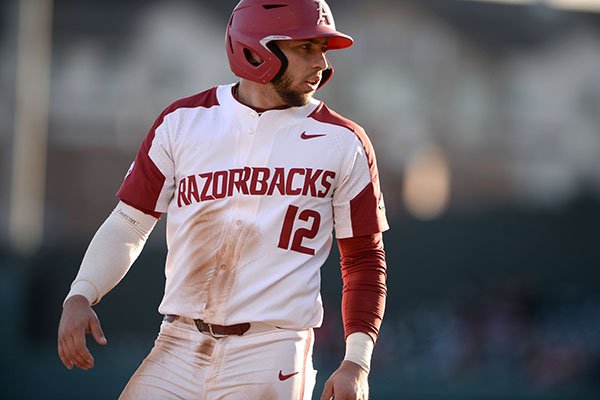 Arkansas catcher Casey Opitz stands on third base Friday, Feb. 21, 2020, after hitting a triple off the outfield wall during the sixth inning against Gonzaga at Baum-Walker Stadium in Fayetteville.

FAYETTEVILLE — When it comes to catcher Casey Opitz not being drafted last week, there is a similar theme around the Arkansas baseball program.

Players said there is disappointment about draft night, but excitement about the future.

“He’s been my roommate for the past two years, so I was hoping the best for him,” junior pitcher Kole Ramage said. “I was hoping some team was going to take him and he was going to be able to live out his dream of playing professional baseball.

“But just being selfish, I always wanted him to come back and play another year. He’s one of the best teammates you can ask for. He’s a really good roommate and just someone you enjoy being around.”

By going undrafted, Opitz will return in 2021 as a third-year starter behind the plate. Defensively, few have been better in college baseball the past two seasons, and Opitz has swung an effective bat as a switch hitter.

He threw out 6 of 16 base runners this year, slightly below his 47.8 percent clip as a sophomore.

“If there ever was a five-star, it’s him,” said Elijah Trest, a sophomore pitcher.

“There’s not a better catcher in the country, in my opinion.”

Opitz will provide SEC experience at a position that would have been lacking it had he gone pro this year. He started 64 of 74 games the past two seasons, and started 29 of 30 conference games a year ago. The Razorbacks didn’t play any SEC games this year.

Had Opitz not returned, Arkansas’ catcher position next season likely would have been filled by either second-year freshman Cason Tollett or graduate transfers A.J. Lewis (Eastern Kentucky) or Robert Emery (San Francisco). Dominic Tamez, who started twice as a freshman this year, entered the NCAA’s transfer portal last month.

“It would have been difficult to come in and try to fill his shoes,” Trest said. “I think we definitely got better, by a lot, getting him back. He knows the ropes, he’s been to the last game of the year, to the World Series. I think he’s just really well seasoned.

“He steals a lot of strikes for us that might have not actually been strikes. There’s really nobody better.”

Jacob Nesbit, a sophomore infielder, is also a roommate of Opitz and has spoken to him since draft night.

“He’s ready to get back after it with our team and figure out what we’ve got,” Nesbit said. “We’ve got things to accomplish and he knows that, and we’re excited to get back to work.

“I think on draft night all of us kind of had mixed emotions because we obviously wanted him to get drafted, but obviously things happened the way they did and we’re just more than happy to have him back.”

Nesbit said Opitz will add a strong voice to the Razorbacks’ clubhouse. He was a team captain this season.

“Having a leader like that in the locker room, on the field is going to be huge for our team,” Nesbit said.

“He’s obviously a great player, but the personality skills, you can’t teach stuff like that.”

Opitz’s situation is similar to that of former Arkansas pitchers Blaine Knight and Isaiah Campbell, who returned to Arkansas with draft leverage after falling in the draft in their first year of eligibility as a college player. Opitz will be a junior again next season because the NCAA gave players back a year of eligibility that was lost when the covid-19 pandemic ended the 2020 season after less than five weeks of play.

In all their cases, Knight, Campbell and Opitz could have been selected high, but didn't come to financial terms with teams that were interested in the early rounds.

The draft was 40 rounds when Knight and Campbell decided to return in 2017 and 2018. It was shortened to five rounds this year.

"For him to sign, obviously he wanted a certain amount of money or maybe the right fit, the right organization," Arkansas coach Dave Van Horn said of Opitz. "I don’t think it all fell into place for him. He got a lot of calls and there was a lot of interest in him. It just didn’t work out.

"I think you’ve got to give him credit. He knew he could come back and be draft eligible with some bargaining power next year and get to play with his teammates another year."

Knight and Campbell responded by putting together two of the great individual seasons by an Arkansas pitcher and were drafted in the third and second rounds, respectively, the year after their draft disappointment. The same could be the case for Opitz in 2021.

“I have no doubt in my mind that he’ll be the first catcher drafted next year,” Trest said. “He’s just that good. There really are no words to describe how much he’s helped me as a pitcher and as a person. He’ll come up to you and talk to you and calm you down, and as a freshman that was really helpful.”

“It’s terrible that he didn’t get his opportunity this year,” Ramage said, “but I know he’s going to make the best out of this and he’s going to show these teams, ‘You missed out on someone you could have taken this year, and you’re going to see someone that’s even better when I come back and play next year.’

“I really think he’s going to take a bigger step and really show off this next year, and show that he’s someone who deserves to be drafted, and drafted high.”