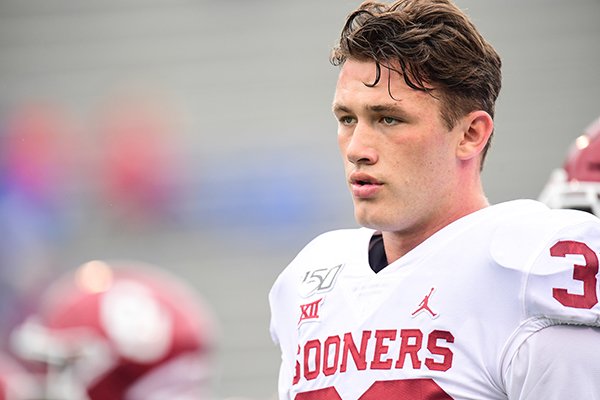 Photo by Photo by Joshua R. Gateley, via Oklahoma Athletics

Oklahoma linebacker Levi Draper is shown prior to a game against Kansas on Saturday, Oct. 5, 2019, in Lawrence, Kan.

Levi Draper’s familiarity with the Arkansas Razorbacks predates long before his announcement in early February that he’d be coming to Fayetteville to play football.

Draper hails from Collinsville, Okla., which is a short trip north of Tulsa. The drive east from Collinsville to Fayetteville takes about as long as the one he so often took southwest to Norman, Okla., where Draper, a 6-1, 234-pound linebacker, used to play for the Oklahoma Sooners.

Draper grew up with a fair amount of Razorback fans around him, and he knew of people who went to the University of Arkansas from his own area. One of those was Keon Hatcher, who, like Draper, is from the Tulsa area. Hatcher, who played at Owasso High School, was a wide receiver for the Razorbacks from 2012-16 before going on to play briefly in the NFL. Draper followed the success Hatcher had on the Hill.

After deciding to transfer from the Sooners in January, Arkansas made too much sense to pass up.

“It just had a real family feel to it,” said Draper, who took an unofficial visit to Fayetteville on Feb. 1 before orally committing three days later on Feb. 4. “As soon as I walked in the building, everyone’s treated like family, everyone’s treated with respect. It didn’t seem like a visit, nothing like that — it seemed like people in that building genuinely care.

“I felt like that left a great impression on me and even more so on my parents. I felt like it was a great fit.”

Draper At a Glance

NOTEWORTHY Was a four-star prospect, the No. 2 overall recruit in Oklahoma and the nation’s No. 5 inside linebacker coming out of high school, according to 247 Sports Composite. … Was also a U.S. Army All-American. … Redshirted his freshman year at Oklahoma in 2017 because of injury. … Played in all 28 games over the next two seasons, but it was mostly on special teams. … Tallied three tackles in his career.

It was Pittman who once recruited Draper back when he was in high school blossoming into a four-star prospect and one of the nation’s top recruits at his position. Draper said Pittman recruited him first when the coach was an assistant at Arkansas under Bret Bielema, then later when Pittman was an assistant at Georgia.

“I’d always loved Coach Pittman,” said Draper, who’s one of five graduate transfers Pittman signed this offseason. “He grew up not too far away from where I grew up, so I think there’s similar backgrounds there. I just think he’s a great guy.”

Pittman acknowledged his pre-existing relationship with Draper during his national signing day news conference in February.

“First of all, we knew what kind of kid he was. We knew he was a great kid,” Pittman said Feb. 5. “We knew he could run. We tried to recruit him at Georgia when I was there, so I got to know him and the family.

“Sometimes you just have to believe that the guy’s the high school kid that you were recruiting. What happened over there at [Oklahoma], I don’t know. We saw enough tape on him playing at Oklahoma that we felt like he could come in here and help us.”

Draper — the No. 2 overall recruit in the state of Oklahoma and the No. 5 inside linebacker nationally in high school, per 247 Sports Composite — didn’t want to delve deep into why things didn’t work out at Oklahoma, but he did say he wanted to see the field more often.

After redshirting his true freshman season in 2017, the result of undergoing surgery to repair a torn labrum, Draper appeared in all 28 games over the next two seasons, but it was mostly in a special-teams role. He has a total of three tackles in his college career.

“You put in that work, you want to be on the field, and I wasn’t on the field as much as I wanted to be,” Draper said. “The timing worked out perfect where I was able to make a move and get another opportunity, so I’m excited about that.”

During his time in Norman, Draper experienced plenty of change.

After the early enrollee’s first spring with the Sooners in 2017, head coach Bob Stoops retired in June of that year after an 18-year run, handing over the reins to offensive coordinator Lincoln Riley.

There was plenty of shuffling on the defensive staff after that.

From 2017-19, the Sooners had three different defensive coordinators — Mike Stoops, Ruffin McNeill and Alex Grinch — and two different inside linebackers coaches — Tim Kish and Brian Odom, who is the younger brother of Draper’s new defensive coordinator Barry Odom. Draper described all the defensive coaching changes he experienced in Norman as “a shock to the system.”

But Draper was a member of some highly successful teams. Oklahoma appeared in the College Football Playoff three consecutive times and won three Big 12 titles.

“Obviously, I didn’t play as big a role in it as I would have liked to, but still, being on the field and being a part of it was huge,” Draper said. “I made some lifelong friends and accomplished some pretty cool things over there as a team. I enjoyed my time over there and there’s no hard feelings, nothing like that over there, and I have love for everybody over there.”

At Arkansas, Draper is hoping things are different.

“Levi has all the tools it takes to be successful at linebacker, and that’s exciting,” said Arkansas linebackers coach Rion Rhoades, Draper’s new position coach. “He’s got a great personality. I think he’ll be really good to have in our room.

“There were some challenges for Levi with several different defensive coordinators and a couple of different position coaches at least that maybe impacted his experience at Oklahoma. But I’m not too worried about that as much as I’m excited about the skill level. He can run, he’s got good size. And so adding a guy to that class is really good for us, because [junior linebacker] Bumper Pool would be the only junior without Levi joining us, so it’s nice to add a guy to that class for our room.”

With two years of eligibility remaining, Draper will try to find success at Arkansas. He’s not the only one in a class of five graduate transfers.

Like former Clemson defensive lineman Xavier Kelly, one of his fellow grad transfers, Draper is transitioning from playing for a program that’s used to being a national contender to one that’s won a combined eight games the past three seasons.

But Draper is optimistic about what Pittman and the new staff can do.

“I think anytime there’s change, it brings a new opportunity and new life to a program,” Draper said. “I feel like we have that going on here.”