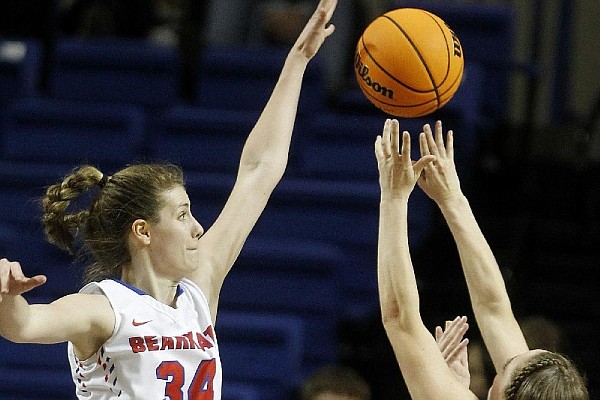 Conway guard Chloe Clardy was the first in-state prospect to receive an offer from Neighbors in the 2023 class as a seventh grader. Wing Jenna Lawrence, 6-2, of Melbourne, had offers from Southern Miss, Ole Miss, Arkansas State and Saint Louis before she learned she was receiving the fifth scholarship offer of her young career.

She said her performance at the recent Insider Exposure Jr. All-American Camp in Memphis on June 13-14 was a topic of discussion with Neighbors.

“We were just talking about how I went to an exposure camp two weekends ago and he said that he had gotten several phone calls about me and them asking him if they knew who I was,” Lawrence said. “He said yes and then he said, ’As of today, you’ve been offered a scholarship to Arkansas.’”

Lawrence was elated by the offer.

“I was absolutely thrilled. I put my hands on my face and bent down and almost started crying,” she said. “It’s been my dream to get an offer from the U of A, and it’s now becoming a reality.”

Lawrence averaged 11.2 points, 5.1 rebounds, 1.7 block shots and 1.1 steals per game as a freshman to lead the Bearkatz to a second consecutive Class 2A state title with a 47-28 victory over Quitman. Lawrence scored 11 points, grabbed 4 rebounds and blocked 7 shots in the championship game.

She was tempted to commit to Neighbors on the spot.

“I am going to keep going with the recruitment process and seeing what other schools are interested in me,” Lawrence said.

Lawrence, who was supposed to play for the Woodz Elite AAU program this spring and summer, met Neighbors last year and their relationship has grown since.

“I first met Coach Neighbors when I attended his elite camp last summer and we’ve been talking ever since,” said Lawrence, who made an unofficial visit to Fayetteville for a football game last November. “Fun personality, easy to talk to.

"I love his coaching style and the way he runs his offense, and he’s a player’s coach.”