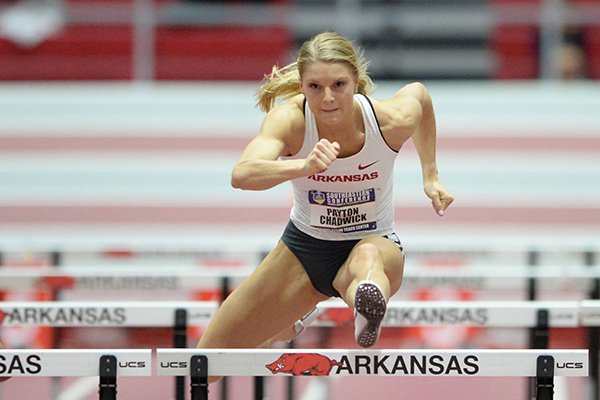 Arkansas' Payton Chadwick clears the final hurdle as she competes Friday, Feb. 22, 2019, in a preliminary of the 60-meter hurdles during the Southeastern Conference Indoor Track and Field Championship at the Randal Tyson Track Center in Fayetteville.

FAYETTEVILLE -- Payton Chadwick was supposed to be among many former and current University of Arkansas athletes competing at the United State Olympic Trials this week in Eugene, Ore.

But instead of running the 100-meter hurdles at Oregon's renovated Hayward Field, Chadwick is training on grass fields at Mount Kessler Park and Lake Fayetteville.

Chadwick and her training partners, including former Razorback NCAA pentathlon champion Taliyah Brooks, are working with Arkansas assistant coach Chris Johnson on the grass because the UA facilities aren't yet open for track and field athletes because of the coronavirus pandemic.

The coronavirus also has caused the postponement of the 2020 U.S. Trials and the Olympics until 2021.

"It's crazy to think about how we should be in Eugene right now," said Chadwick, the 2018 NCAA champion in the 60-meter hurdles who took second in the event at this year's U.S. Indoor Championships. "But I'm trying to take the postponement as a positive.

"I'm like, 'I can use this year to grow as an athlete, get stronger and put myself in a better position for next year.' "

Sandi Morris, the 2016 Olympic silver medalist in the pole vault and a four-time U.S. champion who won the NCAA title at the 2015 indoor meet as a Razorback, has been training in her hometown of Greenville, S.C., at a pole vault pit she built along with her father and some family friends.

"I don't feel like they had any other choice," Morris said of the announcement in late March that the Tokyo Olympics were being postponed for a year. "Trying to get so many people together from across the world doesn't make sense right now.

"Just with all of the unknowns, I think the best decision was to go ahead and postpone it for a year. I'm glad they decided to do that because now we have the ability to wait and see what happens with the virus and then make a plan."

Morris said athletes, especially those competing at a world-class level, need to have a schedule for training and competing.

"As an athlete, your whole life is one, grand plan," she said. "Everything is planned out. Week-to-week training, day-to-day training. When you're going to peak with your training cycles and weight-lifting.

"I don't even know when my first competition might be this year. How could I plan my training to peak for the Olympics? It would be impossible."

Former Razorback Mike Conley was the gold medalist in the triple jump at the 1992 Olympics and took the silver medal in 1984.

Now serving in a volunteer role for USA Track and Field as committee chairman for high performance athletes, Conley said he believes it would have been better if the 2020 Olympics had been postponed to 2022 rather than one year.

"Because there's still going to be some angst about [the coronavirus] even next year, right?" Conley said. "Hopefully, this year will just be an asterisk and we can put it behind us and keep moving forward and be back to normal in 2021, but I'm not sure about it."

"I think they should have delayed the Olympics to 2022, so they could put it on an even year," Bucknam said. "Then in 2024 we're back on schedule.

"In 2021 you could have the World Championships in all the various Olympic sports with fewer people at different locations instead of everyone being together in Tokyo. I don't think they're going to have the Olympics until there's a vaccine [for the coronavirus]. It's just too big of a concern. Then if there is a vaccine by 2021, you don't know if they'll be able to get it dispersed all over the world."

Bucknam said he's worried what could happen if the Olympics have to be postponed again.

"You can't just keeping the can down the road," he said. "If the Olympics are postponed in 2021, I think you run a huge risk of maybe it even being canceled. I think it would hurt the Olympic brand."

"We've got to think positive and believe the Olympics will be back in 2021," Harter said. "They'll never cancel the Olympics. It's too big of a business.

"It's bad enough to take the Olympics away from the athletes for one year, but telling them that now we're going to take it away from you for two years? I don't see that happening.

"Especially for the older athletes, this next Olympics might be their swan song. They're going, 'Hey, this can't come soon enough.' "

Twin sisters Lexi Jacobus and Tori Hoggard were both NCAA champion pole vaulters for Arkansas. They delayed enrolling in pharmacy school for a year to train for the 2020 Olympics.

Now the twins will be attending pharmacy school in August at the University of Arkansas for Medical Sciences in Little Rock and training for the Olympics.

"It was kind of inevitable the Olympics were going to be either canceled or postponed," said Jacobus, who competed for the U.S. at the 2016 Olympics after her freshman year at Arkansas. "For us, it wasn't a surprise. But it obviously was very disappointing considering we've all worked so hard in the offseason leading into what we thought was going to be the 2020 Olympics.

"You wait four years for the Olympics to come around, and you prepare for it. Now we just have to re-adjust."

Distance runner Dominique Scott-Efurd, a five-time NCAA champion for the Razorbacks, competed for her native South Africa in the 10,000 in the 2016 Olympics and is working for a return trip to Tokyo.

Last summer Scott-Efurd and her husband, former Arkansas distance runner Cameron Efurd, moved to Boulder, Colo., so she could run at high altitude with her training group.

The group had been scheduled to open the outdoor season at the Stanford Invitational in early April.

"When the Stanford Invite got canceled, we were all pretty bummed," Scott-Efurd said. "Then one meet after the next was getting canceled, so I think we all knew that it was coming for the Olympics."

Scott-Efurd said as disappointing as the Olympics postponement has been, she tries not to let it get her down.

"We have to look at the positives," she said. "The Olympics weren't canceled. We're still going to get them in 2021 hopefully.

"I think for myself personally, identifying and realizing I didn't have any control in this scenario gave me a lot of peace with it. I've really been trying to focus on what I can control right now, and that's being positive, showing up to my workouts with a good attitude and a smile on my face and just doing everything I can to be a good teammate, a good friend and a good wife.

"Because at the end of the day, I can't control when the Olympics happen."

Chadwick, who is from Springdale, competed in the heptathlon before focusing on the hurdles and sprints.

"I don't like running long distances," she said with a laugh. "So with the training we're doing now on the grass, I have to give props to those cross country runners, because grass really doesn't give you that bounce back that the track gives you.

"The good thing is it's making us stronger for when we are able to get back on the track."

Conley said USA Track and Field is hopeful of having some meets in the fall but whether that happens remains uncertain.

"We're in the process of trying to see if we can some kind of national championships in September," he said. "But it's all still very tentative. Obviously, it depends on a lot of things."

Chadwick said the hope of being able to compete again in 2020 helps her stay motivated during workouts.

"I'm staying in shape and staying on my toes for whenever my agent reaches out to me and says, 'Hey, I've got you in a meet. You're going to leave tomorrow,' " Chadwick said. "I'm just making sure I'm ready if that is to happen this year."

Chadwick said she's hopeful the U.S. Trials and Olympics can be held in 2021.

"If they were to be pushed back again, then I guess that's just going to be survival of the fittest," she said. "It will be about who can mentally keep going and keep pushing to try to make that Olympic team."