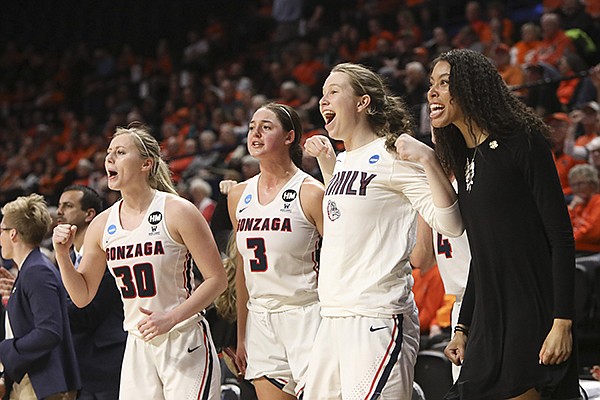 The Gonzaga bench, including, from left to right, Chandler Smith (30), Jenn Wirth (3), Gillian Barfield and Kylee Griffin, celebrate a call in their favor during the second half of a first-round game of the NCAA women's college basketball tournament against Little Rock in Corvallis, Ore., Saturday, March 23, 2019. (AP Photo/Amanda Loman)

FAYETTEVILLE — Arkansas’ 2020-21 women’s basketball schedule will include a game against Gonzaga at Bud Walton Arena.

The Razorbacks and Bulldogs are scheduled to play Dec. 13, according to a game contract provided through an open records request. This year's game will be the first meeting between the programs and will be the first game in a home-and-home agreement.

Arkansas will return a game in Spokane, Wash., during the 2021-22 season, according to the game contract.

Gonzaga was 28-3 when the 2019-20 season was suspended in March prior to the start of the NCAA Tournament. The Bulldogs won the regular-season championship in the West Coast Conference but were upset 70-69 by Portland in the semifinals of the WCC Tournament.

The Bulldogs are expected to return three of their four leading scorers from last season in guard Jill Townsend (12.3 points per game) and forwards Jenn Wirth (10.8) and LeeAnne Wirth (8.7). Townsend and the Wirth twins were also Gonzaga’s leading rebounders last season with a combined average of 17.2 per game, and the Wirths combined to block 50 shots.

Townsend is the reigning WCC player of the year.

Arkansas is expected to return six of its seven leading scorers from last season, including leading scorer Chelsea Dungee (16.9) and Amber Ramirez (14.7).

The game against Gonzaga is the fourth known nonconference game for the Razorbacks in the upcoming season. Arkansas is also scheduled to host Baylor in the Big 12/SEC Challenge, host California and play Arkansas-Little Rock at Simmons Bank Arena in North Little Rock. Dates for those games have not been announced.

The Razorbacks are scheduled to play Cal and UALR for the second consecutive season. Arkansas lost 84-80 at Cal last season in the front end of a home-and-home series, and the Razorbacks defeated UALR 86-53 in North Little Rock.

Arkansas coach Mike Neighbors said earlier this month the Razorbacks will begin a four-year home-and-home arrangement against UALR in 2021-22.