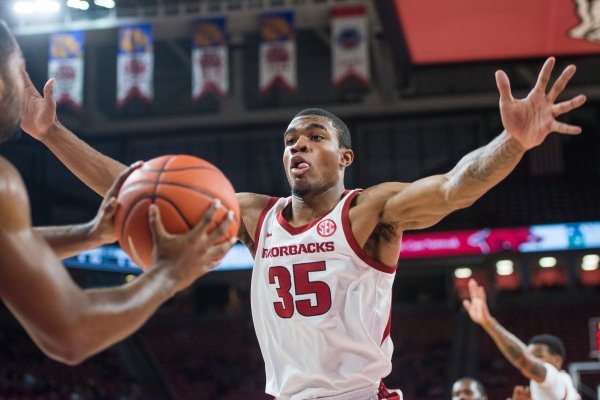 Reggie Chaney of Arkansas defends as Tusculum inbounds the ball in the first half Friday, Oct. 26, 2018, during an exhibition game in Bud Walton Arena in Fayetteville.

Chaney's post on his Twitter account about transferring to Houston came a week after sources confirmed he was entering the transfer portal after playing at the University of Arkansas for two seasons.

Chaney, a 6-8 forward from Tulsa, will have two years of eligibility to play at Houston. He must redshirt during the 2020-21 season in accordance with NCAA transfer rules unless he seeks and is granted a waiver for immediate eligibility.

Chaney began his Twitter post by thanking God and his family for letting him play the game he loves. He also expressed positive feelings about his time at Arkansas.

"These past two years being an Arkansas Razorback have been a wonderful experience," Chaney wrote. "With that being said, I have decided to continue my academic and athletic career at the University of Houston."

Chaney thanked both of his head coaches at Arkansas -- Mike Anderson and Eric Musselman -- for recruiting him and helping him develop as a player.

"To my teammates, thank you for pushing me each and every day in practice," Chaney wrote. "All the memories we have, I will cherish ..."

Chaney also thanked the Arkansas fans for their love and support.

"It truly has been a pleasure to play at Bud Walton Arena," he wrote. "Excited to see what this next chapter has for me."

Chaney played in 63 games for the Razorbacks as a freshman and sophomore, including nine starts, and averaged 4.8 points and 3.4 rebounds.

He had career-highs of 17 points and 11 rebounds in 36 minutes in an 83-79 overtime loss at Missouri last season. He also scored 14 points and hit 6 of 6 shots and 2 of 2 free throws in a 75-55 victory over Vanderbilt in Walton Arena last season.

Chaney's decision to transfer wasn't a surprise considering his playing time decreased late in the season after Ethan Henderson -- who will be a junior next season -- moved ahead of him in the rotation. In Chaney's last seven games, he averaged 6.6 minutes.

Houston, coached by Kelvin Sampson, was 23-8 last season and finished No. 22 in The Associated Press Top 25 poll. The Cougars went 13-5 in the American Athletic Conference to share the regular-season title with Cincinnati and Tulsa.

Chaney was rated a 3-star recruit as a high school senior at Findlay Prep in Nevada. He is the second player to transfer from Arkansas since the end of the season. Jalen Harris transferred to Georgetown, where he'll have immediate eligibility as a graduate transfer.

Chaney's transfer has Arkansas at the NCAA limit of 13 scholarship players, including guard Isaiah Joe, who has entered the NBA Draft but hasn't signed with an agent to retain his eligibility.

Joe has until Aug. 3 or 10 days after the NBA scouting combine -- whichever comes first -- to decide whether to stay in the draft or return to Arkansas for his junior season. The combine, which was supposed to be held May 21-24, has yet to be rescheduled.