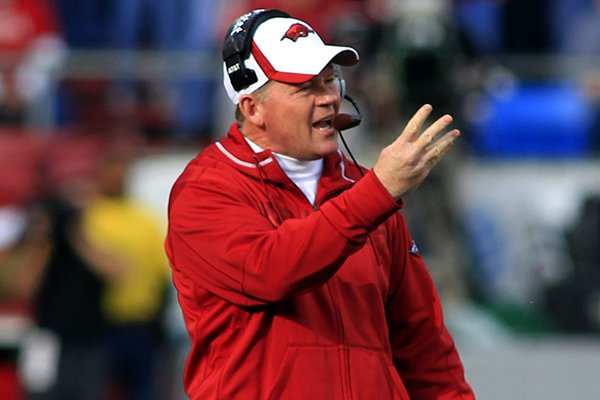 First-year recruiting classes for University of Arkansas football coaches since the inception of recruiting services have had their own unique challenges.

Former coaches Bobby Petrino, Bret Bielema and Chad Morris, and current Coach Sam Pittman were the ones tasked with navigating the obstacles.

Petrino inherited the most stable situation when he arrived in Fayetteville after Houston Nutt's 10-year run ended with a 75-48 record that included the 50-48, three-overtime victory over LSU that ended Nutt's tenure.

National recruiting analyst Tom Lemming hosts The Lemming Report on CBS Sports Network, and Nutt is one of his co-hosts.

"Houston knew Arkansas, and he did a good job of recruiting," Lemming said. "I'm not saying that because he's one of my co-hosts, but overall he did a terrific job."

Central Arkansas Christian athlete Joe Adams was ESPN"s highest-rated prospect in the class. He was the No. 41 recruit nationally while Camden Fairview running back De'Anthony Curtis came in at No. 76. Quarterback Tyler Wilson of Greenwood was listed as the No. 81 prospect in the nation. Athlete Jerico Nelson of Destrehan, La., was the fourth prospect in the class to receive a grade of 80 or more, which now translates to being a 4-star prospect.

The Hogs inked 12 more in-state prospects in the class, including receivers Jarius Wright, Greg Childs and Chris Gragg of Warren. Former Arkansas assistant and recruiting coordinator Tim Horton is credited with keeping the in-state class intact during the two-and-a-half weeks before Petrino was hired.

"Tim was an outstanding recruiter," said Lemming, who's been covering national recruiting since 1978. "He's the guy that should've never left Arkansas. He was like Mr. Arkansas. He did a great job.

"He always did a tremendous job of promoting the school, too. If you look back at all the years I've been doing this, Tim has to be ranked as one of the best recruiters in Arkansas history."

Fresh off a 5-7 record in his first year, Petrino signed what is considered the best Arkansas class since recruiting services started in the early 2000s.

In-state cornerback Darius Winston of Helena-West Helena was the headliner. ESPN rated him the No. 3 cornerback and No. 25 overall prospect in the nation. Tulsa East Central's David Gordon was rated the No. 12 cornerback nationally. ESPN rated Knile Davis of Missouri City (Texas) Marshall the No. 20 running back in the nation.

"It was a very athletic class that filled all their needs, and they turned out to be some of the best athletes at Arkansas in recent history," Lemming said.

Petrino was fired in the spring of 2012 after having a 34-17 record in four seasons and was replaced by interim coach John L. Smith, who led the Hogs to a 4-8 record in his one season.

ESPN rated five signees in the 2014 class as 4-star prospects, with running back Alex Collins of Plantation (Fla.) South Plantation and Pulaski Academy tight end Hunter Henry headlining the class. Collins was the No. 7 running back and No. 57 overall recruit in the nation, while Henry was the No. 2 tight end and No. 69 overall prospect.

"When he was at Wisconsin, he did an outstanding job recruiting the state and skill position players who can fit into his program," Lemming said of Bielema. "He brought that same recruiting mentality to Arkansas. He did a very good job the first couple of years."

Bielema's second class averaged out as the No. 29 class nationally. Rivals, 247 and Lemming put it at No. 29, while ESPN ranked it No. 30. Lemming believes Bielema was surprised by the dog-eat-dog mentality of the SEC in recruiting.

"Super aggressive and nonstop, you couldn't catch your breath," Lemming said of the SEC. "Recruiting was 24/7. In the Big Ten, it was seasonal. You always recruited, but not to the aggressiveness they did in the SEC back then."

After Morris' second class, Lemming thought the Hogs were headed in the right direction.

"I just thought he did a terrific job in Texas, and he had a lot of connections," Lemming said. "To me at the time, I really thought Arkansas was zooming up there, but things were falling apart on the field, but recruiting wise I think he would've continued doing well."

Pittman and his staff pulled off one of the more surprising recruiting classes for the 2020 class. The class averaged out to be the No. 31 class nationally with it being listed as No. 41 by Rivals, No. 30 by 247, No. 29 by ESPN and No. 26 by Lemming.

Pittman, who was hired on Dec. 8, inked nine prospects during the Dec. 18-20 early signing period.

ESPN rated five in the class 4-star prospects, featuring Memphis Central athlete Darin Turner, the No. 18 receiver in the nation; Memphis University School's Marcus Henderson, the No. 6 offensive guard in the nation; and the No. 15 cornerback in Myles Slusher of Broken Arrow, Okla.

Malik Hornsby of Missouri City (Texas) Marshall was rated the No. 9 dual-threat quarterback, and Hazen's Blayne Toll was the No. 19 athlete.

Pittman had to recruit after one of the worst periods of Arkansas football that saw the Razorbacks go 4-8, 2-10 and 2-10 in the previous three seasons.

"It comes down to the ability of the head coach to convince the recruits his program is the one that's going to be the one moving up and get it to be one of the top teams in the conference," Lemming said. "It's more perception that it is reality sometimes in recruiting. If the perception is the program is moving north than you're gong to do well in recruiting. If it's stuck in the perception you're stuck in the middle or going south, you're not going to do well."

Having SEC success in recruiting and on the field bodes well for Pittman's second class and beyond.