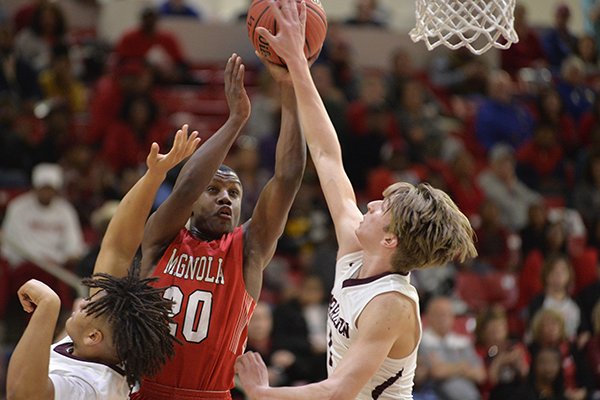 Morrilton's Joseph Pinion blocks the shot of Magnolia's Derrian Ford (20) during a Class 4A playoff game Thursday, Feb. 28, 2019, in Magnolia.

Virginia, Murray State, Ohio State, Illinois, Baylor, Arkansas, Ole Miss and Central Arkansas were some of the schools that reached out within minutes after midnight.

Pinion, 6-5, 175 pounds, of Morrilton, added offers from Murray State, Baylor, Oklahoma and TCU since that day. He previously had offers from Arkansas, Kansas, Oral Roberts, Tulsa, DePaul, Ole Miss, UCA and other programs.

The offers have poured in despite spring and summer basketball being canceled because of the coronavirus pandemic.

“It’s been a huge blessing and I’m extremely thankful that I’ve been able to be seen through film and highlights,” said Pinion.

Pinion is contacted by an average of about five schools per day, and Arkansas and Ole Miss are the most aggressive in reaching out. He said he is communicating with Razorbacks Coach Eric Musselman and director of basketball operations Anthony Ruta, who is temporarily filling in for recently departed assistant coach Chris Crutchfield.

“Talking about my workouts, about me coming there,” Pinion said. “They want me there and that I’d fit their playing style.”

Pinion, who visited Arkansas last fall, has also made trips to Vanderbilt, Baylor and UCA. He is hearing a common theme when talking to college coaches.

“They told me I’m a good, high-IQ player with a good shot,” Pinion said.

“We’ve never talked about schools besides taking visits together,” Pinion said. “We talked about taking one to Arkansas together.”

Pinion was planning to play for the Joe Johnson Arkansas Hawks on the Adidas Gauntlet Circuit until the virus forced the cancellation of such events.

“I learned that you have to keep working even through the tough times, and if you keep working coaches will find you,” he said.