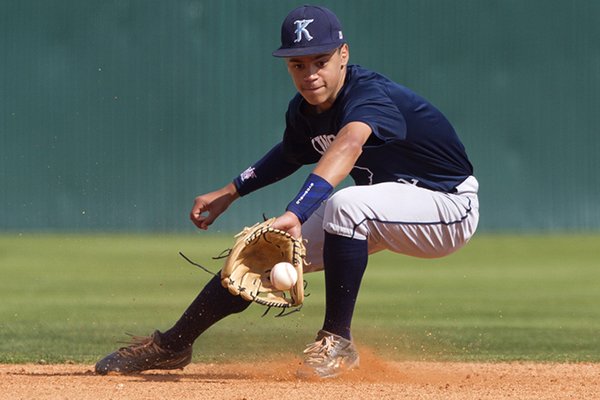 Masyn Winn of Kingwood, Texas, is the No. 8 rated player in the nation, according to Perfect Game, and one of seven top 100 recruits committed to the Razorbacks' class of 2020. (Photo courtesy of Houston Chronicle)

Winn, who was drafted 54th overall by the Cardinals in the second round of the MLB Draft on June 11, signed for $2.1 million, according to Jim Callis of MLB.com. That is 56.8 percent more than the suggested value of $1.33 million for Winn’s position in the draft.

“A dream come true but it’s only the beginning!” Winn wrote on Twitter. “Time to work!”

The Cardinals drafted Winn as a right-handed pitcher and shortstop. Winn recently graduated from Kingwood High School near Houston.

Winn is the first of Arkansas’ three drafted signees to agree to terms since the draft ended two weeks ago. Watson Chapel right-handed pitcher Markevian “Tink” Hence was drafted 63rd overall by the Cardinals, and Canadian outfielder David Calabrese was drafted 82nd overall by the Los Angeles Angels.

Hence and Calabrese are also expected to sign professionally and forgo their college eligibility.