Razorback student assistant not quite finished with baseball 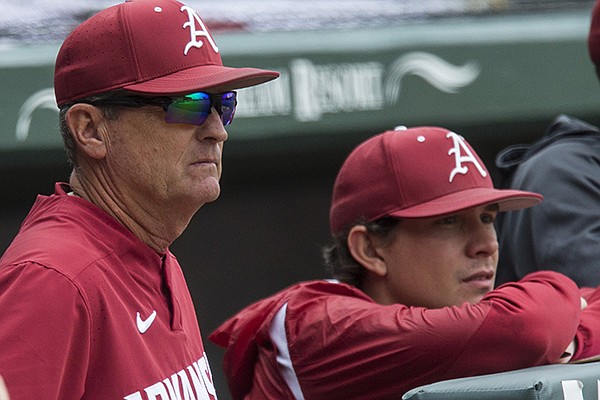 Arkansas coach Dave Van Horn (left) and student assistant Harrison Heffley watch from the dugout during a game against LSU on Saturday, May 11, 2019, in Fayetteville.

The 2016 Rogers graduate is headed to Harding University in the fall to salvage one final year of eligibility, and the Perfect Timing Collegiate Baseball League has helped him prepare.

Heffley went 0 for 3 with a walk as his PT Blue team fell 4-3 to PT Black on Tuesday at Tyson Park. It’s been a process at the plate for him since he hadn’t seen game at-bats since high school.

“This is an incredible opportunity,” Heffley said. “It’s really fun when your last at-bat was in high school and then the next thing you know you’re facing Jacob Burton throwing about 96 up and in on you. It’s a quick learning curve, but it’s been fun.”

The 6-3 left-hander headed for Arkansas after graduation with the idea of pitching for the Razorbacks. But a torn labrum sidelined him, and his velocity never returned to what it was in high school. That meant his pitching days were over.

“Rehabbed for a year, and then came back and as a pitcher it just wasn’t going to work, topping out at 80, 81 miles per hour,” Heffley said.

But he was asked to stay with the team as a student assistant coach, which has been his role from the fall of 2017 through this spring.

“I worked a lot with the analytical stuff with the pitchers,” Heffley said. “This last year, throwing a lot of BP (batting practice) because I was left-handed. That’s valuable. That was awesome because I want to be a coach. That was my motivation there.”

But last year he had thoughts of getting back on the field as a position player. Heffley has family connections at Harding.

“I just like playing ball,” Heffley said. “I just want to be with the team again.”

Heffley’s PT Blue team led 3-1 going into the bottom of the sixth. But PT Black tied it in the sixth and won it in the seventh.

Landry Wilkerson, a Van Buren graduate, drew a leadoff walk in the seventh, stole second, moved to third on a fly ball and scored on Weston Sagely’s single up the middle for the victory.

Braydon Webb, who played 13 games at Arkansas in the spring, ripped an RBI triple into the right-center field gap to pull PT Black within 3-2 in the sixth. He later scored to tie the game on Razorback teammate Jacob Nesbit’s sacrifice fly.