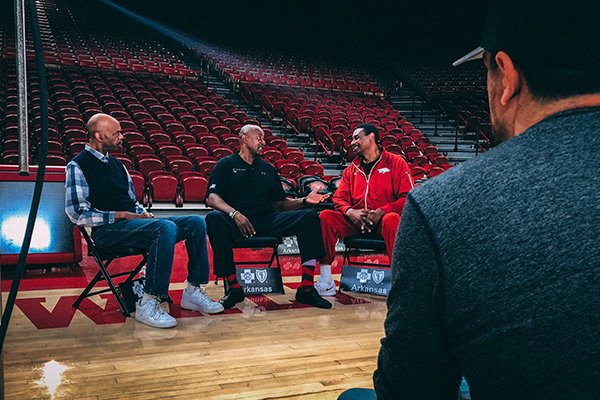 From left to right, former Arkansas basketball players Ron Brewer, Sidney Moncrief and Marvin Delph speak while filmmaker Christopher Hunt, foreground, watches on Wednesday, Feb. 28, 2018, at Bud Walton Arena in Fayetteville. The "Triplets," as the trio is known, were interviewed for a documentary film about their former coach, Eddie Sutton.

"EDDIE" is a 90-minute look at the life of Sutton, who died May 23 at his home in Tulsa, Okla. The film was produced and directed by Christopher Hunt of Oklahoma City. Hunt began working on the film in 2016.

“Ever since we started making this movie we envisioned it landing on one of those (top) platforms," Hunt told WholeHogSports in March, "and we worked to get it to the point of the quality you would expect and the storytelling you’d expect on one of those services.”

EDDIE World Premiere is Monday at 9 EST/8 CST on ESPN! See the commercial below! https://t.co/cXTg9ebb5B

Hunt, who grew up a fan of Oklahoma State while Sutton was the Cowboys’ coach, was inspired to make a film on Sutton after his repeated rejections from the Naismith Hall of Fame. The film will debut two months after Sutton was elected to the Naismith Hall in his seventh time as a finalist.

Hunt estimates that around 15 minutes in his 90-minute film are devoted to Sutton’s years in Arkansas. Sutton was the Razorbacks’ head coach from 1974-85.

During his time at Arkansas, Sutton had a record of 260-75, won or shared five Southwest Conference championships and took the Razorbacks to the NCAA Tournament nine times. Arkansas played in the 1978 Final Four during Sutton's fourth year with the program.

Hunt made multiple trips to Fayetteville during the course of production and interviewed several former players and some long-time Arkansas reporters. Former U.S. President Bill Clinton and Dallas Cowboys owner Jerry Jones were also interviewed about their memories of Sutton in Arkansas.

“The thing specifically to Arkansas that was enjoyable for me was getting to talk to all of those guys kind of all at the same time, digging through some really cool archival footage and seeing the impact he had at Arkansas,” Hunt said. “It’s no wonder to me why he’s still highly regarded over there. The people were really great to work with in Fayetteville. They welcomed us and our production team and our story with open arms.

“It was so great for me to get to learn about Eddie’s time there. That’s where his kids grew up. Sean grew up on the Arkansas bench. I just know the Suttons hold the Arkansas period of Eddie’s coaching career in such high regard. It was just great to get introduced to that.”