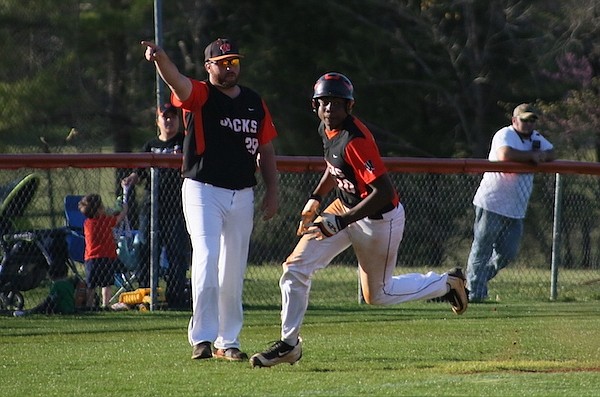 Warren High School center fielder Treylon Burks rounds third base and heads for home in a game during the Lumberjacks' 2016 baseball season.

FAYETTEVILLE — Moments after a walk-off 6-5 win over Warren High School at a tournament in Magnolia in March 2017, Chase Brewster crossed the diamond to meet up with Michael Milum.

A baseball coach at Genoa Central, Brewster was not all that interested in recapping the game that had just ended in his team’s favor. He approached Milum to bend his ear about one of his players, specifically his center fielder.

“Hey,” Brewster said, “that guy right there is a big leaguer.”

“If he’s better in football than he is at baseball then he’s the best football player the state has ever had,” Brewster replied.

The two coaches were referencing budding Warren star Treylon Burks, then a sophomore. In the Lumberjacks’ loss, Burks, who went on to total 3,403 receiving yards and 43 touchdowns in his high school football career, had legged out a triple, driven in a run and gunned down a runner at the plate with the bases loaded.

This is the first in a multi-part series detailing the other sport(s) Arkansas athletes could have played collegiately.

Brewster, now the coach of the Arkansas Sticks travel baseball program, admits Genoa Central didn’t really know who Burks was at the time. But after nearly circling the bases in his first at-bat that day, the staff quickly found out there was something different about No. 10 in black and orange.

They opted to tread lightly. Burks did not get anything to hit in his next two plate appearances, walking both times.

“He was a kid that because of football and basketball wouldn’t show up until March,” Brewster said. “Warren would have already been playing and he didn’t get nearly the reps most guys do. If he would have played a little bit, he would have had the chance to play as long as he probably wanted to in baseball.

“He’s one of the best baseball players I’ve seen in the five years we’ve had the Sticks and the last 10 years I’ve coached in Arkansas.”

According to Milum, who arrived in Warren in 2016 and recently accepted the head baseball job at Springdale High School, Burks could have played any position on the field and excelled. But based on the Lumberjacks’ team needs, he was stationed in center field.

The coach knew he could run, catch and throw. Milum said he can’t remember a ball landing safely in the outfield grass when Burks was in center.

“Literally, from left center to right center, it was an out,” he said. “We hugged the foul lines with the corner outfielders and let Treylon patrol almost three-quarters of the outfield. He was an asset for us in the field.

“He was special, ain’t no doubt about it. It always looked easy. It would make the opposing team mad because they thought they’d hit a double and then Treylon is camped under it. He could definitely go and get it.”

Brewster and Milum have also seen Burks run through a center-field wall as he tracked down a fly ball. He did it in Magnolia. Milum will never forget the moment or the pit he felt in his stomach as he watched it happen.

He can’t recall a time when Burks didn’t make a catch after crashing into a wall.

“Me, coaching Treylon, we knew what he was on the football field,” he added. “It was almost my most major concern. He’s just a go-getter. A lot of times he had no recollection that there even was a fence. He was just going to catch the ball.

“When he ran into that fence I was probably at the dirt at shortstop by the time he hit the fence. Your heart drops. Shoot, he just bounces up. He had braces, and that was usually the main problem. He ran into the fence a couple of times and it was always his braces cutting his lip.”

Burks was named All-State in baseball his sophomore and junior seasons. He did not play baseball his senior season after tearing his ACL the previous fall while playing football.

There’s no doubt in the minds of Brewster and Milum that he would have been a three-time All-State performer in baseball had he played.

According to MaxPreps, Burks hit .381 and drove in five runs in 14 games as a freshman.

The following season, he posted a .471 batting average in 26 games. He finished with 25 RBI, 4 doubles, 4 triples and an on-base percentage of .611. Burks actually finished his sophomore season hit by more pitches (8) than he had strikeouts (7), per Warren’s MaxPreps stats page.

Brewster said Burks reminds him of Braylon Bishop, an Arkansas baseball commit from Texarkana who is rated the No. 5 player in the class of 2021, according to Perfect Game. They are similar in the way they were able to take over a game in the outfield.

“The day Warren made the state tournament was the first time in 12 years, and of the 21 outs he probably caught 10 of them himself,” Brewster said. “There’s just not many kids you put in center field and realize how good they are and dominate the game. It’s easy to see the shortstop when they get to every ball. It’s easy to see the catcher.

“Treylon was like that in center field. It’s an out if you hit it in the air.”

Austin Ledbetter, a third baseman and right-handed pitcher from Bryant who is committed to play baseball for the Razorbacks, is a good comparison for Burks at the plate.

“He hit for power, but the average is going to be in the .400s,” Brewster said. “He’s a guy that takes what you give him. It’s almost a shame he was so good in football and basketball that he only played baseball a couple of months (each year).”

Burks was offered a spot on the Sticks’ elite team as a 10th and 11th grader, but between football, 7-on-7 and basketball obligations, it never worked out the way Brewster had hoped.

Only a handful of kids have played on that elite team as a 10th grader. The list includes Bishop, Monticello left-handed pitcher Nick Griffin, LSU pitcher Jaden Hill of Ashdown, and Connor Noland, a freshman All-America pitcher for the Razorbacks in 2019.

Milum isn't certain he will coach another player like Burks again. He was top of the charts in every conceivable category and owned the leadership qualities and dedication needed to thrive, the coach said.

“Every impressive thing you’ve ever seen him do on the football field, he was just about as impressive — if not more — on the baseball field,” Milum said. “Baseball was one of those things where the sky could have been the limit for him, no doubt about it.

“He was on a different level than everybody else.”