Signee Davonte Davis to report to UA bigger and stronger 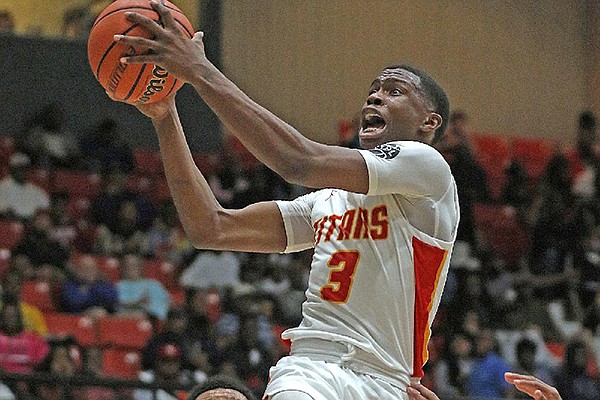 Jacksonville point guard Davonte Davis, who has signed to play at Arkansas, averaged 21 points, 10 rebounds, 8 assists and 3 steals per game this season. He also had seven triple-doubles.

When Arkansas signee Davonte Davis reports to Fayetteville on Friday, he’ll be bigger and stronger than when he signed with the Razorbacks in November.

He started an intense weight lifting regiment when the covid-19 pandemic shut down public schools in March.

“Well just being big and in condition was something that I needed to get better at,” Davis said. “So just pushing myself in the weight room was the key and I did that to better my body. But I’m still not done getting bigger and stronger; just trusting the process. So when it’s time to play in my first college game, I’ll be ready for the all bumps and pushes.”

Davis was named the Arkansas Democrat-Gazette All-Arkansas Preps Boys Basketball Player of the Year after averaging 21 points, 10 rebounds, 8 assists and 3 steals a game while leading Jacksonville to a 20-5 record and the 5A-Central Conference title. Jacksonville was set to play in the 5A state championship game that was called off due to the virus.

He scored at least 20 points in 13 games, scored in double figures every game and had 17 games with at least 10 points and 10 assists. He recorded seven triple-doubles.

Davis works out three times a day for between two and three hours. The workouts include conditioning, weights, basketball and stretching.

“Oh yeah, they have," Davis said. "I’ve posted a couple videos and pictures and the strength coach loves the workouts I’ve been maintaining in the last couple months."

Growing up a Razorback fan, Davis said reporting to Arkansas' campus will be a surreal moment for him.

“It is, just knowing that it’s more to come, taking each step of the process and learning will be great for me but helpful and fun,” Davis said.

Davis is one of four Arkansas high school signees who are ranked in ESPN’s top 100.

Williams, Robinson and Moody are also expected to report to Arkansas on Friday.

Davis said he feeds off the fans and their excitement about his recruiting class.

“It’s great knowing we have the Razorback fan base behind us,” Davis said. “The Razorbacks have the best fans in the country. Can’t wait to play in front of them in Bud Walton.”