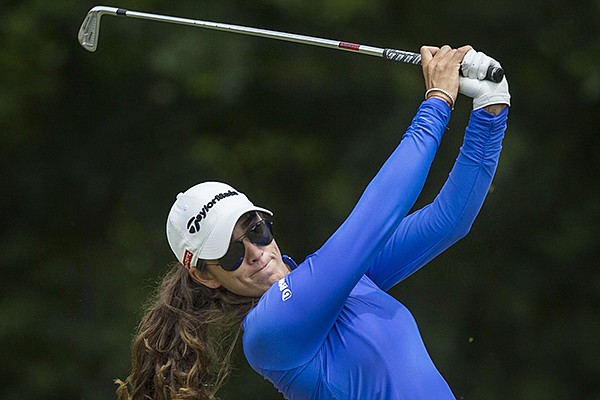 Maria Fassi hits from the tee box Tuesday, June 23, 2020, on hole 15 during the pro-am round of the Cooper Northwest Arkansas Charity Classic golf tournament at Bella Vista Country Club.

BELLA VISTA — Maria Fassi said her first year on the LPGA Tour was a learning experience, particularly off the course.

The 22-year-old former NCAA national champion at the University of Arkansas made 11 starts in 2019 but made the cut in four of the events. Fassi’s first pro start came at the U.S. Women’s Open, where she tied for 12th. That was her best finish in 2019 when she pocketed $129,168 in earnings.

“It’s a lot harder than I thought it was going to be,” Fassi said. “The golf aspect, I think that’s pretty similar to what I thought it was going to be. I knew the competition was going to be hard, but I knew what to expect. For me, the challenge has been outside of golf, traveling and having to pack a bag for six weeks in a row. I think that’s been a challenge that I’m still kind of trying to figure out. I think I’ll figure it out the next few months, but next year I should be all good in that area. It’s like a trial and error, you try something and it doesn’t work, then you try something else.

“I’m starting to slowly figure out what works for me, how many tournaments in a row I can play, if I like staying in hotels or if I like staying in housing or sharing an airbnb with the girls. Those are super hard to learn in the beginning because I had no idea how it would work for me. But now I am slowly getting there, and I’m eager to see what the year looks like and hopefully, by the end of the year, things are back like they used to be.”

Fassi had no issues Wednesday in the opening round of the Women’s All Pro Tour’s NWA Charities Classic at the Scotsdale Golf Course, torching the field with an 8-under 64 to take a 5-shot lead over Hannah Arnold. Fassi’s round included seven birdies and an eagle on No. 18. She shot a 2 under on the front side, before firing a 6 under on the back.

During her time off during the hiatus from the covid-19 pandemic, Fassi did not sit idly at her home in Orlando, Fla. She picked up a couple of new hobbies.

“I like to fish now and I’ve been cooking a lot,” she said. “But I’ve just kind of been taking it one day at a time, trying not to get ahead of myself or too bogged down in what the situation is.

“For the first five weeks, I didn’t do much. I was pretty much a couch potato. I was just trying to take care of my body, letting it rest for a minute. I had some injuries in the past and I was trying to stay on top of those, but after that, I started slowing getting back into it.”

The WAPT has allowed Fassi and other professionals to get back to the groove of competing. Fassi finished second in the Hurricane Creek Classic in Anna, Texas, firing an 8-under and earning a $3,500 paycheck. Kristen Gillman won the event at 14 under.

With the LPGA Tour scheduled to restart in August, Fassi said she will head back to Orlando after this event. There is a similar mini-tour in Florida where she is considering playing one event before the LPGA resumes in Ohio.

“These are well-run events. The main difference is the bigger purses and more players,” Fassi said of the WAPT compared to the LPGA. “They try super hard to make it perfect for us and I’m just thankful they are running, and I’m thankful to be playing golf.”

Fassi said she drove from Dallas to Northwest Arkansas to compete this week. When she topped a hill on Interstate 49 above Fayetteville, she said she felt a sense of being back at home after spending four years at the University of Arkansas.

“I had the biggest smile on my face when I saw the stadium and the big red hog from a distance,” Fassi said. “I’m super happy here. I love it. It makes me really happy to be back and see some old friends.”

Fassi is preparing to see a different LPGA Tour when play resumes, playing with no crowds. She said the players will also have far fewer people traveling with them as compared to pre-covid-19 times.

“It will be weird. For the girls, we might be a little more used to it, but usually we see people out there,” Fassi said of the new fan-free experience. “As of now, that’s what it has to be. Hopefully we can get back to normal sooner rather than later.

On the men’s All Pro Tour on Wednesday, the leaderboard was jammed at the top with three golfers scorching the Bella Vista Country Club at 9 under. Sam Stevens, Blaine Hale and Kyle Pritchard all carded 63s in the first round, and there is little separation as another three came in at 8 under, while seven more were at 7 under.

Stevens’ round included 10 birdies, while Pritchard had 8 birdies and an eagle on the par-5 3rd hole. Hale had an ace on the par-3 2nd to highlight his round.

Saturday’s final round will be played at the Bella Vists Country Club for both the WAPT and the APT.