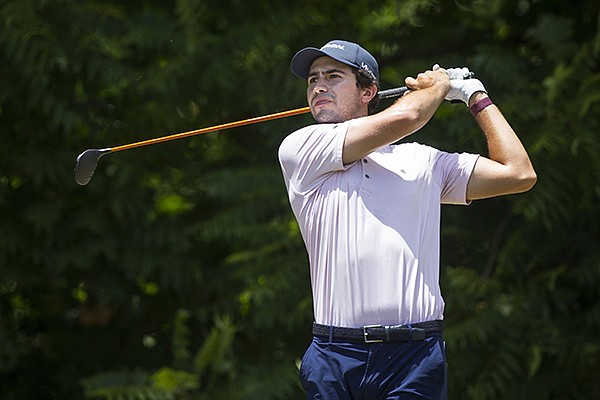 Former Arkansas golfer Alvaro Ortiz drives Wednesday, June 24, 2020, on hole 3 during the first round of the Cooper Communities North

The former University of Arkansas golfer spent the downtime in Dallas, making subtle changes to his swing after the Latin Tour in Mexico suspended play because of the covid-19 pandemic. He was able to use the layoff to work with his swing coach and found some interesting ways to stay competitive on the golf course.

“I looked at it as a time when I could really focus on some changes that my coach and I had talked about,” Ortiz said this week as he began play in the All Pro Tour’s NWA Charity Classic at Bella Vista Country Club. “I mean, it was unlucky that everything had to be shut down, but it actually turned out to be a positive thing for me. We felt like after we made the changes, now my game is trending the right way.”

Ortiz moved to Dallas when the Latin Tour closed and was able to connect with other professionals from various tours like the Korn Ferry. On Tuesdays, a group of 25-30 golfers would get together and compete.

“We played some money games,” Ortiz laughed. “But it was great competition and I was able to do that for about two months and keep my game sharp.”

Ortiz played at Arkansas from 2014-18 and was a second-team All-SEC player as a senior. The Razorbacks’ top scorer also earned a spot on the PING All-Central Regional team. Before signing with Arkansas, Ortiz was the No. 22 ranked player in the 2014 recruiting class.

A year ago, Ortiz was coming off a dream performance in the Masters, where he finished tied for 36th after shooting 73-71-73-69 at Augusta National as an amateur. He was just the third-ever Mexican-born player to compete in golf’s most prestigious tournament.

This week marks Ortiz’s second start on the All Pro Tour. Last week, the Guadalajara, Mexico, native played well out of the gate with a 9 under to lead the Supreme Lending Classic in Broken Arrow, Okla. He finished tied for 16th and earned $2,560.

“I actually played great golf,” Ortiz said. “I was a bit rusty mentally and made some silly mistakes. But it was good. That was great to get that feel again atop the leaderboard.”

This week, Ortiz opened play Wednesday at Bella Vista Country Club with a 1-under 71, then finished his second round on Thursday at 6 under to move to 7 under heading into today’s third round. Ortiz is tied for 31st with 11 other golfers.

Brax McCarthy fired a 10-under 62 Thursday to take a two-shot lead. Sam Stevens, who shared the first-round lead with two other golfers, shot a 66 Thursday and trails McCarthy by two shots at 15 under. Trey Mullinax, Derek Holland and Rob Hudson are all four shots back at 13 under. The men’s field was reduced after the second round.

On the Women’s All Pro Tour, which was played at Scotsdale Golf Course again Thursday, former Arkansas national champion Maria Fassi saw her big first-round lead shrink, but she still leads by two strokes after a 1-over 73. Fassi opened play Wednesday at 8 under.

Alex Pano is lurking two shots back at 5 under. Arkansas golfer Brooke Matthews, who is playing as an amateur, is 2 over for the tournament after shooting a 74 in the second round. Former Arkansas golfer Dylan Kim is 13 over after shooting a second-round 80. The women’s field, which moves to Bella Vista Country Club for the final two rounds, will be reduced after today’s third round.

Ortiz said the Bella Vista Country Club course sets up ideal for his game, which is strong wedge play from 130 yards in.

“The greens and around the green are tough and that is the strength of my game,” Ortiz said. “That’s the best part of my game, This course requires that. You have to hit it straight. You don’t hit a bunch of drivers, just put it in play.”

After this week, Ortiz said he will take a week off and return to Dallas. Looking ahead, he is hopeful to earn some Korn Ferry qualifiers and will rejoin the Latin America Tour if it restarts in August as planned.

“If the tour in Mexico restarts, that is where I will play,” he said. “If not, I will continue to play APT events. I plan to play in Texarkana, and I’m also hopeful of earning a spot in the Korn Ferry tournaments in San Antonio.”