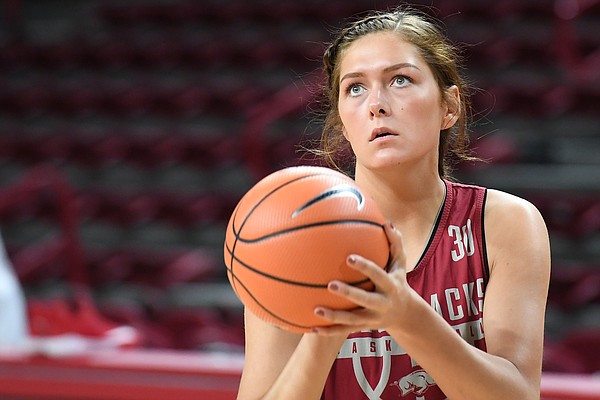 FAYETTEVILLE — Stillman Valley, Ill., is a small town of just more than 1,000 people, roughly two hours from downtown Chicago and a half-hour from the Wisconsin border.

And it's the hometown of a big personality: Razorback forward Macy Weaver.

"I'm very outgoing," Weaver said. "I just feel like I'm very friendly and easy-going and easy to talk to. I might be a little too outgoing sometimes, but, you know, it's better to be too than not at all I guess."

Weaver's journey from small-town Illinois to Northwest Arkansas is just a small part of the senior's ever-evolving story. She started playing competitive travel sports when she was 9 years old, but it wasn't on the hardwood.

"When she was younger it seemed like softball was kind of natural to her," Weaver's high school assistant softball and basketball coach Bob Mellon said. "It was an easier thing for her to play."

Weaver possessed two things that made her an ideal softball talent: A strong arm and a quick bat.

"She had probably one of the strongest arms that I've ever seen any softball player have, and I've coached a lot of girls," Mellon said.

He recalls a particular instance when Weaver showed off that arm strength. After chasing down a ball at the outfield fence, Weaver picked it up and fired it home on one bounce. Her strong arm also worked against her, though, as she had a hard time keeping a throwing partner.

This is the second in a multi-part series detailing the other sport(s) Arkansas athletes could have played collegiately.

"Not many girls wanted to play catch with her because she threw so hard," Mellon said. "Her father told me as a freshman that she was going to be a lot better softball player than a basketball player, and at the time I said, 'Yeah, you're right.'"

Weaver began her softball career behind the plate as a catcher, but by the time she was in high school her height had Mellon thinking she could play a different position.

Mellon's experiment didn't work out as well as he thought.

"We tried it and if you ever ask her she'll start laughing," Mellon said. "She was just all over the place, scaring girls because she couldn't throw it straight."

With pitching and catching no longer options, the coaching staff at Stillman Valley High School decided to move Weaver as far away from the plate as possible. Coaches liked her speed, so she moved to the outfield.

Weaver wouldn't spend much time in the outfield before she was moved again. This time she transitioned to first base.

"When you think about her arm, you think, 'Wow, you're wasting it,'" Mellon said. "But a 6-3 girl that can almost do a split (along with) her stretching and her glove skills, it helped us out big time."

Her strong arm wasn't the only upside to Weaver's softball skills. In her own words: "I hit dingers."

According to Mellon, Weaver batted .428 throughout her career and hit more than 40 home runs. She also led the team in triples in two of her four years at the school.

Weaver used a 34-inch, 32-ounce bat, but was still able to get around on balls. About the time Weaver's sophomore year rolled around she started to focus more on basketball.

"In seventh grade, I was very awkward," she said. "I mean, I'm still a little clumsy and stuff, but I (hadn't) grown into my body yet — if that makes sense — because I was just so tall."

After gaining coordination, Weaver began to put the time into becoming a great basketball player.

She joined an AAU basketball team while still playing summer softball and practicing her other sport, volleyball.

"I was wearing myself down," Weaver said. "But I'm just trying to make myself better."

Weaver's better play on the basketball court started to become apparent to Mellon.

"There was a stretch of time in the beginning of her junior season (when) we were playing some really talented schools, and she's playing against some big-time posts," he said, "and not only was she holding her own, but she started to dominate on some things."

Not long after that Weaver started to get some high-level Division I looks. Weaver committed to Wisconsin over Arkansas and Missouri during her junior year, but that didn't stop her from continuing to play softball and volleyball.

"Some people say, 'Hey, don't play any other sport. Just play basketball. Don't play softball because you could hurt yourself,'" Mellon said. "Not her. She was just like, 'I'm playing because I love it.'"

"Everybody would always ask me, 'Macy, what's your favorite sport?'" she said. "I don't have a favorite sport. I don't really know. I enjoy everything."

When asked if she could have gone on to play college softball the ever-humble Weaver simply replied: "Yes."

Because of her early commitment, softball coaches didn't offer Weaver, but her coach agrees with her. She could have gone on to play at a high level.

"Could she have gone somewhere? Could she get D-I looks in softball? Yeah, I think she could have," Mellon said. "But I think coaches were looking at (her interest in basketball) and saying, 'OK, there's no way we're going to get her for (softball).'"

Weaver has had multiple moments in her life when things haven't gone as planned. During Weaver's junior year one of her friends on the basketball team, Emily Sleming, died in a car crash.

"Probably one of the worst things we've ever experienced here," Mellon said. "She was one of those girls that wasn't the most popular, but at the same time she was always the one that stood up for the kids that were being bullied."

"I love Em. I loved her and how much of an impact she was on my life, especially during my basketball career," Weaver said. "And I know she's looking down on us, but I wish she was here. I just have to have faith and be content with what has happened, that God has a plan for all of us.

"She was just so funny. Her laugh was undeniably amazing. She was such a great person."

Later during Weaver's junior year, the same year she had committed to Wisconsin, Badgers head coach Bobbie Kelsey was fired.

Weaver reopened her recruitment and ultimately decided to play basketball at Arkansas.

"I actually have family that lives in Rogers," Weaver said. "So when I was being recruited I just thought this was a great opportunity to be close to family, and I'm a business supply chain major. With (the university) having the Sam Walton College of Business, it was just a no-brainer."

The UA's undergraduate supply chain management program was ranked best in the nation this week by Gartner.

Weaver played in 32 games as a freshman and sophomore before an injury ended her 2018-19 sophomore campaign early.

Weaver tore the ACL in her left leg last March, but before she was fully recovered from that injury she broke her right foot in September.

"It was really hard because I wasn't even cleared from my ACL yet," she said. "So I was about to be cleared and I broke my foot. I was on a scooter, wheeling myself around, on the opposite leg. Pushing off on my ACL leg while I had my right foot up while it was broken.

"I was a walking train wreck for a little bit. I wasn't even able to pass at practice, I wasn't able to do anything."

While Weaver was trying to recover from her injuries, Razorbacks senior guard Jailyn Mason injured her ankle and decided to have season-ending surgery to repair it. Both players sat out the 2019-20 season.

"She is such a joy to coach and be around," Arkansas coach Mike Neighbors said of Weaver. "She was vital to our team this year even though she didn't play one possession for us."

Weaver and Mason were already close friends before their injuries. The time away from the court brought them even closer.

"She had to drive me around," Weaver said. "We were both crippled at one point, so she was driving us around and we just looked like a mess. We would both get out (of the car), I would get the scooter out of the back and she would get her crutches out of the back seat. We just related so much.

"They were just like, "Wow, those girls. What happened to them?'"

When the season ended on March 12 due to the covid-19 pandemic, Weaver did not have anywhere to go.

"I have circumstances at home where my car wouldn't make it back home," Weaver said. "And also one of my family members was having surgery, so I didn't want to put them at risk."

Weaver's 2006 Pontiac Grand Prix wasn't likely to make the nearly-10-hour drive back to Stillman Valley, so Mason invited Weaver to come with her to Nashville, Tenn. Weaver and Mason helped each other with schoolwork, kept each other motivated and even taught each other some new basketball moves.

"(I've been) trying to show Jay some more post moves," Weaver said. "Trying to get her tough inside. She's teaching me a lot. We're working on a lot and just trying to get ready for the next season."

After a month and a half in Nashville, Weaver traveled back to Fayetteville before continuing on to Austin, Texas, to stay with family and friends.

As hard as these past few years have been, Weaver hasn't let it change her attitude or work ethic.

"She was always fun," Mellon said. "Most of the girls wanted to be around her because she was fun to be around. One thing you will always get with her is she'll work the hardest."