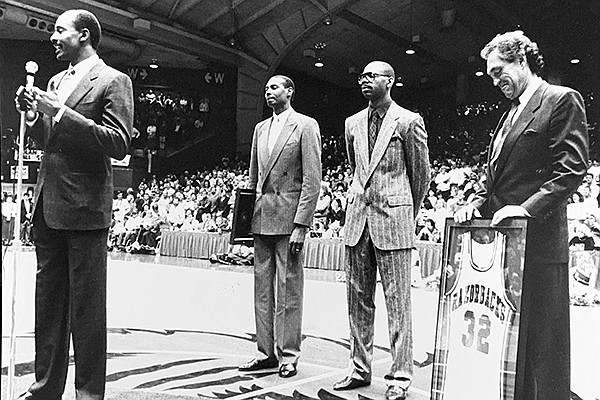 Sidney Moncrief (front) speaks to the Barnhill Arena crowd while Marvin Delph (left), Ron Brewer (center) and Eddie Sutton listen behind him on March 3, 1990, in Fayetteville.

FAYETTEVILLE -- A documentary film on the life of Eddie Sutton, who first rose to national prominence as a college basketball coach at the University of Arkansas, has been four years in the making.

But the wait to watch it won't be much longer.

The 93-minute film simply titled EDDIE will make its debut at 8 p.m. Monday on ESPN, the network announced Thursday.

"Our team is super excited about it and just very grateful and honored that ESPN saw value in the movie and decided to put it on their network," Christopher Hunt, the film's director and a co-producer, said on Thursday. "It's really a dream come true."

The first steps of making the film, Hunt said, were in the summer of 2016. The film's producers include Hunt and business partner David Tester -- whose company is 1577 Production -- along with Wendy Garrett in association with Takashi Entertainment, which helped sell the project to ESPN.

"It's an incredible look at my Dad's life, his success and his struggles," Oklahoma State assistant coach Scott Sutton, who is Eddie Sutton's son, said in a Twitter post about the film. "Chris Hunt and his team put their hearts into producing and releasing this show. Hope you guys enjoy it."

Eddie Sutton, who died May 23 at age 84, was elected to the Naismith Memorial Basketball Hall of Fame on April 3. He had an 806-236 record in 37 seasons as an NCAA Division I head coach at Creighton, Arkansas, Kentucky, Oklahoma State and the University of San Francisco.

In 11 seasons at Arkansas from 1974-75 through 1984-85, Sutton had a 260-75 record and nine NCAA Tournament appearances, highlighted by the 1978 Final Four. He also coached five first-round NBA Draft picks with the Razorbacks, including Sidney Moncrief, the No. 5 overall selection in 1979.

Moncrief along with fellow "Triplets" Ron Brewer and Marvin Delph -- the nickname for the three 6-4 stars of the 1978 Razorbacks -- were interviewed for EDDIE in February of 2018 on the Walton Arena court.

"The reality is, Coach Sutton's years at Arkansas were his most successful years," Moncrief said Thursday. "He coached so many players who had substantial NBA careers, and he had the most impact on our state than he did anywhere he coached.

"If you're really honest about it, when you think about Eddie Sutton, you should think Arkansas first because of all the things he accomplished at Arkansas."

The film not only chronicles Sutton's many coaching highlights but also his struggles with alcoholism.

"Coach Sutton is not the first person to deal with alcoholism, and he won't be the last," said Darrell Walker, the University of Arkansas at Little Rock coach who was an All-America guard for Sutton with the Razorbacks. "It's happened to members in my family. No person is immune to it.

"Alcoholism is a disease. Does that make Coach Sutton a bad person? Absolutely not. That just means Coach had a problem.

"Coach was honest about his situation as he got older in life and he knew he had made some mistakes. But I think when you see this film on his life, it's going to really make you respect him even more as a person as well as a basketball coach."

ESPN has licensed EDDIE through August, so expect to see the film shown several times on the company's various networks. After the ESPN broadcasts, the film is expected to be available for rental.

"We are still working out those details and hope to have a very exciting announcement in the coming days," Garrett said in an email, "making the film available to a world-wide audience on a long-term basis. "