Jonesboro pitcher commits to Razorbacks day after striking out 13 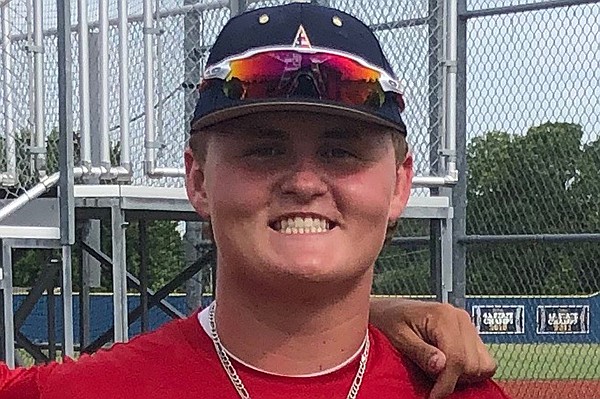 Photo by Courtesy of Josh Hyneman

Jonesboro pitcher Josh Hyneman is committed to the Razorbacks' class of 2022.

Hyneman (6-4, 250 pounds) made the decision one day after receiving an offer from Razorbacks pitching coach Matt Hobbs. The offer followed an outing in which Hyneman struck out 13 in five innings for the Arkansas Sticks at the Perfect Game WWBA 15-Under National Championship in Atlanta.

“I had been in touch with Arkansas since January (2019) and we had kind of been in communication throughout that time,” Hyneman said, “but I think yesterday’s performance probably made a big jump.

“It felt great to be up there and be dominant. It had been awhile since I had started a game.”

Hyneman, who will graduate from Jonesboro High School in the class of 2022, tore his meniscus in February. He was unable to pitch for Jonesboro before the season was canceled due to the covid-19 pandemic in March. He was cleared to return the day the season was called off.

With the Sticks, Hyneman has been used primarily as a relief pitcher because of how hard he throws. Sticks coach Chase Brewster said his fastball has been clocked at 88 mph, and he also throws a slider and changeup.

“He’s just kind of been a workhorse on the mound the last two summers,” said Brewster, who added that Hyneman also plays first base and leads his team in home runs. “He was their closer as a freshman, and now he’s starting to move into a starting role as a sophomore. He’s one of those kids that it seems like the more he throws, the better he gets.

“It’s still…a power reliever mindset of mostly fastballs, and a curveball when he needs it. It’s mostly shutdown, out of the bullpen, if you’ve got a two-run lead you know the game is over when he comes in.”

In addition to Arkansas, Hyneman had been recruited by Ole Miss, Indiana, Louisiana-Lafayette, Wichita State and Arkansas State.

He is the grandson of Ben Hyneman, the former chairman of the University of Arkansas board of trustees. His father, Matt, also attended the UA.

“We’ve always just kind of been tied in to the Razorbacks and always been a Razorback family,” Josh Hyneman said. “We get together and watch football, baseball, basketball. We’re just big Razorback fans.

“We’ve gone to Omaha twice to watch them play (in the College World Series) and they always perform well. It’s just hard to pass up on a great school that was probably my top school throughout my recruitment process.”

Hyneman also plays offensive line for the football team at Jonesboro. He was the Hurricane’s starting center for the last half of the 2019 season after the starter tore his ACL, and said he expects to play tackle, center or guard this year.

Playing on the offensive line “has been a struggle” as a pitcher, he said, because of the need to keep weight on.

“You can’t get too low without the football coaches getting a little bit concerned,” Hyneman said.

“I definitely think football has been good for me, staying agile on my feet and being able to work out and get stronger.”

Hyneman is the 10th player to publicly commit to the Razorbacks’ 2022 class, and the sixth player from the state of Arkansas. Other committed players include outfielder/right-handed pitcher Cooper Dossett of Springdale Har-Ber, third baseman Colton Sims of Russellville, shortstop Easton Swofford of South Side Bee Branch, right-handed pitcher Austin Jobe of El Dorado and left-handed pitcher Jordan Huskey of Greenbrier.