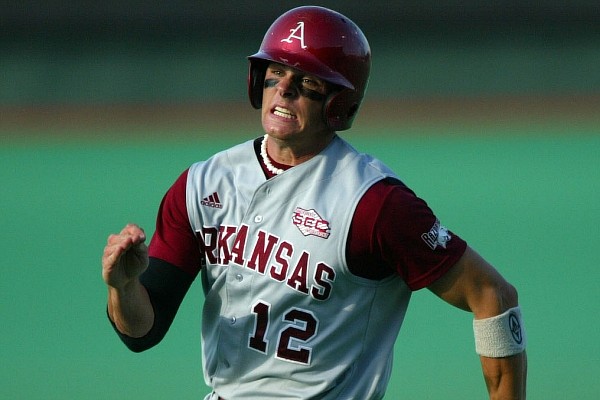 Arkansas' Craig Gentry runs toward home plate to score against the University of Texas Saturday night in the second round of the NCAA Baseball Austin Regional. Gentry was a four-sport standout at Fort Smith Christian from 2000 to 2002 and was a member of five state championship teams in three different sports in high school.

Craig Gentry was never one to focus on a single sport, instead choosing to flow from one season to the next. And he excelled in all of them at Fort Smith Christian School.

CREDENTIALS Was a four-sport standout at what was Fort Smith Christian and now Fort Smith Union Christian from 2000 to 2002. … Was a standout on five state championship teams in three different sports in high school including three state titles in track, a state golf title and a state baseball title as a senior. … Batted over .700 and was 6-1 as a pitcher in baseball. … Signed with Westark College (now Arkansas-Fort Smith) and earned all-conference honors. … Started in the outfield and was an All-SEC selection at the University of Arkansas. … Was drafted in the 10th round of the 2006 Major League Baseball Draft by the Texas Rangers. … Spent 10 seasons in the major leagues and helped the Rangers to back-to-back World Series appearances in 2009 and 2010. … Was the Rangers’ 2012 Rookie of te Year. … Retired from Major League Baseball in 2019.

THAT’S WHAT HE SAID “With Craig, there wasn’t anything he couldn’t do,” said former Arkansas-Fort Smith baseball coach Dale Harpenau. “You could put a basketball in his hand, he could go dunk it. You could put a golf club in his hand and he’d probably go out and play scratch golf. He just had so much athleticism.”

"With Craig, there wasn't anything he couldn't do," said former Arkansas-Fort Smith baseball coach Dale Harpenau. "You could put a basketball in his hand, he could go dunk it. You could put a golf club in his hand and he'd probably go out and play scratch golf. He just had so much athleticism. You just knew that whatever sport he decided to focus on, he was going to excel at it."

Although Gentry, now 36, admits his passion was always basketball, he knew that baseball was probably his best path to his ultimate goal, to play at the University of Arkansas.

"I always wanted to be a Razorback," Gentry said. "That's where I wanted to be and I was fortunate to get to play there for two years. Baseball was the best option."

After Gentry led Fort Smith Christian to the state title in 2002 by batting over .700 with a 6-1 record on the mound just three days after winning a track title, he did not have a lot of offers. Westark College was a junior college program at the time, and the Lions were able to sign him. He also considered a basketball offer from John Brown University.

"Back then there wasn't travel ball and there weren't a lot of guys that even knew about Craig Gentry coming out of high school," Harpenau said. "We were very fortunate to have him here with us at Westark then. He was just one of those guys that by end of his sophomore year, he had grown leaps and bounds.

At Arkansas, Gentry worked himself into one of the best outfielders in the country, using his gift of speed to cover vast amounts of Baum Stadium grass as a run-preventer. Offensively, he was a .300 hitter and one of the most prolific base-stealers in the SEC for two seasons.

Gentry was drafted by the San Francisco Giants after his first season at Arkansas but chose to return to school for his senior season. He bettered his draft stock and was taken in the 10th round by the Texas Rangers in the 2006 MLB Draft.

He spent 10 seasons in the major leagues with four teams. He played in back-to-back World Series with the Rangers in 2009 and 2010 and enjoyed his best season in 2012, where he batted .304 and was named the club's Rookie of the Year.

Gentry played with three other clubs over his career including Oakland, Baltimore and with the Los Angeles Angels before retiring from the game in 2019. He battled through some injuries including concussions that limited him to just a handful of games over two seasons.

Leaving the game was not a difficult decision, he said.

"My career was such a grind," Gentry said. "It was such a tough road, never having a guaranteed contract or a multi-year contract. So it just always seemed like every day I was looking over my shoulder or wondering if that was the day I was going to get sent down. Over the course of 10-plus years, that stress can add up.

"So it was a very stressful time for me. Don't get me wrong, I really enjoyed it thoroughly and I'm grateful for all of that experience, but at the same time, it was very stressful. It's been tough just to get away from the actual playing the game, but also it's been a relief from the stress aspect of it."

Gentry, who has been married since 2013 and has a young daughter, is embarking on a new career in finance as a commercial lender near his home in the Dallas-Fort Worth area. He said he is excited about this new chapter in his life away from the field.

He still reflects back to his days as a prep star in Fort Smith, particularly his senior year and the magical run to a pair of state titles. The baseball season started with the Class 1A Eagles winning a big tournament against Bentonville, which went on to win the state title in the state's largest classification.

On the Friday night before the state baseball title game on Saturday morning, he attended his senior prom, then after the Eagles' 2-1 victory in which he earned the win, allowing four hits over five innings with nine strikeouts, he jumped on a bus for his senior trip.

"I still call that the greatest week of my life," he said almost 20 years later. "That was a crazy time. I remember after the baseball game that night after running in the state meet earlier that day, I had the worse cramping of my life. But it was amazing and just such a blast."