As a pitcher, Lunney turned his wildness into success 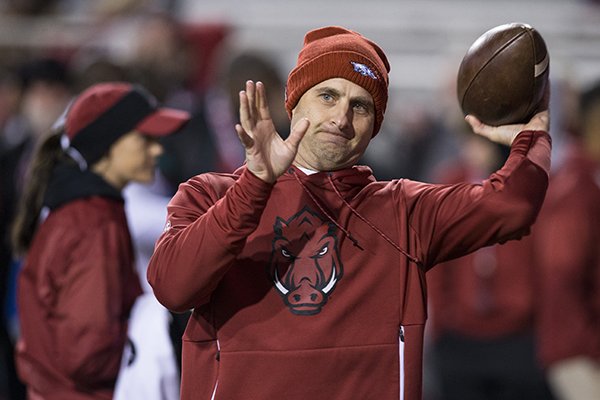 Barry Lunney Jr. considered himself to be “effectively wild” while he pitched at Fort Smith Southside from 1990-92.

That might have been a blessing in disguise at a time when high school baseball was relatively new in Fort Smith, and Lunney had just started attending Southside before his sophomore year — the same year the Rebels had their first baseball team.

CREDENTIALS Was named the Arkansas player of the year by Gatorade in 1992, just months after he earned the same award in football. … Went 6-1 with a 1.63 ERA and hit .459 with 4 home runs and 28 RBI for Southside his senior season. … Earned a state tournament victory over Wynne as a sophomore in 1990, Southside’s first year of fielding a baseball team. … Was drafted by the Montreal Expos out of high school in 1992 and by the Minnesota Twins in 1996. … Played a year in the Twins organization before opting to be a football coach, including stints at Bentonville and at Arkansas. … Currently the offensive coordinator at Texas-San Antonio.

“Even at my best, I always struggled with my control up until the latter part of my career,” Lunney said. “I don’t know if I was a power pitcher as a lefty. I was throwing in the upper 80s at that part of my career, but it was David Allen who helped me with my breaking ball, which was the pitch I was known for. It was like a 12-6 curveball that had some good break on it.

“I just went out there and pitched, and that’s probably why I struggled at times like I did. I really didn’t have anybody to look to in that regard, but I just loved having the ball in my hands. I liked pitching because it was like playing quarterback, and you could control the game a little bit.”

Though high school baseball was new at the time in Fort Smith, Lunney said the quality of play was still there because of the tradition the Kerwins American Legion program had built. Lunney said Northside’s teams in those days made for “a lot of tough outs,” and some of his tougher games were either against Northside or Russellville.

It also didn’t help that Southside’s home games were being played at Hunts Park, where the football bleachers provided hitters with a 290-foot home run to center field. Lunney even said he tried to aim for the short distance whenever possible.

“I put a few into the bleachers,” Lunney said. “I tried to put them all in the bleachers. You knew if you could hit a line drive up the middle, you would get a home run. There were a lot of attempts — more in the summer than in the spring because you only played about 15-20 games in high school back then.

“There weren’t a lot of traditional big fields there in Fort Smith. Van Buren’s field was pretty small at that time, too. It was out there by the lake, and in right field that wasn’t a very big porch.”

One of Lunney’s favorite high school memories was being the winning pitcher as a sophomore when Southside defeated Wynne in the 1990 state tournament. He didn’t stop blossoming as a pitcher until the following year while he was pitching for Kerwins and working with Allen.

It was that summer when Lunney pitched in the American Legion Southwest Regional tournament in Woodward, Okla., when his performance caught the eye of then-Arkansas coach Norm DeBriyn, who was there recruiting Dan Wright at the time.

“Barry had a very big performance that day,” DeBriyn said. “He threw outstanding. His velocity topped out at 92, and he was throwing 88-91 consistently with a good breaking ball. He could also hit the ball. I loved to have a prospect like that.

“But what caught my attention was his demeanor on the mound. It was so good. He exuded confidence out there, and it was something to watch.”

Lunney had an outstanding senior season as he compiled a 6-1 season with a 1.63 ERA on the mound, and he hit .459 with four home runs and 28 RBIs. Southside, however, didn’t make the state tournament that year as the Rebels lost to Van Buren in the district tournament — a game that Lunney didn’t pitch but played right field, instead.

His performance was enough to be named the Arkansas player of the year by Gatorade, just a few months after getting the same award in football after leading Southside to the Class AAAA state title in the fall. Lunney, however, thought the award should have gone to Watson Chapel’s Richie Workman, who later became his teammate at Arkansas.

“I think Richie and I had similar stats that year,” Lunney said. “But his team reached the state championship that year. Richie was really good — a crafty lefty. I anticipated him winning in baseball since I won in football, but I was pleasantly surprised. And to be honest with you, it’s something I am really proud of.”

Lunney then went on to Arkansas and played football and baseball, although he was drafted by the Montreal Expos following high school. He was drafted again by the Minnesota Twins in 1996 and played a year in that team’s organization before becoming a football coach.

DeBriyn, meanwhile, understood the route Lunney took through college, but still wonders what it would have been like if Lunney would have turned his attention to strictly baseball.

“In my opinion, if Barry had chosen to stay in baseball, he would have made it to the big leagues,” DeBriyn said. “And he would have been there for years. I know a lot of clubs usually back off when a player decides to go the college route. Barry, however, was definitely a prospect.

“Barry was not only an outstanding athlete, but he’s an outstanding person. I see the way he helps out kids. He has that personality that young people are attracted to him and love to be around him.”