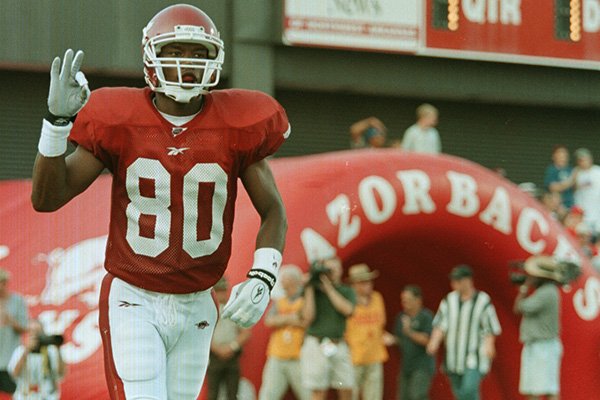 Arkansas receiver Anthony Lucas reacts after scoring a touchdown during a game against Southwestern Louisiana on Saturday, Sept. 5, 1998, at Razorback Stadium in Fayetteville.

The first in a series profiling inductees into the Arkansas Sports Hall of Fame Class of 2020.

FAYETTEVILLE -- Anthony Lucas clearly had the statistics and credentials to merit his enshrinement in the Arkansas Sports Hall of Fame this month.

The former star receiver for the University of Arkansas had a big moment in time, a touchstone for fans to recall memories of his immense talent in a flash.

Lucas caught the game-winning pass, a 23-yard touchdown strike from Clint Stoerner with 3:44 remaining, to give the Razorbacks a 28-24 victory over No. 3 Tennessee on Nov. 13, 1999, at Reynolds Razorback Stadium.

The irony of the final score, the exact score from the previous year when Tennessee rallied behind a late Stoerner fumble to overcome the Hogs en route to the first BCS national championship, was not lost on anyone.

"I get that a lot," said Lucas, regarding fans asking him about the touchdown that gave Tennessee a measure of payback. "I really do. That's part of it, and I love that people still remember it and we're able to talk about it.

"What I remember most about that whole game is I think about the year before that in 1998, when we should have beaten Tennessee. So we sit there the entire year just thinking about that game and couldn't wait to get back and play Tennessee again. Once we got to that game, it was very, very personal. I was so happy for Clint that we were able to come back and redeem ourselves a year later with the exact same score."

Lucas and the Class of 2020 will be inducted March 13 at the Statehouse Convention Center in Little Rock.

Lucas, a native of Tallulah, La., was a standout pass catcher who straddled two eras: the end of the run-heavy Danny Ford system and the start of the Houston Nutt era with a more-balanced offense. His 2,879 career receiving yards stood as the school record for 12 years until the Bobby Petrino years spawned homegrown talent in Jarius Wright, Joe Adams and Cobi Hamilton.

Receivers coach Fitz Hill was the lead recruiter for Lucas under Ford, and he stayed on board for Nutt's arrival. He stayed with Lucas as he worked to gain academic eligibility to play as a freshman while always believing in the 6-3 standout's talent.

Marvin Caston, a district rival of Lucas' at Winnsboro, La., who signed at Arkansas in the same class, remembers Lucas as a premier competitor who delivered in the clutch.

"He made big plays after big plays," Caston said. "That's the thing that sticks out to me the most. When it was on the line and you needed a big play made -- whether it was high school or college -- he made the big play, man."

"I've never seen a better deep-ball catcher," Nutt said. "What I mean by that is when the ball was in the air and he could be surrounded by a safety or a corner, the laser focus he had for the deep ball was just outstanding."

Lucas said a former high school teammate, Jimmy Harris, helped him hone the ability to focus in the midst of traffic.

"Jimmy would have a drill where he would just throw the ball up in the air as high as he could, and I would have to make an adjustment to the ball coming down," Lucas said. "And I think those little things right there really helped me. That's why I think I was so good at catching the deep ball, because I learned to not focus on the things around me when the ball was in the air.

"I just focused on the football. Whatever else happened, I could care less. This is my ball. That's the attitude I took into college, and that's the way I played."

Current wide receivers coach at Class 5A powerhouse Pulaski Academy and head coach of the junior high team. … Star basketball and football player at Tallulah (La.) McCall High School who signed with Arkansas over offers from UNLV and Louisiana Tech. … Freshman All-SEC selection in 1995 with a then-Arkansas freshman record 27 receptions for 526 yards and 4 TDs. … Had 43 catches for 1,004 yards and 10 TDs in 1998 to earn second-team All-SEC honors as the first Razorback with 1,000 receiving yards in a season. … Led the country with 23.3 yards per catch in 1998. … A first-team All-SEC pick in 1999 with 37 catches for 822 yards and 5 touchdowns. … Caught game-winning 23-yard touchdown pass from Clint Stoerner to down No. 3 Tennessee 28-24 in 1999. … Named to the Razorbacks’ All-Decade team of the 1990s. … Inducted into the UA Sports Hall of Honor in 2019. … Taken in 2000 NFL Draft by the Green Bay Packers and spent three years in the league with Green Bay and Dallas before knee injuries forced him to retire.

Lucas popped on the SEC scene early, earning freshman All-SEC honors in 1995 when he caught a then-Arkansas freshman record 27 passes for 526 yards and 4 touchdowns. He not only helped Arkansas claim its first SEC West title that season, he also had a major contribution in the Razorbacks' game-winning drive in a 20-19 victory at Alabama that is best remembered for J.J. Meadors' 3-yard touchdown pass with six seconds remaining.

On a fourth and 8 from the Arkansas 45, Lucas caught a short pass from Barry Lunney Jr. and turned it into a 31-yard gain to the Crimson Tide 24.

"J.J. and [Michael] Eubanks, they were the go-to guys, of course," Lucas said. "I remember that play was a big fourth down ... and Barry's looking to Eubanks' side, and I'm just over there doing jumping jacks and waving, like 'Throw me the ball.' He gets pressure and gets flushed out to his right ... and he threw the ball over to me.

"It was so shocking to me that when I caught the football, I made a move and picked up a few yards, but I was so wide open I tripped over my own feet and fell down. I could have run for more yards, but we got the first down and kept the drive moving."

Said Caston: "I know J.J.'s catch gets the most attention, but there was that crucial fourth-down conversion we had to make. Lunney to Lucas. I mean, he hit it. J.J.'s catch is the one that made the difference, but ultimately if [Lucas] doesn't make that play then we don't ever get to that point."

Lucas' best season opened with a big bang in the season opener against SMU. Hill had watched lots of tape on the Mustangs and determined they would be playing soft man coverage on the corners.

"Coach Fitz said, 'You guys need to see this.' He said if we caught a hitch route, a 5- or 6-yard route, we'd have the opportunity to possibly score," Lucas said. "All week that just stayed in my head.

"That was so exciting. Little Rock was rocking. I mean it just felt like an earthquake had hit that stadium. I remember that just like it was yesterday."

Said Hill: "I said this is what's going to happen: We're going to throw a hitch. I want you to make a move outside. He's going to bite, and you're going to go all the way. That's exactly what happened.

Lucas made many magnificent plays, but the touchdown against Tennessee has a life of its own.

"Certainly when you do that and you look at the trajectory that play had on the program, the stadium was renovated after that season," Caston said. "He was certainly a large part of that."

"Anthony continued to help me recruit," Hill said. "Anthony's not a selfish guy. That's the thing I think I would want everyone to know. When Boo came in as the No. 1 juco receiver, Anthony could have alienated himself against Boo, and I have seen that happen before. But he wanted Boo there.

Lucas returned to Northwest Arkansas to earn his master's degree after a three-year stint in the NFL with the Packers and Cowboys, which was shortened by knee problems. He worked with Hill's Life Champs youth program in Little Rock before getting into coaching.

"Arkansas embraced him, and he never left," Hill said.

Lucas has settled with his wife and family in Little Rock, where he is wide receivers coach at Pulaski Academy and head coach of the junior high team. He would like to move up in the ranks and land a head coaching job or possibly transition into college coaching.

Anthony Lucas caught 23 touchdown passes in his career at the University of Arkansas. He had a career-best 10 touchdown recep... + Enlarge

"We love Central Arkansas," Lucas said. "We love Little Rock. It's truly been a blessing being here in Little Rock.

"When I played you would always hear about the passion in Central Arkansas for the Razorbacks, and I tell you it is so true. People are so passionate about Razorback football. Well, Razorback sports in general but especially football. Little Rock is great. I built a home here. I love it." 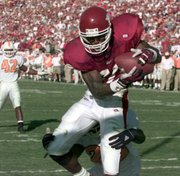