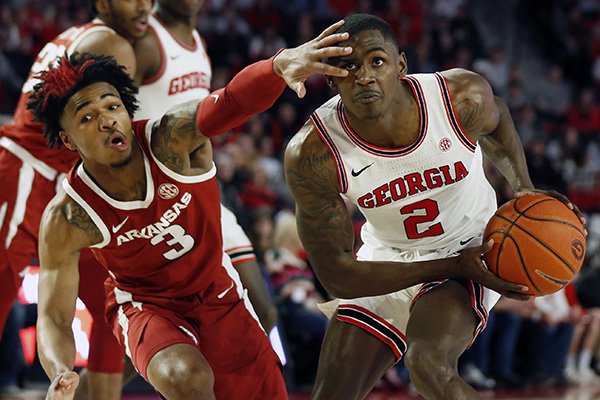 ATHENS, Ga. -- The timing was very bad for one of the worst defensive performances of the season for the University of Arkansas.

The Razorbacks' 99-89 loss at Georgia on Saturday came with one week remaining in the regular season to cap a 2-6 stretch. The NCAA selection committee, which is charged with reviewing and parsing the analytics, will see a 10-point loss to a team slotted at 84 in Sunday's NET rankings.

Arkansas had been 41 in the rankings and included in the NCAA Tournament projections of some prominent analysts heading into the game. The Hogs fell to 46 after giving up their highest point total of the year by 13 points, and likely on the wrong side of the tournament bubble in today's updates.

Coach Eric Musselman and the Razorbacks maintained hope for the limited games to come -- at home against LSU on Wednesday and at Texas A&M on Saturday to close the regular season -- and the possibility of finishing strong.

"We've still got two conference games left, and hopefully we can make a run in the SEC Tournament because we all know where we want to go," guard Isaiah Joe said.

Joe's three-week absence -- plus the TCU game previously -- while dealing with a knee injury, surgery and recovery is a monster X-factor for the committee to consider while debating Arkansas' merits for inclusion in the 68-team field.

"We're going to bounce back," said guard Desi Sills, who scored a career-high 21 points against the Bulldogs.

Sills considered the LSU game a critical opportunity for the Hogs.

"It's big and important," he said. "LSU is one of the top five in the conference, and we've got them at home. We've all got to be there, and we've got to buy in and hope we come out with the win."

Said Joe: "We lost to them at their place, so it's a revenge game at our place. We've got to come ready to play.

"We know what they can do and they know what we can do, so we've just got to adjust accordingly. We have to come with intensity and have a nose for the game. We have to play with a chip on our shoulder."

Musselman, pointing out the Razorbacks' recent horrid road starts, said early aggression and intensity against the Tigers is key.

"We've got to try to figure out how to play with more intensity against LSU," he said. "They annihilated us on the backboards. We played really good defense, but they just went and chased their own [misses], so we've got to play with toughness on the glass for sure against LSU or it's not going to be pretty."

Georgia outrebounded Arkansas 40-29 for the Razorbacks' 14th rebounding deficit of minus-10 or more on the season.

The case could be made the Razorbacks had their worst defensive showing.

Georgia made 56.7% of its shots, the second-highest percentage for an Arkansas opponent this season after 58.8% by Mississippi State in its 78-77 victory Feb. 15. Georgia's 10-of-23 shooting from three-point range, 43.5% accuracy, was the best by a Razorback opponent and only the second time an opponent managed to hit better than 37.5% against the nation's top three-point defense.

Rayshaun Hammonds made 3 of 4 three-pointers, while Tyree Crump cashed in 4 of 6 and Anthony Edwards went 3 of 6 to account for all of Georgia's makes.

"We knew Hammonds could shoot the ball," Musselman said. "I just thought our contesting of the three was not as good as it has been.

"Then late game, I mean anybody who scouts or watches games knows that Crump can shoot the ball. We just weren't close enough. We're No. 1 in the nation at defending the three, and we didn't get to guys as quick as we possibly could."

The Razorbacks' front-court players had minimal impact on the outcome, other than the negativity of foul trouble and the big rebounding differential.

Adrio Bailey, Ethan Henderson and Reggie Chaney combined for 6 points, 4 rebounds, 2 blocks and 9 fouls in 29 combined minutes. Henderson and Chaney didn't score or get a rebound.

When the Razorbacks went with five guards, Georgia isolated Hammonds on Jalen Harris or others and generally scored.

But Arkansas outscored the Bulldogs by seven points with Harris in the game, two points with Bailey in and broke even when Mason Jones was on the court. Everyone else had a substantially negative plus-minus rating.

Arkansas couldn't have played Georgia at a worse time when viewed in the arc of the Bulldogs' season. Up to a couple of weeks ago, the struggling Bulldogs were blowing big leads left and right. On Saturday, they were at near-peak offensive efficiency and equipped to fight off and rebut three significant Arkansas runs in the second half.

Joe and Jones scored 26 points each, and Sills added 21 to account for 82% of the Hogs' scoring.

Jones did not finish the game after a spectacular second half due to cramping issues. His driving ability, shooting and calming presence in the half-court offense will be much needed against LSU on Wednesday.