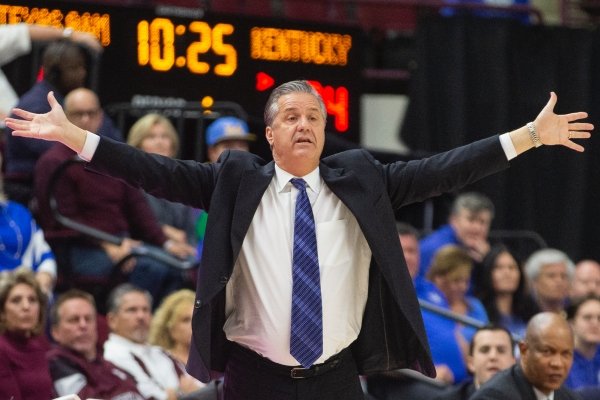 FAYETTEVILLE -- Kentucky Coach John Calipari hardly addressed the Wildcats' clinching their 49th SEC regular-season championship during his postgame remarks after a 73-66 victory over Auburn at Rupp Arena on Saturday.

When a reporter tried to ask Calipari about the shape of Kentucky's season, considering the Wildcats' 67-64 loss at Rupp Arena on Nov. 12 to Evansville and a pair of losses during a December event in Las Vegas, the coach continually interrupted.

"Did we play anybody else? How can they be any good, they lost to Evansville?"

Calipari talked about not having E.J. Montgomery available in the loss to Evansville and having two players -- Ashton Hagans and Nick Richards -- slowed by the flu in that game.

"I told them after, I never stopped believing in this group," said Calipari, finally addressing the bigger picture. "I knew we'd be fine. I knew we'd be a team that was playing in March.

Calipari also discussed how playing in a physical game as Kentucky did against Auburn will benefit his team.

"When you were coming off a screen or driving, it wasn't like a clear lane. We proved to us that in that kind of game where it's, 'We're letting it go,' that we can perform."

Arkansas guard Mason Jones, who surpassed the 1,000-point mark last week, became the third player in SEC history to earn four SEC player of the week honors in the same season on Monday. Jones averaged 31.5 points per game as the Razorbacks split two games against Tennessee and Georgia.

The SEC's top bubble teams of Mississippi State, Arkansas, Alabama and South Carolina are currently on the wrong side of the bubble.

CBSSports.com's Jerry Palm lists both Arkansas and Mississippi State among his first four teams out of the bracket. He has these seeds for SEC teams: 3 Kentucky, 5 Auburn, 9 Florida and 9 LSU.

ESPN.com's Joe Lunardi has these seeds for SEC teams: 3 Kentucky, 5 Auburn, 8 LSU and 9 Florida. He lists Mississippi State among his first four teams out of the field, and South Carolina among his next four out.

USA Today has the four SEC teams projected as 3 seed Kentucky, 4 Auburn, 8 LSU and 11 Florida, with Mississippi State among the first four teams out.

A handful of candidates, mostly from teams in the upper echelon of the SEC, are potential league MVPs and all-SEC possibilities heading into the final week of the season.

The group includes big scorers such as Arkansas guard Mason Jones, Georgia guard Anthony Edwards and Ole Miss guard Breein Tyree, but that trio has to overcome finishing in the bottom half of the SEC race.

Jones leads the SEC in scoring at 21.3 ppg, with Tyree second (20.1) and Edwards third (19.8). Edwards was the lone SEC representative among the 20 finalists for the Wooden Award released a few weeks ago.

"I don't think you can look past what Mason Jones has done," former Ole Miss coach Andy Kennedy said on the SEC Network on Saturday. "Mason Jones has been incredible, fighting Arkansas through a lot of adversity throughout the course of the season."

Former Auburn standout Daymeon Fishback distilled his candidates to one.

"Let's be candid," Fishback said on the SEC Network. "You win the league championship and you are the leading scorer on that team, one of the more efficient players ... it's Immanuel Quickley."

Quickley averages 16.3 points and an SEC-best 92.2% rate on free-throw shooting.

Kentucky has clinched the SEC regular-season crown and the top seed for the conference tourney in Nashville, Tenn., while Auburn and LSU, both 11-5 in league play, are in prime position to claim two other double byes. Florida and Mississippi State, both 10-6, and South Carolina (9-7) are the only other contenders to miss the first two rounds in Nashville and start their postseasons on March 13.

Mississippi State, winners of seven of its past 10 games, holds the head-to-head edge over Florida based on a 78-71 victory in Gainesville, Fla., on Jan. 28.

The Bulldogs finish by traveling to South Carolina tonight and hosting Ole Miss on Saturday. The Gators travel to resurgent Georgia on Wednesday before hosting Kentucky in the season finale.

On the flip side is the battle to stay out of the SEC Tournament's opening round March 11, when the bottom four teams play to get into the 12-team bracket.

Vanderbilt (1-15 SEC record) has clinched the bottom spot, while Georgia and Ole Miss (both 5-11) are on the brink, with Arkansas and Missouri (6-10) a step ahead. Missouri holds a head-to-head tiebreaker over the Hogs right now due to a win over Auburn.

Georgia and South Carolina have played 116 times in men's basketball, and neither team holds an advantage in the series.

The Gamecocks' 94-90 victory at Colonial Life Arena in Columbia, S.C., on Wednesday knotted the series at 58-58. That is the Bulldogs' only loss in their past four games.

Auburn Coach Bruce Pearl on Saturday attended the 25-year reunion of the Southern Indiana team he led to the 1995 Division II championship.

The Screaming Eagles, based in Evansville, Ind., rallied from a 30-8 deficit to down California-Riverside 71-63 in Louisville, Ky., to cut down the nets at the Division II championship game.

Pearl was a third-year head coach at the time and his son Steven, now an Auburn assistant, was the team's ball boy.

The NCAA instituted last year a new rating system called the NET rankings, which took the place of the Ratings Percentage Index. An acronym for NCAA Evaluation Tool, the NET rankings take into account game results, strength of schedule, game location, scoring margin, net offensive and defensive efficiency, and the quality of wins and losses.

The Gamecocks are desperately in need of a win at Colonial Life Arena in a bid to earn a double bye for the SEC Tournament. Mississippi State would put itself on the brink of clinching the final double bye with a victory in a rematch from two weeks ago. The Bulldogs won that game 79-76 at Humphrey Coliseum in Starkville, Miss.

"We're obviously disappointed. Didn't shoot as well in the second half as we did in the first half, and Kentucky played really well defensively. You've got to make shots, and you've got to defend without fouling." -- Auburn Coach Bruce Pearl after Saturday's 73-66 loss at Kentucky

"I thought Tyson Carter again was magical down the stretch. You go back and look at our team at Arkansas, he was unbelievable. The end of the game against South Carolina at home, he was great. Again today, putting the ball in his hands and letting him make plays down the stretch." -- Mississippi State Coach Ben Howland on Saturday

Second-half shooting percentage for Auburn in its loss at Kentucky