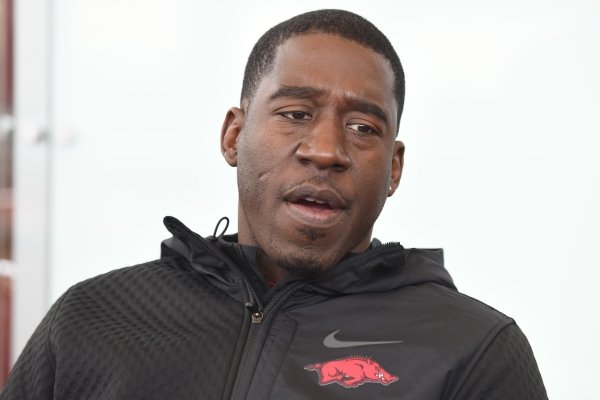 He calls the Razorbacks one of his top priorities.

"Just because of the coaching staff and the environment," Ball said. "When Coach Pittman was at Georgia, he was recruiting me. Now that he's the head coach at Arkansas, he has taken his interest in me with him. That's cool."

He and Pittman have been talking about him taking an unofficial visit to Fayetteville.

"He wants to get me up for a visit," Ball said. "I'm planning to take a visit soon, and if I feel like that's a place I want to spend one of my officials on, then I'll make it happen."

Smith recruited Ball while at Georgia State before joining the Arkansas staff.

"He was recruiting me at Georgia State. He went on to bigger and better at Arkansas, and he took me with him, too," Ball said. "We have a nice relaltionship. He knows what it's like to come where I come from. He totally understands almost everything about me."

Ball played on both sides of the ball for the Bulldogs. A starter on varsity since the ninth grade, he recorded 57 tackles, 6 sacks, 8 quarterback hurries, 3 forced fumbles and a recorded fumble as a junior while also having 28 pancake blocks on the offensive line.

In addition to Arkansas, Ball wants to visit ACC and other SEC schools that are showing interest in him.

When he narrows his list of schools, he's looking at life after football.

"I look at the academic program for sure," Ball said. "That has to be number one because there's more than just football when it comes to recruiting."

He reports running 4.9 seconds in the 40-yard dash at his school while also having a 340-pound bench press. Ball, who was team captain as a sophmore and junior, is torn on when he'll make his college decision.