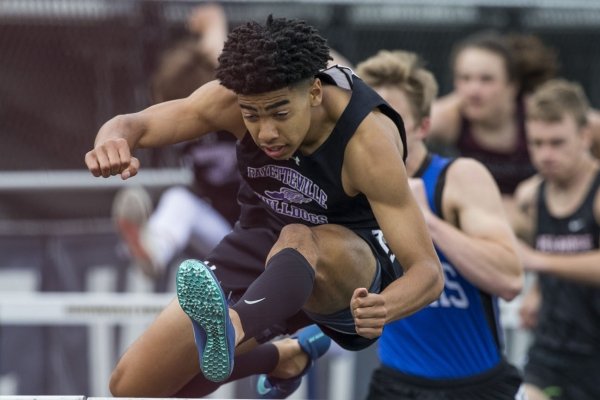 Isaiah Sategna, a freshman at Fayetteville, has been named the boys track Newcomer of the Year by the Northwest Arkansas Democrat-Gazette sports staff.

Fayetteville sophomore Isaiah Sategna is one of the nation’s top athletes, and his athleticism shines on the football field and in track and field.

Sategna, 5-11, 170 pounds, recorded some of the best performances in track and field nationally as a freshman and followed that up with an impressive sophomore season on the gridiron.

In the long jump, he set a state indoor record for freshmen with a jump of 24 feet, 1.5 inches, which was No. 7 overall nationally, and was just shy of the national freshman record set by Mike Newell in 1996 with a leap of 24-5. He also high jumped 6-6.

The son of Arkansas track assistant Mario Sategna, Isaiah enrolled at Fayetteville a year ago in January and immediately jumped into the indoor season. In his first meet, he broke a 17-year-old school record in the 300 hurdles with a time of 38.32. He scored 54 of the Fayetteville’s 158.5 points to win the Class 6A state outdoor track title.

Over the weekend, he continued his dominating ways. He won five events to lead Fayetteville to the Class 6A state indoor title with 161 points. He set state records in the 60 meters and the 60-meter hurdles with times of 6.86 seconds and 7.88 seconds.

Sategna had 36 receptions for 700 yards for an average of 19 yards per catch while scoring 6 touchdowns for the Bulldogs. He was a first-team all conference selection.

He took part in last year’s spring practice while also competing in track and field.

“He’s just a great overall football player,” Fayetteville coach Casey Dick said. “He kind of came into our system late with the change. Probably about the last half of the season he started getting really comfortable with what he was doing. Everybody knows he can run. He’s probably one of the most explosive kids I’ve been around. He tracks the ball really, really well in the air. He's capable of making big plays. We’ve seen him get rocked a couple of times and he gets right back up and wants to go back into the game. You know he’s tough.”

Dick, a former quarterback at Arkansas from 2005-08, said Sategna is looking to play football and participate in track and field on the next level.

“I believe as of right now, he’s going to do both,” Dick said.

Sategna's father was a three-time All-American at LSU, where he won the 1994 SEC title and the 1995 NCAA title in the decathlon. His mother, Dahlia, was a standout sprinter for LSU and competed for Jamaica in the 1992 Olympics in Spain.

The younger Sategna had 62 catches for 1,247 yards for Austin Westlake’s junior varsity squad as a freshman. Dick believes Sategna has all the tools to be special on the football field.

“He’s got it all,” Dick said. “I’m excited to see where he progresses in the next two years. It’s always a big jump for a guy inbetween their sophomore to junior year. He really didn’t even start scratching the surface of the elite capability that he has until about halfway in the season. Probably Week 6-9 is when he really started playing.”

Sategna is working out with the football team while also focusing on track and field.

“He’s been in the weight room lifting with us a couple of mornings per week making sure that strength is maintained,” Dick said. “He’s working hard at both things. He’s not able to get in there all the time, but as far as him getting in there and working he does a good job at it.”