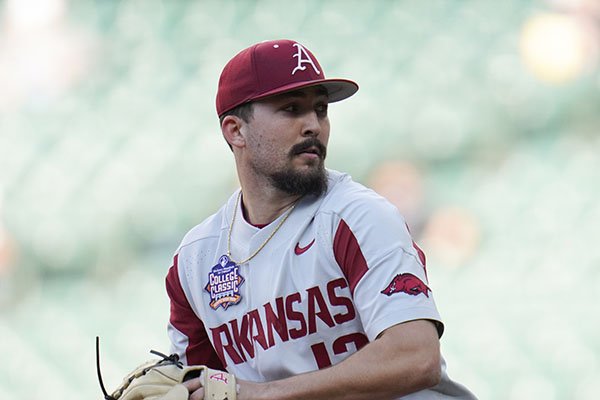 FAYETTEVILLE -- As if the University of Arkansas didn't have enough trouble with a four-game losing streak, now comes a minor injury issue with Friday night starter Connor Noland.

Coach Dave Van Horn said at Wednesday's Swatter's Club meeting at the Hilton Garden Inn that the right-hander Noland (2-0, 2.00 ERA) would not pitch in the No. 10 Razorbacks' weekend series against South Alabama so he could rest a strained left oblique muscle.

Noland tweaked the muscle, located on the sides of the lower torso, late in his start against Oklahoma on Friday, which he left after 51/3 innings. Pitching coach Matt Hobbs and team trainer Corey Wood made a mound visit to check on him in the fifth inning, and Noland said he felt like he was cramping up, but he remained in the game and got out of the inning. Noland got a strikeout to open the sixth, then gave up a game-tying home run to Brady Lindsly and allowed a single before coming out after 70 pitches.

"Once we got him over there and talked to him a little bit, we realized we needed to shut him down," Van Horn said. "I'm glad we did."

[Video not showing up above? Click here to watch » https://www.youtube.com/watch?v=hIstnexzMrg]

Van Horn said Noland does not want to be skipped in Friday's series opener for the No. 10 Razorbacks (7-4), but the coaching staff decided to give him a rest.

Left-hander Patrick Wicklander (2-1, 3.00), who had a rough start in a loss to Texas on Saturday at the Shriners College Classic in Houston, will move up a day to start Friday's 3 p.m. game against the Jaguars (7-7).

"Wicklander's got great stuff, he just didn't have it last week," Van Horn said. "I don't know why. We hadn't really seen it."

Wicklander had not allowed an earned run in his first 11 innings before giving up 6 runs, 4 earned, on 5 hits and 1 walk in an 8-7 loss against the Longhorns. Wicklander pitched one inning and did not record an out after facing four batters in the second inning.

"Who knows?" Van Horn mused. "If he had gotten through that second inning, maybe he could have turned it around, but he threw a lot of pitches in that inning and that's usually a disaster. It's hard to send them back out if they throw 30 pitches in an inning, or 32."

Relievers Marshall Denton, Caleb Bolden and Jacob Burton combined to allow 1 earned run on 5 hits and 2 walks in the final 7 innings of that game.

"With Bolden starting on Saturday, just do what he's been doing," Van Horn said. "He's been flat out just throwing strikes and pitching, pitching ahead in the count and teams are swinging.

"They're making contact. He's not striking a lot of guys out, but you know he's just done a good job for us. If he can do that again and give us three to four or five good innings, we'll go to the next guy."

Right-hander Kole Ramage (1-1, 3.18) is slated to start Sunday's noon finale against the Jaguars. Ramage has given up 11 hits and 4 walks with 10 strikeouts in 111/3 innings covering 2 starts and 2 relief appearances.

He was tagged with the loss in Sunday's 3-2 setback to Baylor in Houston, allowing two earned runs in five innings.

"You know Ramage, he threw real well against Baylor," Van Horn said. "He just made a couple of mistakes. I think in a 0-0 game, he's got a 1-2 count or an 0-2 count on the nine-hole hitter and he hits him in the foot with a back-foot slider."

Van Horn wasn't prepared to speculate on who would start the two scheduled midweek games against Grand Canyon, which lead into the Razorbacks' SEC opener at No. 19 Mississippi State.

"After the weekend, we'll just see what we've got left and go from there," Van Horn said. "Hopefully we have a little better feeling than we had the last four games. Put a team on the field and probably start some younger guys as far as on the mound. Give some guys an opportunity."

Noland, of Greenwood, has started on Friday the first three weeks of the season. He has given up 13 hits and 4 walks, with 19 strikeouts, in a team-high 18 innings for a WHIP of 0.944 and a batting average against of .203.