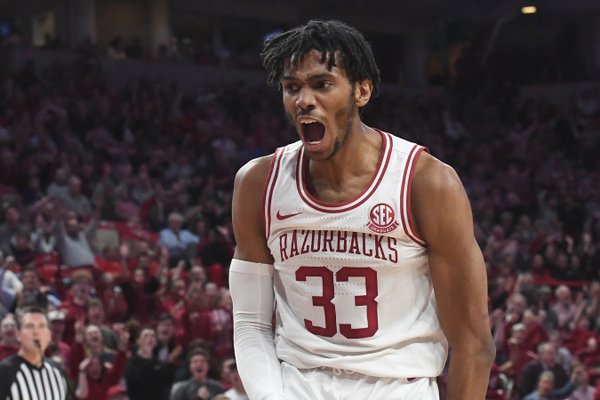 FAYETTEVILLE -- Just when it looks like the University of Arkansas basketball team is off the NCAA Tournament bubble for good, the Razorbacks find a way to get back on it.

Arkansas beat LSU 99-90 on Wednesday night in Walton Arena before an announced crowd of 15,169 for a victory critical to the Razorbacks' NCAA Tournament hopes.

"We knew we had to win tonight for sure," Arkansas Coach Eric Musselman said.

"We needed to get a win to get back alive on the NCAA Tournament bubble list," said junior guard Mason Jones, who led Arkansas with 36 points. "We knew we wanted to come out here and play hard, and we did that."

Senior guard Jimmy Whitt, playing his final home game for the Razorbacks, had 26 points, a career-high 15 rebounds, 5 assists and 2 steals.

"I know Mason Jones gets a lot of the credit, and he did a great job tonight scoring 36," LSU Coach Will Wade said. "But Whitt just controlled the game with 26, 15, 5 assists."

Whitt, who came into the game averaging 13.8 points, scored 22 against LSU when the Tigers beat the Razorbacks 79-77 on Jan. 8 at the Maravich Assembly Center. He's a combined 18-of-30 shooting against LSU this season, including 9 of 17 on Wednesday night.

"Just watching his press conference from Monday, he seems like an unbelievable kid, an unbelievable person, and he deserved to go out like that on senior night. I wish it wouldn't have been on us, but he was tremendous."

Whitt said he appreciated Wade saying he controlled the game.

"Obviously, to take 54 foul shots is a really unbelievable number," Musselman said. "But that's what happens, too, when you get a big lead and then it gets under that eight-minute mark.

"You've got to think about fouling and getting a little more aggressive, and that's what LSU had to do."

Wade didn't want to say too much about Arkansas attempting 31 more free throws than LSU.

"I'm not going to talk about that," he said. "I might get fined, so my wife would be upset with that."

"You wouldn't believe it tonight, but statistically-speaking coming into the game we've fouled the least of anybody in the SEC," Wade said. "That's the one good part about our defense.

"Everything else about our defense is awful. The one thing we hadn't done all year is foul. But that's the way it goes. We fouled jump shooters, we fouled them inside. It just really hurt us."

LSU outrebounded Arkansas 40-35, but that was fine with the Razorbacks after the Tigers had a a 53-24 advantage in the teams' first game.

"I thought the rebounding was phenomenal," Musselman said. "We were all focused on it."

Arkansas sophomore guard Desi Sills scored 13 points off the bench and hit back-to-back three-pointers to give the Razorbacks the lead for good at 9-6.

Sophomore guard Isaiah Joe scored 11 points for the Razorbacks, and sophomore forward Ethan Henderson had a career-high 10 points and 7 rebounds.

"We had five point-blank missed layups," Musselman said. "We could have scored 112, 113 points just by making our foul shots and making our layups.

"I thought offensively, by far, the best we've played. Our guards were phenomenal -- 86 points by our backcourt."

"I thought Arkansas played with great energy, and they did a really, really good job," Wade said.

"We made the game way closer than it was supposed to be by missing free throws," Jones said. "But that's part of the game.

"We were playing with the devil, and the devil was killing us. We just calmed down, got us a couple buckets [to extend the lead]. We had enough push power to finish the game."

"I thought we played with better energy in the second half," Wade said. "We just got too far behind in the first half. But a lot of credit to Arkansas."

Jones scored 30 or more points for the eighth time this season.

"It's not really a surprise to it," Whitt said. "I think at this point, that's just regular for him to go out there and do that."

Fans chanted "M-V-P! M-V-P!" for Jones late in the game when he went to the free-throw line.

"It's pretty cool, you know?" Jones said of hearing the chant. "This story is still going. God still has so many things in store for me.

"It's just crazy to see the fans appreciate the way I've played. For them to call me an MVP is amazing."

Arkansas closes the regular season at Texas A&M on Saturday and likely needs to win that game and some games in the SEC Tournament to earn an NCAA Tournament at-large bid.

"Good luck to Arkansas the rest of the way," Wade said. "I hope they make the tournament."

UP NEXT Arkansas plays Texas A&M at 3:30 p.m. Saturday at Reed Arena in College Station, Texas.