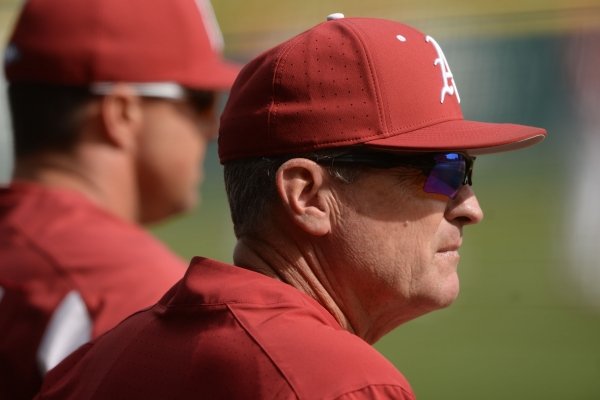 FAYETTEVILLE -- The last seven nights have likely featured some deep introspection for the University of Arkansas players and coaches.

A four-game losing streak, including the last three games by one run, can do that.

The No. 10 Razorbacks (7-4) followed up three losses at the Shriners College Classic with a befuddling 8-7 home loss to previously struggling Illinois State on Tuesday.

"The past four games, we make one play here, one hit there ... whatever, we could have it flipped around really quick," said junior Heston Kjerstad, the team's leading hitter at .435.

Arkansas gets right back into action today at 3 p.m. against South Alabama (7-7) in its final weekend series before SEC play starts next Friday at Mississippi State.

The Razorbacks have juggled their pitching rotation with Connor Noland ruled out with a mild oblique strain in his left side. Lefty Patrick Wicklander (2-1, 3.00 ERA) has gotten the nod for today's game against South Alabama right-hander Drake Nightengale (0-0, 2.08).

Shortstop Casey Martin went 4 for 5 in the loss to Illinois State, but he fixated on the lone out, a strikeout after he failed to get a sacrifice bunt down with the tying and go-ahead runners on base in the seventh inning.

"Who knows, that could have been the difference in the game and that's on me," Martin said. "I should have done my job. It's just little things like that. It definitely matters, but it's definitely frustrating."

Coach Dave Van Horn said at his Swatter's Club talk this week the team has been frustrated because they know the potential is there.

"There's no panic going on with us, but there is a little frustration," Van Horn said. "Because there are such high expectations with us."

Junior catcher Casey Opitz said the Razorbacks have to make adjustments and not try to do too much individually.

"Obviously, when you lose four, everyone wants to provide that spark, and you can't really do that in this game," Opitz said. "In basketball, you can kind of take over. The guy can go at somebody. But in baseball, you've got to let it come to you. I think that's what we've been struggling with."

Freshman second baseman Robert Moore, the team's third-leading regular with a .350 average, provided perspective beyond his years on the Hogs' current slide.

"We've lost four straight but there hasn't really been a common theme to each loss," Moore said. "It's been for different reasons each time. ... There's a lot of good out of all four losses. You can pick and point to a lot of good parts. So we're very confident. We know who we are. We know what we can do. We know what we're capable of."

The Jaguars are in the midst of five consecutive games against SEC competition following Tuesday's 12-2 loss at unbeaten Alabama. They take on LSU next Wednesday after the three-game set at Baum-Walker Stadium.

South Alabama is off to a slow start offensively with a .200 batting average, and yet they rallied with a four-run ninth to beat Gonzaga 7-6 on Sunday to win the series 2-1. The Jaguars have scored 39 runs in nine games since suffering back-to-back shutout losses at defending NCAA champion Vanderbilt by the scores of 3-0 and 4-0 on Feb. 18-19.

"They've played some good teams and they've faced some good arms, but they're still struggling," Van Horn said. "That's amazing to me because they usually hit a lot.

"They're finding a way to win one or two games every weekend hitting .200. That's amazing. ... They're a very scrappy, talented, tough program and they're coming here, kind of like we are, needing to win games."

Bolden is coming off a four inning stint against Texas in which he allowed no runs on two hits and struck out five. Bolden, coming off Tommy John surgery, said pitching coach Matt Hobbs is prepared to let him roll for a while.

"Coach Hobbs told me this week he was just going to let me run with it," Bolden said. "I'm not really at any pitch count. Just whenever I stop doing my job is when he's going to pull me out of there."