Razorbacks still looking to push all the right buttons 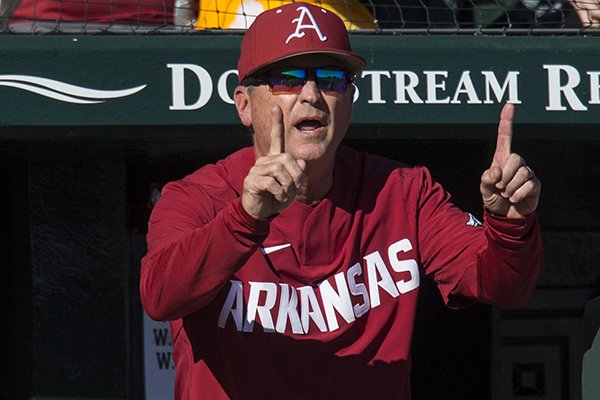 Arkansas coach Dave Van Horn signals from the dugout during a game against South Alabama on Friday, March 6, 2020, in Fayetteville.

The Jaguars, who entered with a .200 batting average and four home runs through 14 games, hit a combined three home runs against Arkansas starter Patrick Wicklander and reliever Kevin Kopps to go ahead 8-3.

South Alabama finished with a season-high 11 hits and scored multiple runs in five innings of a 13-6 victory over the No. 10 Razorbacks. Arkansas lost its fifth consecutive game, including its second straight at home where it lost only three nonconference games last season.

The Razorbacks and Jaguars are scheduled to play again Saturday at 2 p.m.

After defense and a lack of timely hitting let Arkansas down at last week’s College Classic in Houston, pitching has been the issue since the Razorbacks (7-5) returned to Fayetteville.

South Alabama (8-7), which also had a season high in runs, was the second consecutive team to have an abnormal offensive outing against the Razorbacks. Illinois State had 11 hits in an 8-7 victory over Arkansas on Tuesday. The Redbirds entered the game batting .195.

Illinois State followed that performance with a 13-hit outing in a victory over VCU on Friday, but against Arkansas the Redbirds hit 119 points over their season average entering the game. South Alabama batted 97 points over its average Friday.

It was the second consecutive poor start for Wicklander, who only recorded three outs against Texas six days ago. It wasn’t exactly short rest given his low pitch count against the Longhorns, but Wicklander pitched Friday because the Razorbacks’ No. 1 starter, Connor Noland, is out this weekend with an oblique injury.

After pitching 10 scoreless innings to begin the year, Wicklander’s ERA has ballooned to 6.32.

All three of South Alabama’s home runs - by Ethan Wilson in the second and fourth innings, and by Michael Sandle in the first - scored runners who reached on Wicklander walks. Wilson’s second home run came on the third pitch thrown by Kopps on a 2-0 count.

“Not to say anything bad about (pitchers), but we’ve got to get ahead early,” Arkansas shortstop Casey Martin said. “We can’t get behind in counts and have to feed fastballs, because it doesn’t matter what league you’re in, fastballs are easy to hit.

“Playing from behind, man, it’s tough. We’re just leaving too many over the plate. Even with two strikes we’re still throwing them over the plate. We’ve got to quit doing that. We need to learn from that. If they can just get ahead, I think we’ll be fine.”

Van Horn said he brought in the right-handed Kopps in to face Wilson because he was hitting .444 against left handers, but only .206 against right handers.

“On a 2-0 count Kevin throws one right there and the ball was hit over the scoreboard,” Van Horn said. “Just when we were kind of getting back up off the canvas, we just got blasted again.

“It was just really disappointing watching some of our older pitchers not be able to get outs.”

During his speech to the Swatter’s Club earlier this week, Van Horn said the team needed Kopps to get going after he had struggled in most of his outings. Kopps, a team captain and a reliable reliever throughout his career, has allowed 7 runs in 9 ⅓ innings this season, including 3 runs on 2 hits and 2 walks Friday.

Following the game, Van Horn said the redshirt junior right hander won’t pitch again for a while and might be reassigned to midweek starter.

“I don’t have a lot of confidence to throw him out there if we’re struggling early in a game,” Van Horn said. “If in the eighth inning it’s tight, we’ve got other pitchers we’re going to have to go to until he can get it together and show us in games that he can get the big out.”

If there is a silver lining for Arkansas in the midst of the losing streak, it is that Van Horn has seen the Razorbacks through similar slumps before.

Van Horn indicated Friday that he has seen some positives despite the five straight losses that might hint to the team coming out of the slump. Some younger pitchers have thrown well and the offense appears to be snapping out of the funk it was in at the College Classic.

Arkansas has a combined 25 hits in the losses to Illinois State and South Alabama, and scored a combined 13 runs.

The team is still struggling to produce with runners in scoring position, though, going 2-for-11 Friday to bring its total to 12-for-63 during the losing streak. Arkansas also struck out 12 times - its fifth game of 10 or more strikeouts this year.

South Alabama starter Drake Nightengale, a preseason second-team All-American by Collegiate Baseball and the preseason Sun Belt Conference pitcher of the year, had nine of the Jaguars’ strikeouts in six innings.

Nightengale entered the game with 30 strikeouts to 4 walks, but issued 6 walks against the Razorbacks pitching to a zone that Van Horn described as “really tight.” Arkansas pitchers walked nine.

“(The zone) was the same for both teams, so we can’t complain,” Van Horn said.

The Razorbacks had some chances to get back into the game. After South Alabama had gone ahead 5-1 in the top of the second inning, Arkansas pulled within 5-3 on Martin’s one-out RBI double and Casey Opitz’s fielder’s choice RBI in the bottom of the third.

South Alabama led 10-3 in the fifth when Goodheart homered to lead off the bottom of the inning. Martin followed with a one-out double, but couldn’t advance.

Perhaps Arkansas’ best chance at a rally was in the seventh when, trailing 12-4, Goodheart and Braydon Webb singled, and Martin walked with no outs. The Razorbacks only scored one run in the inning, though, as Jacob Nesbit and Zack Gregory struck out in back-to-back at-bats against Jaguars reliever Jase Dalton.

“Our players kept fighting and we had runners all over the bases,” Van Horn said. “We just couldn’t get that bases-loaded double or that three-run homer just to kind of climb back in again.

“You’re just disappointed that we didn’t give ourselves a better opportunity to hang in there against a good pitcher.”

The Razorbacks are beginning to get the type of production from Martin that was expected in the preseason when he was a consensus All-America pick. Martin went 2-for-3 with 2 walks and an RBI Friday, and is 6-for-8 with 3 doubles and an on-base percentage of .800 since making a change to his batting mechanics earlier in the week.

“He looks good at the plate,” Van Horn said.

Goodheart is also beginning to produce at a clip comparable to when he was All-SEC a year ago. Goodheart was 2-for-2 with 3 walks and 3 runs scored against the Jaguars.

Van Horn shook up his lineup for the game, moving second baseman Robert Moore to the leadoff position and inserting Gregory at first base in place of Cole Austin. Moore went a season-worst 0-for-6, while Gregory was 0-for-3 with a walk and a sacrifice fly RBI.

“Even during the losing streak - which is amazing to me because I didn’t see it coming - I’ve seen a lot of good things that we can build off of. We’ve got tomorrow...and we still have a chance to win this series. Hopefully we can come out tomorrow and even this thing up.”