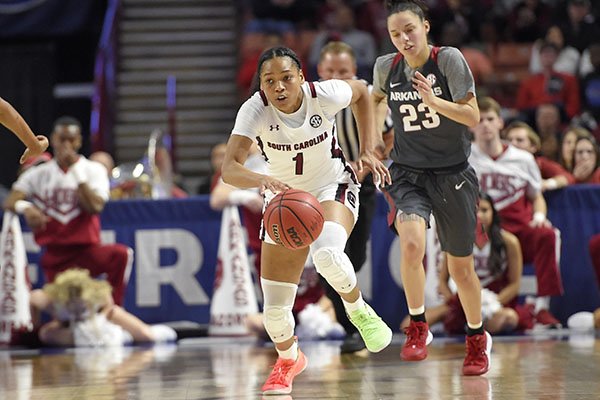 GREENVILLE, S.C. — South Carolina coach Dawn Staley had a message for her team, on its heels in the third and struggling to blunt another major Arkansas comeback at the SEC Tournament.

“I didn't flinch and neither should you,” Staley said during a timeout after the 25th-ranked Razorbacks cut No. 1 South Carolina's 19-point lead to 55-48.

Destanni Henderson, Aliyah Boston and the Gamecocks did not give in, rolling to its 25th consecutive win 90-64 over Arkansas on Saturday night to reach the SEC championship for the fifth time in six seasons.

Henderson had a career-high 21 points, hitting four 3-pointers off the bench, and Boston got 13 points and 13 rebounds for her second straight tournament double-double.

The two also combined for all 12 points in a 12-0 to close the third period and restore South Carolina's large lead.

“I just had to come out and match their energy,” said Henderson, who's previous career best was 19 points in a win last year over Arkansas. “I had to stay ready, stay focused.”

That focus has South Carolina bidding for its fifth tournament title since 2015. It had won an SEC record four in a row before losing in the quarterfinals to Arkansas in 2019.

“We wanted back and we're here,” Staley said. “No need to let up now.”

The Gamecocks will take on either defending SEC champion in No. 9 Mississippi State or No. 16 Kentucky in Sunday's finale.

Arkansas (24-8) had rallied from 17-points down on Friday to eliminate No. 15 Texas A&M in the quarterfinals, 67-66. This time, the Razorbacks' could not finish and lost their third straight this season to the Gamecocks.

Razorbacks coach Mike Neighbors said he knew his team was “on fumes” during its furious third-quarter start that had the large pro-South Carolina crowd — the site is just two hours or so from the Gamecocks campus — stunned.

Neighbors said his stategy was to “ride it out and see what happens.”

Zia Cooke had 14 points while Boston, another freshman starter, got her 13th double-double this season.

The Razorbacks looked like they wanted to avoid falling in a big hole when they nailed a pair of 3-pointers in the first 90 seconds.

But then South Carolina's defense kicked in and Arkansas went cold. The Razorbacks missed 11 straight field goals into the second quarter as the Gamecocks opened a 20-10 lead.

The 29 points tied for the third fewest the Razorbacks, who average better than 84 points a game lead the SEC, have scored the first 20 minutes.

Amber Ramirez had 18 points off six 3-pointers to lead the Razorbacks.

Arkansas top scorers in Alexis Tolefree and Chelsea Dungee struggled against South Carolina's defense, combining to shoot 5 of 23 for 18 points — below their season's average of nearly 34 points a game.

Arkansas: The Razorbacks didn't show it in this one, but they have all the offense necessary to make an impact in the NCAA Tournament in a couple of weeks. Dungee and Tolefree are both relentless players who can dig Arkansas out of most holes it gets into.

South Carolina: The Gamecocks seem to play their best against the best competition. They lead the nation with 12 victories over ranked opponents this season. They're only loss on the year came to then No. 17-ranked Indiana back on Thanksgiving night. South Carolina will a few more opportunities to improve that mark before their season ends.

Aliyah Boston made just her second three this season as part of that 12-0 run. Staley chuckled when asked if Boston's outside shots (she was 1 of 3 against Arkansas and 2 of 12 on the year) were by design. While not a regular part of the plan, Staley said Boston's free to take those shots when the opponent locks down the middle.

Arkansas coach Mike Neighbors said South Carolina, 3-0 against the Razorbacks this season, have no weaknesses. “You can go to all the coaches clinics in the history of this world and you're not going to find a hole in this team,” he said.

Staley disagreed, but would not detail them, she said, until after the season.

South Carolina advances to the SEC Tournament finals on Sunday.