By: Paul Martin Special to the Democrat-Gazette
Published: Sunday, March 8, 2020 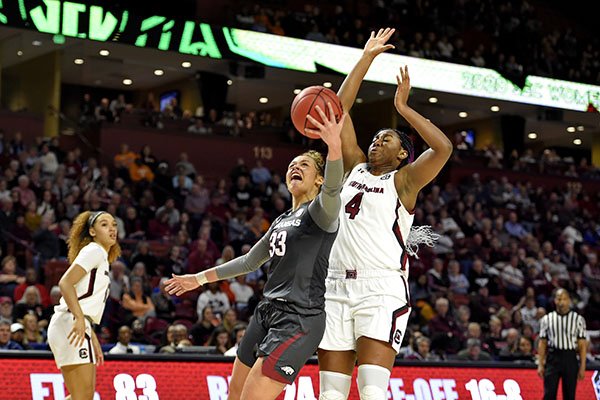 GREENVILLE, S.C. -- The University of Arkansas women's basketball team couldn't pull off another upset against South Carolina in the SEC Tournament.

No. 1 South Carolina, eliminated in the quarterfinals last year by the Razorbacks, built an 18-8 first-quarter lead and cruised to a 90-64 victory Saturday in the semifinals at Bon Secours Wellness Arena.

No. 25 Arkansas (24-8) will wait to learn its destination in the NCAA Tournament, which will be announced March 16.

South Carolina outrebounded Arkansas 60-33, scored 24 points off 28 offensive boards, and the Razorbacks had just 23 defensive rebounds. When Arkansas found a groove with tempo in the second quarter, the Gamecocks answered with that style of play as well.

"They're as complete a team as we've had to face," Neighbors said.

South Carolina's Destanni Henderson had a career-best 21 points off the bench on 4-of-9 three-point shooting to lead all scorers. SEC Freshman of the Year Aliyah Boston had 13 points and 13 rebounds, and Zia Cooke added 14 points.

Amber Ramirez led Arkansas with 18 points on 6 of 9 three-pointers, and Makayla Daniels had 16. All-SEC performers Chelsea Dungee and Alexis Tolefree combined for 14 points on 5-of-23 shooting. The Razorbacks shot 13% in the first quarter and never got closer than seven points afterward.

Ramirez made 3 three-pointers in the second quarter for Arkansas, but Henderson answered for South Carolina, knocking down three of her own in a back-and-forth period that saw South Carolina up 38-27 with 2:15 left.

"They finish quarters and halves maybe better than any team I've had to watch," Neighbors said. "It was tight, then the next thing you look up, you're down 12 or 15. They finish."

Arkansas opened with an 8-0 run to start the third quarter. South Carolina started 2-of-8 shooting, and the Razorbacks took advantage with Boston on the bench with three fouls.

Tolefree sprinted for a pair of transition layups, and Ramirez drained two three-pointers in the quarter to cut the lead to 50-42 with 5:23 left in the period. A'Tyanna Gaulden then hit a pair of free throws and a layup moments later to make it 55-48.

But the Gamecocks ended the quarter on a 12-2 run as Boston scored four points in a two-minute span, and Henderson added her fourth three-pointer and a jumper to make it 67-48. Arkansas never recovered.

"They're the No. 1 team in the country," Ramirez said. "They made shots, they battled on the boards. But the spark we had gave them a little bit of a shake."

Despite the loss, the Razorbacks' progress is clear. Last year's tournament run, a 10-6 SEC record and a second consecutive year in the tournament semifinals are building blocks, Neighbors said. He'd prefer his team finish in the SEC's top four to get the double-bye and a better draw next year.

"This is the next step in that," Neighbors said. "That's what's next for us."

ESPN Bracketologist Charlie Creme projects the Razorbacks as a No. 7 seed facing Creighton in Storrs, Conn., with UConn looming as a possible second-round matchup.

"I think we're further than we were last year," Daniels said. "I think we've kind of distinguished ourselves to being in the tournament. Last year we were kind of on the bubble. I think this year we've put ourselves in a better position."

Rickea Jackson had 29 points and defending champ No. 9 Mississippi State took control in the second half to defeat No. 16 Kentucky, reaching its fifth consecutive SEC Tournament final.

The Bulldogs were down 35-32 at the half and still behind when Rhyne Howard’s jumper put Kentucky in front 39-37.

But freshman Aliyah Matharu had three consecutive baskets to put Mississippi State (27-5) ahead for good and Jackson, another freshman, pushed the pace to make sure Kentucky could not rally.

Matharu finished with 15 points, 13 of those in the final two quarters to fuel Mississippi State’s comeback.

Mississippi State lost the tournament title to the Gamecocks three consecutive years from 2016-2018, the last one when it came in as the No. 1 seed.