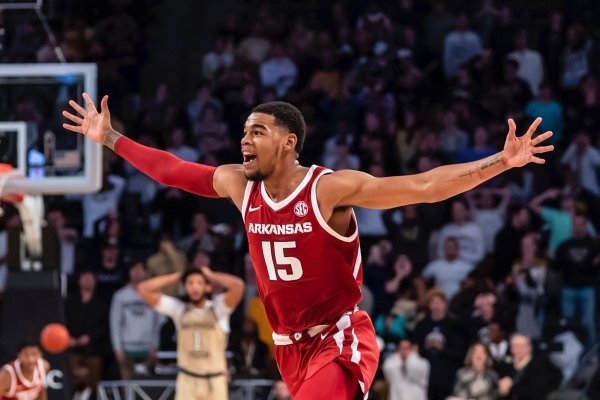 NASHVILLE, Tenn. -- The University of Arkansas basketball program didn't have to beat out any of its SEC rivals in the spring of 2018 to sign Mason Jones out of Connors State Community College in Warner, Okla.

Arkansas didn't have to battle any Big 12 programs, either, for Jones' signature. Or programs in the Atlantic Coast Conference -- where Jones' brother, Matt, played for Duke -- Big East, Big Ten or Pac-12.

In addition to Arkansas, Jones said the only other Division I program to offer him a scholarship was the University of Central Arkansas, which plays in the Southland Conference.

Now there isn't a program in the country that wouldn't love to have Jones on its roster.

Jones, a 6-5 junior guard from DeSoto, Texas, was announced Tuesday as The Associated Press co-SEC player of the year along with Mississippi State sophomore forward Reggie Perry, who committed to the Razorbacks before signing with the Bulldogs.

"It's a well-deserved honor for Mason," Arkansas senior guard Jimmy Whitt said. "The type of stuff he's done for us this year, especially on the scoring end of things, is so impressive.

"This is a tough conference to be able to do what he's done as a scorer. This is a conference where a lot of teams take pride in playing defense. There's a lot of strong, great defenders. So for him to go out and score the way he has been is amazing."

"To be player of the year is incredible coming from where I did as a role player last year," Jones said. "At the end of the day I have to give a lot of credit to my coaches and teammates for all their help and for being right there with me the whole season through the ups and downs.

"It's a good feeling. But there's more work to be done."

Jones will lead the Razorbacks (19-12) against Vanderbilt (11-20) in a first-round SEC Tournament game tonight in Bridgestone Arena around 8:30 Central.

"Everybody's 0-0 now, and we're getting ready for the conference tournament," Jones said. "It's time to go play our best."

Kentucky sophomore guard Immanuel Quickley, who averaged 16.1 points for the SEC champion Wildcats, was voted SEC player of the year by the conference coaches.

Jones scored 30 points in the season opener against Rice in a preview of things to come. It was his first of what has become nine games this season in which he has scored 30 or more points -- including 41 against Tulsa, 40 against Auburn, 38 against Mississippi State, 37 against Tennessee and 36 against LSU.

"I think Reggie Perry is very deserving of player of the year when you look at what he's done for our team," Mississippi State Coach Ben Howland said Monday before the SEC honors were announced. "But I love Mason Jones. He is an absolute star. An incredible player. He has a great feel for the game. He's going to end up being an NBA player. He's a really, really special talent.

"Mason's smart, and he's realized that, 'Hey, nobody calls more fouls than SEC officials. So you know what I'm going to do? I'm going to drive it down their throat,' " said Matt Zimmerman, a former Arkansas assistant coach who is now the color analyst on the UA radio broadcasts. "He attacks, and he plays downhill basketball."

"The teams we've played have tried it all against Mason," Whitt said. "We've seen box-and-ones, we've seen face-guarding, denial. For him to go out there and continually do what he has each and every night, you just have to chalk that up to greatness."

Arkansas Coach Eric Musselman said earlier this season that Jones carried the Razorbacks when sophomore guard Isaiah Joe was out of the lineup as he recovered from knee surgery.

"I haven't been around too many college basketball players that have such a burden that Mason's had over the last several games," Musselman said after Jones scored 21 points in a 73-59 loss at Florida. "I mean, look, there were five Florida Gators concentrating on one guy. And he continues to step up."

In addition to leading the SEC in scoring, Jones is leading Arkansas in rebounding (5.4 per game), assists (3.3) and steals (1.6)

"He does everything well," Howland said. "He's just a complete player."

Tennessee Coach Rick Barnes said the season Jones has put together is particularly impressive considering how opposing teams work to defend him.

"You admire the fact that he's a guy that other teams game plan for a lot, and he can go out and put up the kind of numbers he has," Barnes said. "He's had a terrific year. I think he's certainly bought into that style of basketball that Eric coaches and teaches, and it's benefited him. He took really good advantage of it."

Jones said he didn't receive any NCAA Division I offers after his senior season at Triple A Academy in Dallas and at a prep school in Branson, Mo., so he decided to go to junior college.

After averaging 15.5 points and 6.9 rebounds as a freshman at Connors State, he got the attention of Arkansas, where Mike Anderson was head coach at the time and his staff included T.J. Cleveland and Zimmerman.

Zimmerman said Eastern Oklahoma State Coach Scott Edgar -- who worked with Anderson at Arkansas and Alabama-Birmingham, and whose team plays in the same conference as Connors State -- recommended Jones to the Razorbacks' coaches.

The Razorbacks were in desperate need of shooters, Zimmerman said, after losing guards Jaylen Barford, Daryl Macon, Darious Hall and C.J. Jones from the 2017-18 team.

"It's easy to take a kid that everybody wants," Zimmerman said. "It's a different deal when nobody else in the SEC or in the Big 12 or any other Power 5 conference was recruiting Mason.

"But T.J. Cleveland said he believed Mason can shoot and score in the SEC, and Scott Edgar said he knows how to play angles and is deceptively quick and is a clever defensive player. They both hit the nail on the head."

Jones averaged 13.6 points for Arkansas last season and twice scored 30 points -- against Florida and Mississippi State -- but has taken his game to a higher level.

"Mason Jones has had a monster year," South Carolina Coach Frank Martin said. "I've got a lot of respect for him. I think he's an unbelievable competitor. To know where he was at three or four years ago and see where he's at today says a lot about the young man. I'm a big fan of his."

Jones said he weighed more than 250 pounds in high school, but he has worked hard to get himself in better condition. He's now listed at 200 pounds.

"If I remember correctly, he was somewhat of an overweight young man," Texas State Coach Danny Kaspar said last season after Jones scored 21 points against the Bobcats. "No, we didn't recruit him. We should have, but we didn't."

Jones scored 30 points at Alabama when the Razorbacks beat the Crimson Tide 82-78 this season.

"Mason Jones is one of those guys that just kind of goes and gets buckets every which way," Alabama Coach Nate Oats said. "He's a big, strong, physical guard that can play all over the floor.

Jones said he hears from coaches at Power 5 schools from time to time.

"Some coaches will text me stuff like, 'Hey, we missed on you,' " Jones said. "But it's all God at the end of the day. This was all part of His plan for me, part of my journey.

"It's all played out well for me here at Arkansas."