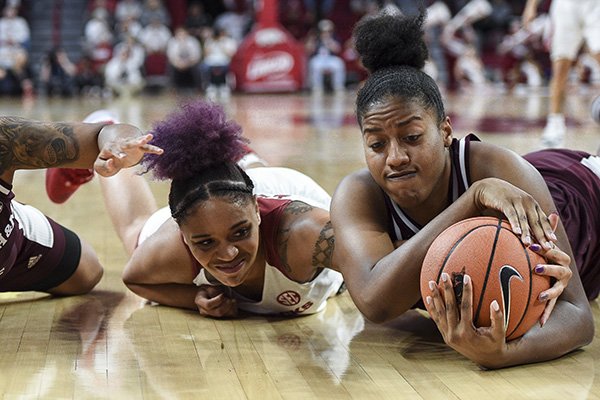 FAYETTEVILLE — The lone active Razorback who third-year Arkansas Women’s Basketball Coach Mike Neighbors didn’t recruit made the final shots that would have ensured a good Arkansas seeding for this NCAA Tournament that never was.

That he didn’t recruit but inherited her, Neighbors treasures most that Kiara Williams’ two free throws with eight seconds left completed 17-point comeback for Arkansas’ 67-66 victory over the nationally 15th-ranked Texas A&M Aggies in the March 6 second round of the SEC Tournament.

The team sports better free-throw shooters, but none who could more gratify the coach.

“If I could have chosen somebody to make those free throws, it would have been her,” Neighbors said.

Senior guard Jailyn Mason, who redshirted because of a foot injury, and Williams, from Little Rock Central, are the last players that Neighbors inherited from Jimmy Dykes.

These Razorbacks were NCAA Tournament bound before Williams rebounded teammate Amber Ramirez’s missed shot and was fouled trying for a putback.

But Williams’ free throws, avenging Arkansas’ SEC season-opening loss to A&M, put Arkansas “beyond the dreaded 8-9 tournament seed,” Neighbors said. “Kiara has got that moment being a part to advance to the NCAA Tournament.”

Neighbors asserts this team will be NCAA Tournament remembered.

“We’ll list this year as an NCAA qualifier,” Neighbors said. “And there’s not going to be an asterisk. I can tell you that. For Kiara, it’s a small reward for staying and battling through adversity.”

Williams, unhappy with her freshman year on an unhappy team, said she said stayed on AAU Coach Peter Durham’s advice.

“I’m glad I took that advice,” Williams said. “I’m glad I started to trust and believe in Coach Neighbors’ decisions that brought us to the point we are now. He made basketball fun again.”

Neighbors utilized Williams' running and shot-blocking talents (103 career blocks even missing 15 games this season because of foot injuries). At 6-1, Williams was often matched against centers while alternating with junior starter Taylah Thomas.

“As hard as it would be for her to guard the 6-5’s and 6-6’s, those 6-5’s and 6-6’s hated to guard her, too,” Neighbors said. “There’s a number of good players the last three years that got benched because of Kiara Williams. They couldn’t run with her. We would have recruited her if we had been here and we told her that. We’re going to remember Kiara.”

Remembered for more than just the free throws they won’t forget.