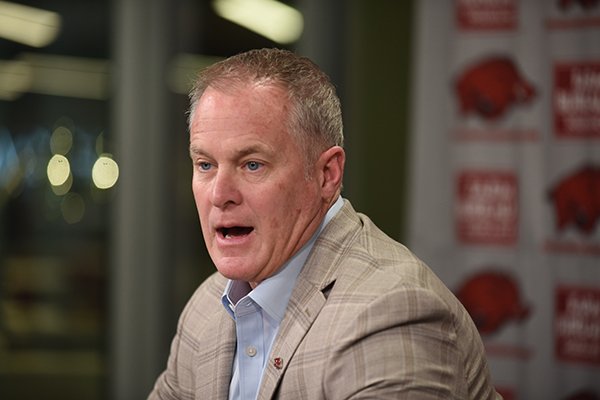 FAYETTEVILLE -- The college sports world was thrown off its moorings Thursday with the NCAA canceling the remainder of national championships for the winter and spring school terms.

The announcement came a little after 3 p.m. in a news release from the NCAA stating the decision was made by NCAA President Mark Emmert and the NCAA Board of Governors.

"The decision is based on the evolving COVID-19 public health threat, our ability to ensure the events do not contribute to the spread of the pandemic, and the impracticality of hosting such events at any time during this academic year given ongoing decisions by other entities," the statement read.

That means the NCAA Basketball Tournaments and the College World Series, which the University of Arkansas has played in the past two seasons, will not be held. Nor will the Women's College World Series or any other NCAA championship through the spring semester.

UA Athletic Director Hunter Yurachek, who returned from Nashville, Tenn., with the men's basketball team on Thursday, told the Arkansas Democrat-Gazette the decisions regarding suspensions and cancellations the past couple of days have been fluid and without precedent.

"I've been in college athletics for 27 years, and I've been walking on this Earth for 51 years," Yurachek said. "There's nothing that compares to this in my opinion, at least during my lifetime.

Yurachek is scheduled to meet with UA head coaches and athletic department personnel this morning to further discuss the developing news.

The NCAA's decision came hours after the SEC took the unprecedented step of suspending competition in all sports due to the growing threat of the coronavirus around the world.

The suspension was announced to be in place through March 30, SEC Commissioner Greg Sankey said in Nashville, where the men's basketball tournament came to an end after one night of competition.

"I've been through enough surprising events in the last 36 hours that I'm a bit numb, as you might imagine," Sankey said on the Paul Finebaum Show on Thursday regarding the NCAA's decision. "I'm a bit surprised that we've made a decision now in mid-March to not play baseball or the softball national championship event, so I look forward to learning what informed that decision."

The coronavirus was labeled a pandemic Wednesday by the World Health Organization.

"We have a public health situation in this country and across the globe that is emerging," Sankey said in Nashville.

The decision to suspend competition, which comes during the height of baseball and softball seasons, was to be re-evaluated during the interim period, Sankey said.

"We've created an interim period where we will work with our campuses to determine how we return to our normal operation," Sankey said at Bridgestone Arena. "It may not be March 30. It may be beyond. But that remains to be seen. We've identified a time frame where we can engage in conversation and in decision-making."

The SEC's decision to postpone competition came on the same day the University of Arkansas announced it was suspending in-person classes. The university will shift to online-only instruction starting Monday.

The move by SEC officials will force the cancellation of both the SEC gymnastics and equestrian championships, which were scheduled for March 21 at Infinite Energy Arena in Duluth, Ga., and March 27-28 in Bishop, Ga., respectively.

"The remainder of spring sports championships are after that date," Sankey said. "So when we go to golf, tennis -- which are the next sets of sports that are up -- we'll have an opportunity to evaluate and answer that question later. The same for ... softball, outdoor track and baseball, in that sequence."

The NCAA indoor track and field championships were scheduled to begin today in Albuquerque, N.M., without fans in attendance, but they are cancelled. The University of Arkansas had representatives of both their men's and women's teams there.

The No. 15 Arkansas baseball team, informed of the SEC's decision on Thursday morning, did not travel to Starkville, Miss., for what was scheduled to be a a three-game set against Mississippi State as the conference opener.

As for spring football, which already has begun at several SEC schools, the conference elected to leave practice scheduling up to the individual institutions for now. The Razorbacks are slated to start spring practice Monday with the annual Red-White game scheduled for April 25.

A spokesman for the UA wrote via text Thursday it would be premature to provide an update regarding spring football based on the NCAA's announcement that afternoon.

The No. 18 Arkansas gymnastics team's senior night meet against Penn State, which had been scheduled for tonight at 7 at Barnhill Arena, will not be held. A Thursday news conference with gymnastics Coach Jordyn Wieber and three gymnasts was canceled.

NCAA gymnastics regionals were scheduled for April 2-4 at four campuses: the University of Oklahoma, Denver University, Penn State and UCLA.

The No. 20 Arkansas softball team was slated to host No. 14 Georgia for a three-game series starting tonight at 6 at Bogle Park.

The SEC's move followed in line with leagues, conferences and organizations on many levels of sports, including the NBA, which announced its season suspension on Wednesday, and the NHL. Major League Baseball announced on Thursday it was suspending spring training and pushing back the start of the season by at least two weeks.