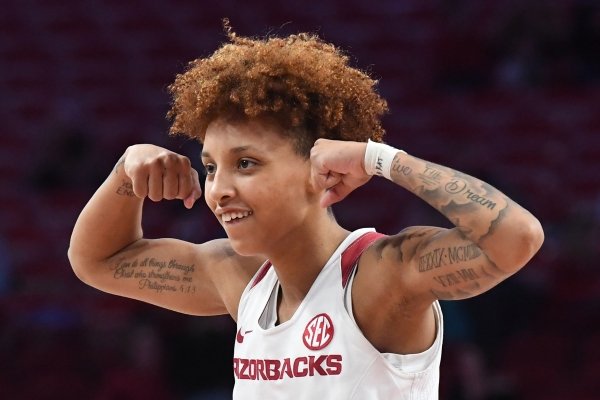 Arkansas guard Alexis Tolefree flexes after a score against Missouri on Sunday, Jan. 12, 2020 at Bud Walton Arena in Fayetteville.

University of Arkansas women's basketball Coach Mike Neighbors will make sure the accomplishments of this year's team are not forgotten despite the fact it won't get to participate in the NCAA Tournament.

The Razorbacks (24-8) likely were to hear their name called Monday when teams were selected for the tournament. It would have been only the 12th time in program history, but that opportunity was wiped out when the NCAA on Thursday canceled both the men's and women's basketball tournaments over concerns about the coronavirus pandemic.

"I'll stand on the top of Old Main and shout it if I have to," Neighbors said. "It's unprecedented things and unprecedented times, but that's not going to get lost in the coronavirus debate."

The Razorbacks won 10 SEC games for just the second time in program history. Those 10 victories are more than Neighbors' first two seasons (nine) combined. They finished in a four-way tie for third place in the regular season.

They were ranked among the top 25 teams in the country for most of the season, and were No. 24 in the last Associated Press poll.

Neighbors said difficult doesn't begin to describe what it was like telling his players their season was over. The team had finished practice and was gathered in the team room when word came down that the NCAA Tournament was canceled.

"It was the hardest meeting of all meetings ever because of how we had used the NCAA Tournament as a point we were working toward," Neighbors said. "We used it the last three years, and to be that close to it is tough.

"It's one of those days there's not a book or a class to help in that situation. We were just lucky to be together when it happened. We knew it was at least going to be postponed. I made the comment I don't think they'll cancel it so soon. That didn't age well."

It looks as though seniors Kiara Williams and Alexis Tolefree have played their final games as Razorbacks.

Tolefree enjoyed a banner season, being selected to the All-SEC first team. The Conway native posted a message on Twitter thanking Arkansas fans for their support.

"I never thought that my chances of living my dream out, and playing in the NCAA tournament would be taken away," Tolefree posted. "It's frustrating to know that's how my senior year ended but that's all in God's hands now. Thank you RazorbackNation for the endless support and cheer."

The NCAA announced Friday it likely will grant athletes of spring sports an extra year of eligibility, and will examine the possibility for athletes of winter sports as well.

Neighbors said he had heard about the idea of relief for spring sports athletes, but not for the winter sports. He also acknowledged information has been changing quickly over the past couple of days.

His job as a coach has changed drastically in a short time, Neighbors said.

"It went from skill developer, scheme-maker, things like that into helping them cope, dealing with this and moving past it," Neighbors said. "It's a new thing for all of us. We're just being there for each other and having trust in each other. We're going to do what's best for our student-athletes' well-being, and then basketball and academics next."

Neighbors said he hadn't had time to reflect on what the team accomplished this season.

No team that won 20 regular-season games and at least eight SEC games had ever been left out of the NCAA Tournament field. Those are benchmarks Neighbors talked about throughout the season.

"We got a chance to celebrate the small victories," Neighbors said. "We celebrated the nine wins, the 10 wins. We had a great week planned and were almost to the end of that week. We were headed toward Selection Monday, but didn't get to the finish line.

"Maybe we don't feel as robbed as others. We'll talk about all that at the end of the season."

Neighbors said this situation epitomized something he's told many players, and that is to never take anything for granted.

"Whether it's the last game you played, your last practice or your last shot, you just can't take anything for granted," he said. "I also tell kids to control the things you can control. This is not a thing we can control."

Neighbors was complimentary of Athletic Director Hunter Yurachek and SEC commissioner Greg Sankey in the way that handled the situation.

"They are two of the smartest people I've dealt with," Neighbors said. "I trust them 100%. They have information others don't have. They are doing what's best for our student-athletes."