Hall of Famers soak up moment 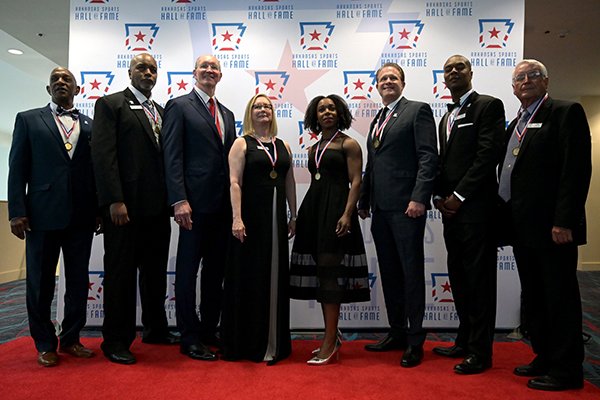 Despite the coronavirus pandemic that has put a halt to the majority of the sports world, Ike Forte wasn't going to miss his induction at the 62nd annual Arkansas Sports Hall of Fame banquet Friday night at the Statehouse Convention Center in Little Rock.

Attendance was limited to the inductees, their families and close friends and a group of former inductees because of concerns about coronavirus, said Terri Conder Johnson, the Hall of Fame's executive director.

Hall of Fame President Greg Flesher said he is confident life will return to normal soon.

"It's Friday the 13th and the stock market went up almost 2,000 points," Flesher said. "We are going to beat this thing."

Malzahn was a state championship coach at Shiloh Christian and Springdale before heading into the college ranks, where he became an assistant coach at Arkansas. He has been a head coach at Arkansas State (2012) and for the past seven seasons at Auburn.

But Malzahn said he wouldn't be where he's at in his career without his stops at Hughes, Shiloh Christian and Springdale.

The Fort Smith native appreciated becoming a part of the Hall of Fame.

"This is a huge honor," Malzahn said. "It was one of the best calls I ever got. If someone told me that I would be in the same Hall of Fame as Ike Forte and Jim Counce, I would have never believed it."

Of the All-American Red Heads players from 1936-86, 72 were from Arkansas. The Red Heads were the longest-running women's basketball team in history.

"This is an exciting and prestigious day for the All-American Red Heads," said Tammy Moore Harrison, the daughter of team owners Orwell and Lorene "Butch" Moore. "They were a historic phenomenon that spanned a nation."

Marvel, who coached at UCA for 24 seasons, was happy with his path to the Hall of Fame.

Tate paid tribute to his coach at Arkansas State, Nelson Catalina, who he said made the then-Indians a competitive team in the mid- to late-1980s.

"We weren't the most talented team," Tate said. "But the heart we had made up for it."

Campbell-Brown, who was a four-time All-American at Arkansas and an eight-time medalist in the Summer Olympics for Jamaica, said she was motivated to run at an early age.

"As long as I can remember, I was always fascinated by the fun factor of running," Campbell-Brown said. "So much so, I'd find a way to put running into my daily activities.

"I'd race the girls as well as the boys to see who could get from point A to point B. I can assure you that I got to the finish line first."

Lucas credited Fitz Hill, who was an assistant coach at Arkansas in the mid-1990s, for selling him on coming to Arkansas from Mississippi.

"They weren't great at throwing the football," said Lucas, who went on to catch 23 touchdown passes with the Razorbacks from 1995-99. "But Coach Hill told me that if I came to Arkansas and did what I'm supposed to do, you'll get to catch the football. And the rest is history."

Flesher also announced that the 2021 date for the Arkansas Sports Hall of Fame banquet will be April 9.